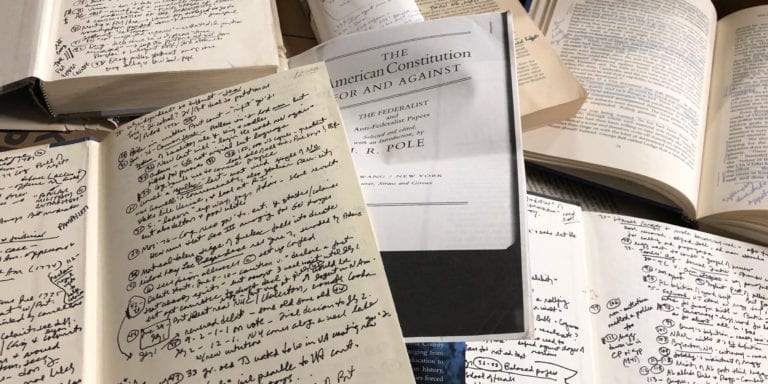 Forensic bookselling. I’ve done this so many times over the years. Accurate or not, it becomes a question of trying to understand the life of the person whose collection of books I am going through. These can be quite evocative. At the best, I get to go through a lifetime collection. From childhood and family books to the books the person acquired right up until their end. That human connection rarely adds value to the books. It does add to my experience. I’ve learned many life lessons from other peoples’ choices of books and bindings. Sometimes I know something about the person whose books I’m going through. We may have visited their home. Maybe I just know a name and place. Sometimes I know nothing. The collection is just anonymous boxes. Regardless, the person is slowly revealed as I triage their collection.

“You don’t want these. They’re all marked up and underlined. Some really good history though. The guy was a history professor. I could get them for free I think. But you’d have to pay me for transport. Nelson”

This was an email from Nelson Freck, regional bookselling legend. He was informing me of the results from an estate I’d referred him to in DC. We get a LOT of requests for house calls. We can’t possibly do them all. Frederick is a bit remote from DC and Northern Virginia. I send him emails with the phone messages detailing the facts as they were left—who, what, when, where, how many, phone number… Some messages are just a phone number and “lots of books.” Nelson contacts the person. If that call is at all promising, he will arrange a visit. After inspecting the books, he may pass on the books completely—they are simply not worth the cost of packing and transporting. If Nelson brings me crap books and charges me real money—well, I get grumpy. Nelson might get defensive and ask:

“Are you firing me?”

“No. I’m just trying to get on the same page with you—so we both come out of these deals in good shape.”

Wonder Book and Nelson have had lots of ups and downs over the years. But the salient point is Nelson has rescued millions of books over the years. He has helped keep the “Book Beast” here fed. We need constant supplies of books to keep people employed…and pay the mortgage and taxes and utilities and…

Sometimes Nelson will pay too much for a collection he felt was above average. Then the ups and downs start up again.

Most of the time he does just fine. (I HOPE he is not reading this. I wouldn’t want him to get cocky.)

He was one of the first booksellers I met when I opened in 1980. He was an experienced expert in collectible Mystery, Sci Fi and Horror. He called his shop Chaos Unlimited. We never would have dreamed that a lifetime later we would be having transactions for 10,000s of books every month. The market has changed so much. It’s about survival and doing something you like and are pretty good at. Most of all it is about the “book.”

So, Nelson was just doing his “due diligence” when reporting the results of this house call…

Maybe I’m a contrarian. That made me think…

Hmmmm…free books…but not free. How bad could they be? Nelson’s judgment is usually pretty good.

“Ok. I’ll pay for the delivery of the free books.”

It cost a lot to pay Nelson to pack and load and transport a couple hundred boxes.

We stacked them on 5 pallets and marked the boxes “Nelson Underlined” so they wouldn’t go to a regular sorter.

For some reason this collection intrigued me. 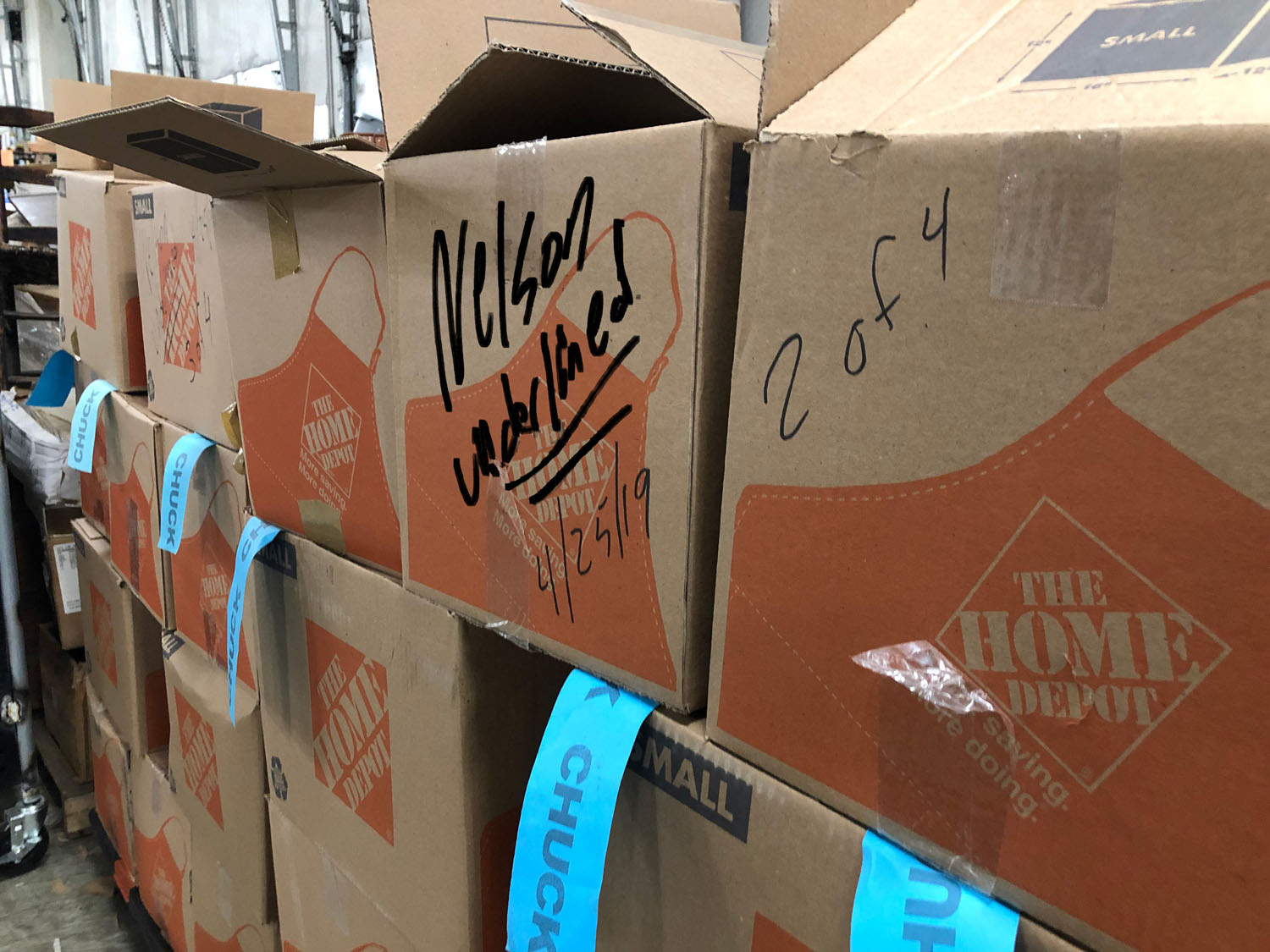 I decided to look at these myself—at least initially—to strategize the best disposition of this collection.

Really, how bad could the really good history books be?

Clif brought the first pallet to me, and I set myself up to work at triage—sorting the books. The pulp Gaylord was in front of me. I assumed a lot of the stuff would be too common and in poor condition. That is a deadly combination. There’s often no other option beside recycling. I had Bankers boxes to one side of me. Two rows of three. 95 cents. $2.95, $4.95, $7.95, $12.95, $19.95. Those boxes would go to the stores at those price points. I had yellow plastic “mail” tubs on the floor on the other side of me. Into those, I would toss books to go online. Books to be added as First Editions and books to go to “research” were put in different tubs.

I cut the tape that closed the first box and began removing books. These were great! You don’t see many biographies of Millard Fillmore, Franklin Pierce and other obscure presidents, politicians, crooks and creeps.

But, upon opening the books, almost all were brutally, frenetically, perhaps manically annotated on the endpapers as well as loaded with underlining and marginal notes throughout the text. 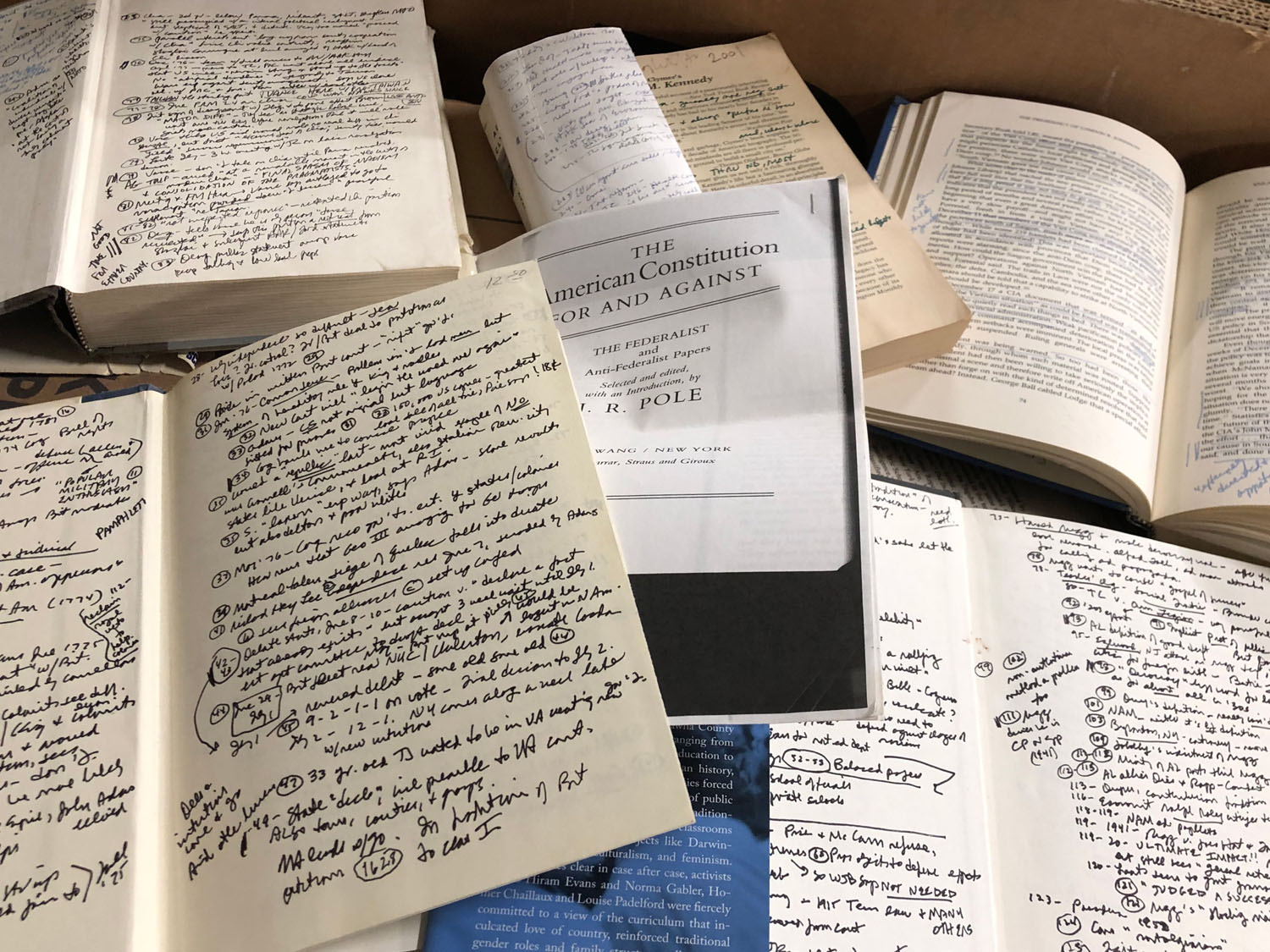 So, the dilemma became how badly were they defaced? Were they unusual enough that online buyers would forgive the damage? Or, should I send them to the stores where buyers could decide in person whether the desirability of the contents mitigated the ugliness of the inking?

It was fun. I handle hundreds or thousands of books every day—well, almost. When I come across one I’ve never seen, I get a little “zap” to my cerebellum or whatever part of the brain it is that responds to “juice.” Really, I should know which anatomical part brings me joy. I was a Zoology major in college. I was also an English major. Maybe that’s why I’m so distracted, confused…whatever. 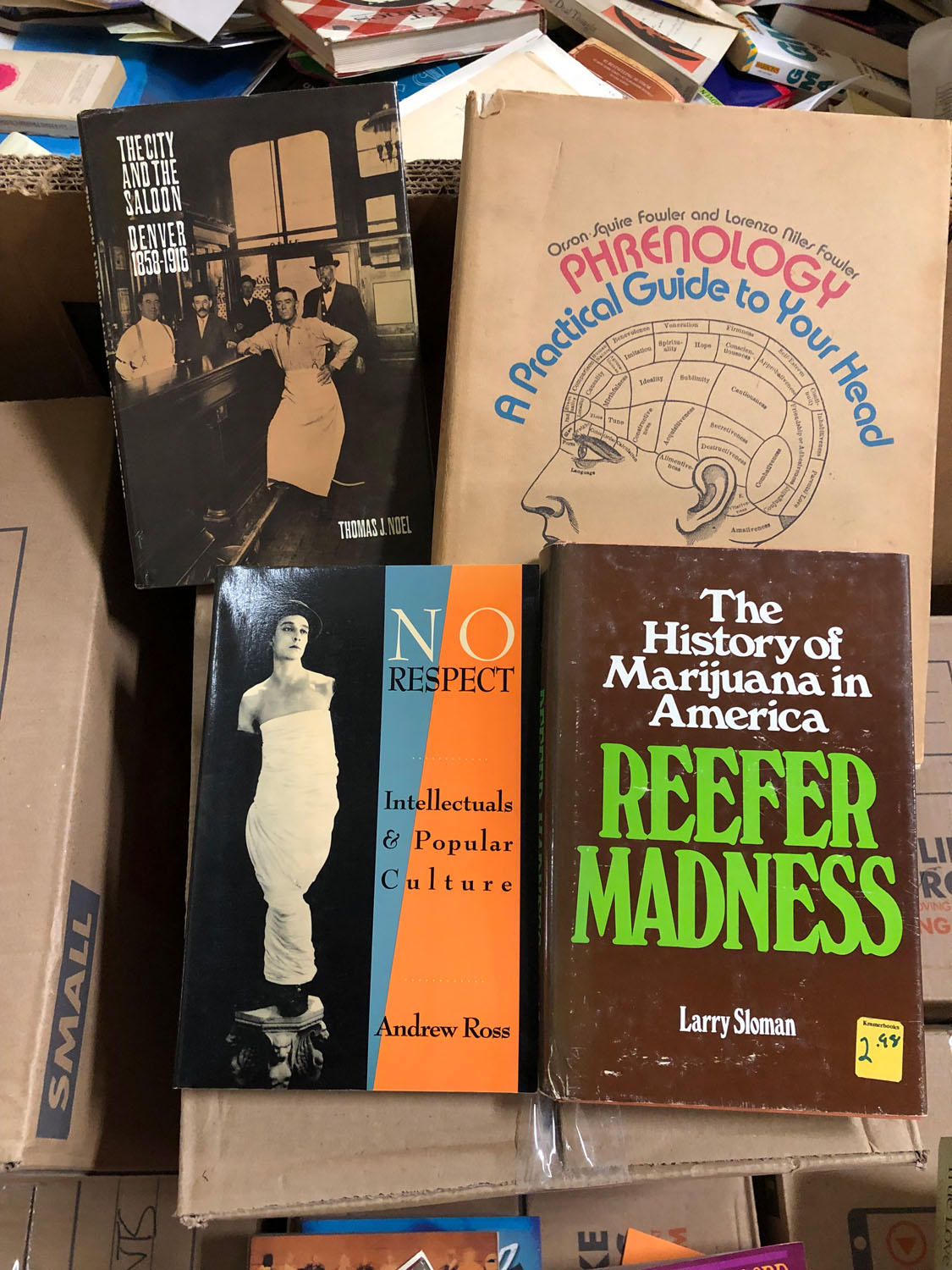 This collection had a LOT of titles I’d never seen before. That was a lot of zaps per hour.

To what end? Did he plan to go back and refer to these thousands of books on his shelves? Was he going to flip the book open again in the future and look through the hundreds of paragraphs he’d underlined?

It was clear to this armchair psychologist, there was some kind of bibliopathology going on here. Maybe the marking helped with his absorption?

And the books were SOOOO good.

I defaulted a lot to the stores. They can use the upgrade.

But the real exotic, obscure… I pushed to Data Entry to go online globally.

This is a kind of John Henry vs the Steam Engine scenario. My ego and experience vs the data crunching of our software.

It makes me feel relevant, I suppose.

Well, tough…if it doesn’t work, it costs me not them.

Maybe eventually we will lower the price enough that the books will go away.

Then I began coming across boxes with the word “Students” written in ballpoint on one of the top flaps. In these boxes, many of the books were often inscribed to “Leo.” Most of those were not inked up. Either he respected the gift or, maybe, the books didn’t interest him. 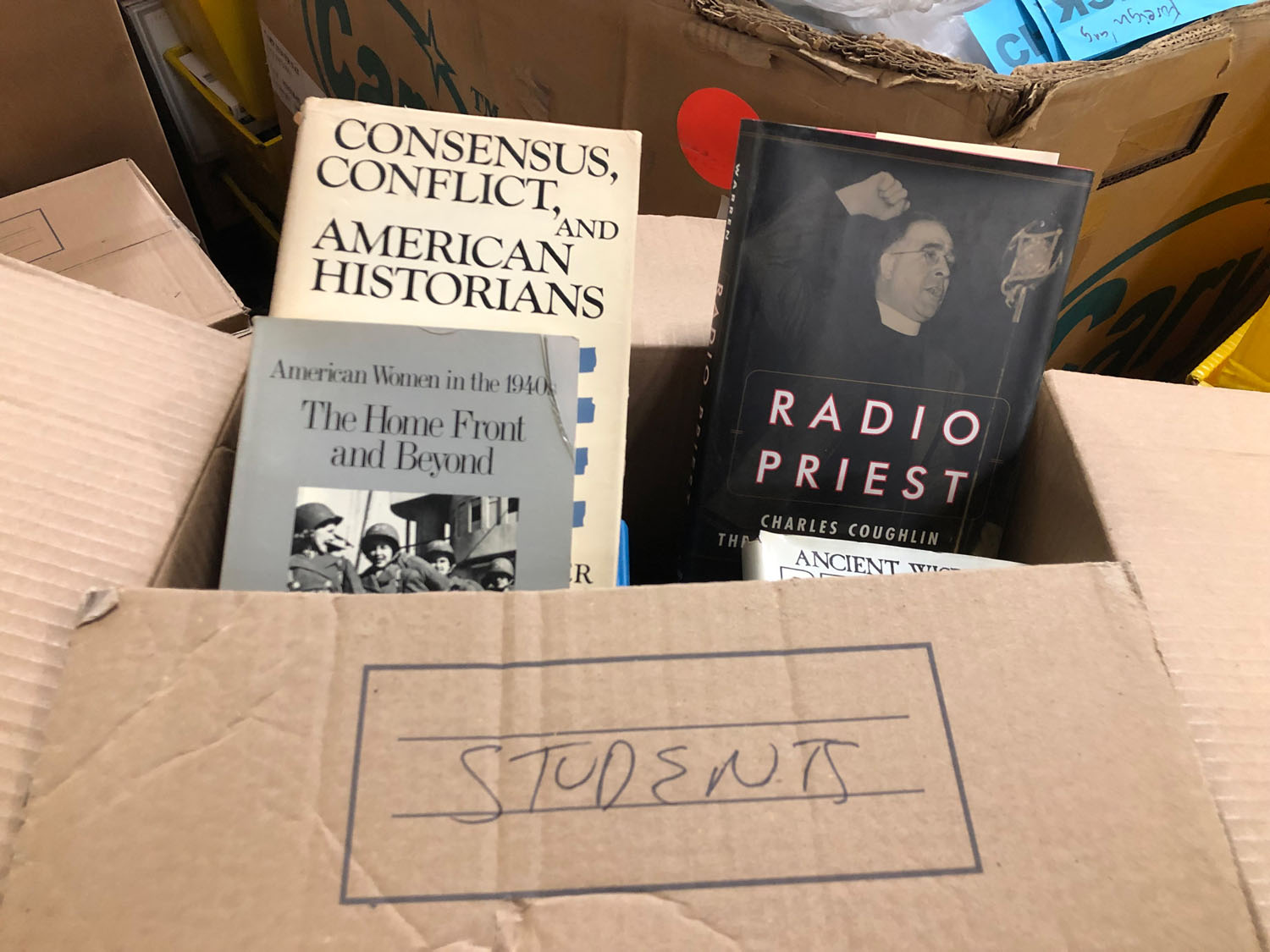 Now, in addition to being all inked up, almost all of his reference books were signed by the professor on the title or acknowledgement page. Illegibly. 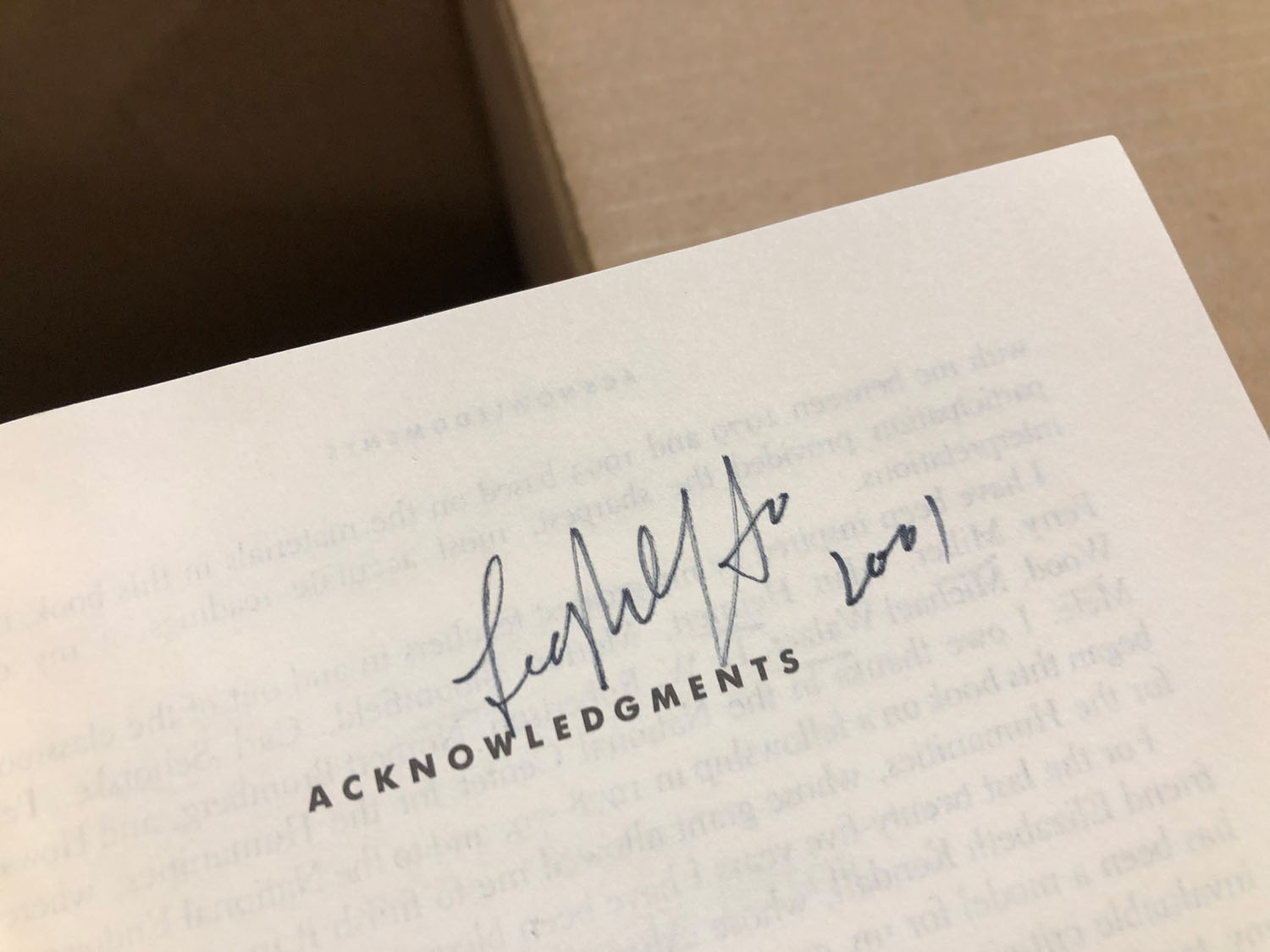 Who was this guy?

I didn’t get hooked until partway through the second pallet.

So many exotic titles. Not all were political history either. 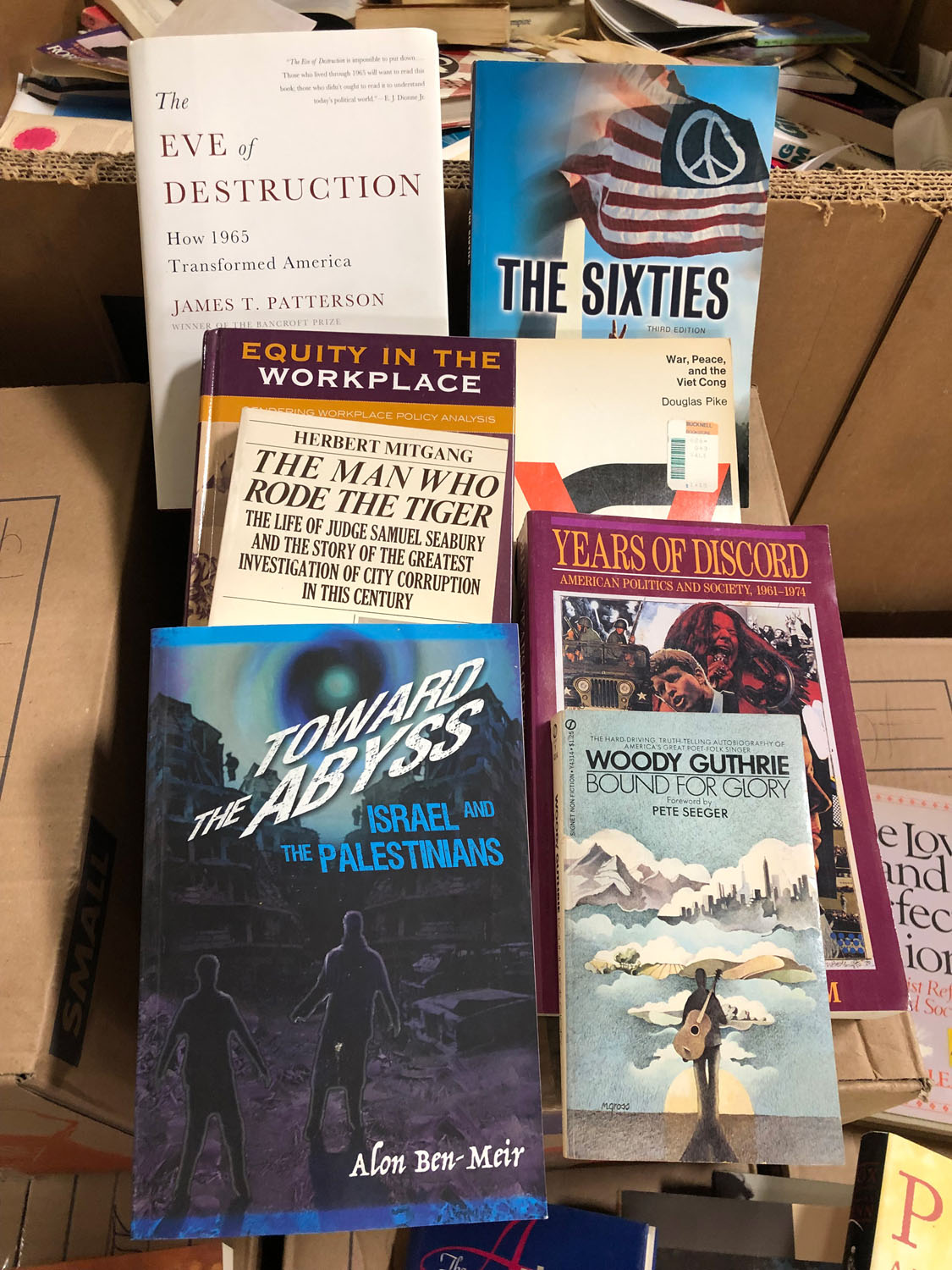 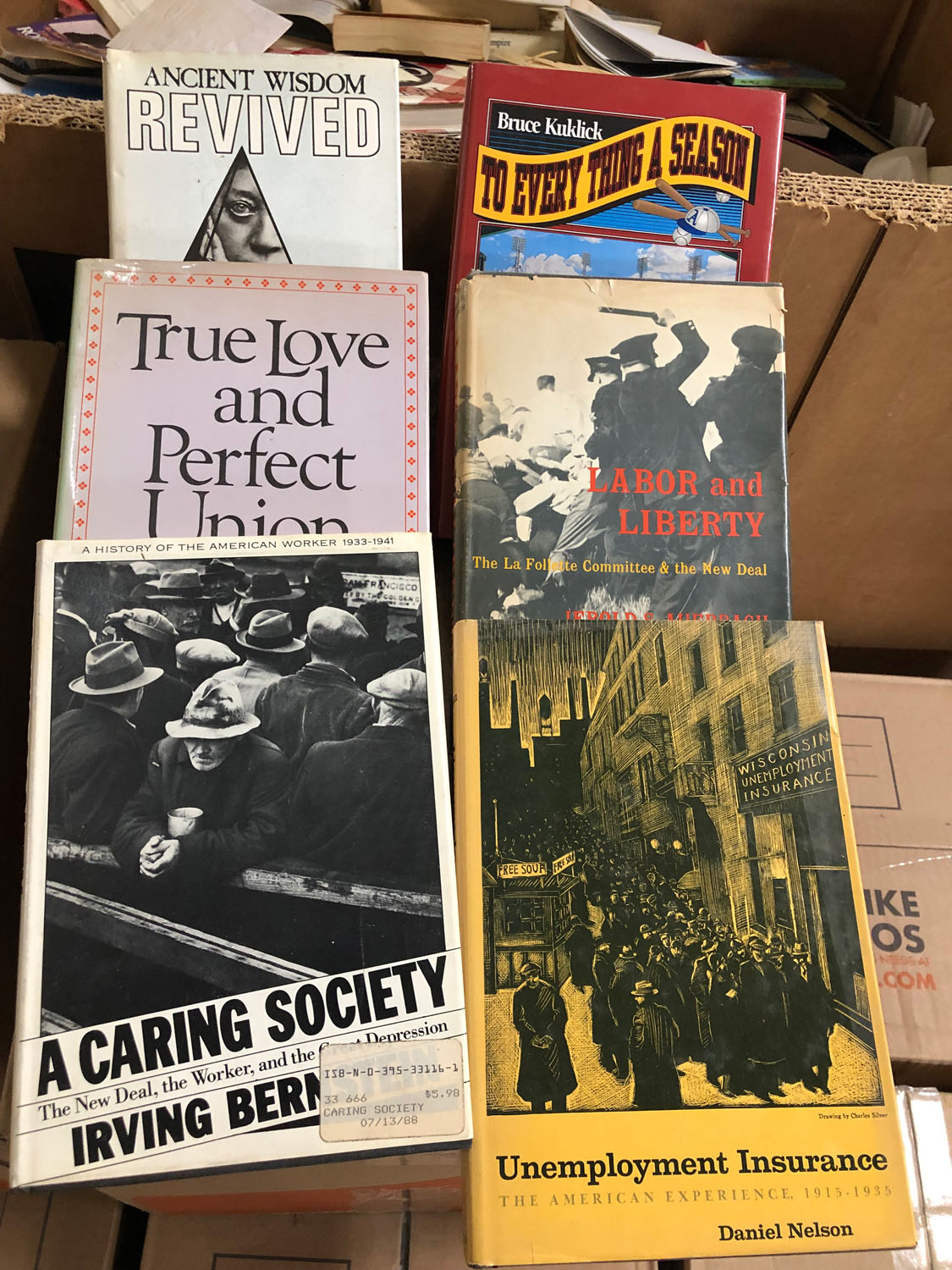 I finally came across a “Student” box where one of the books was inscribed using his full name. 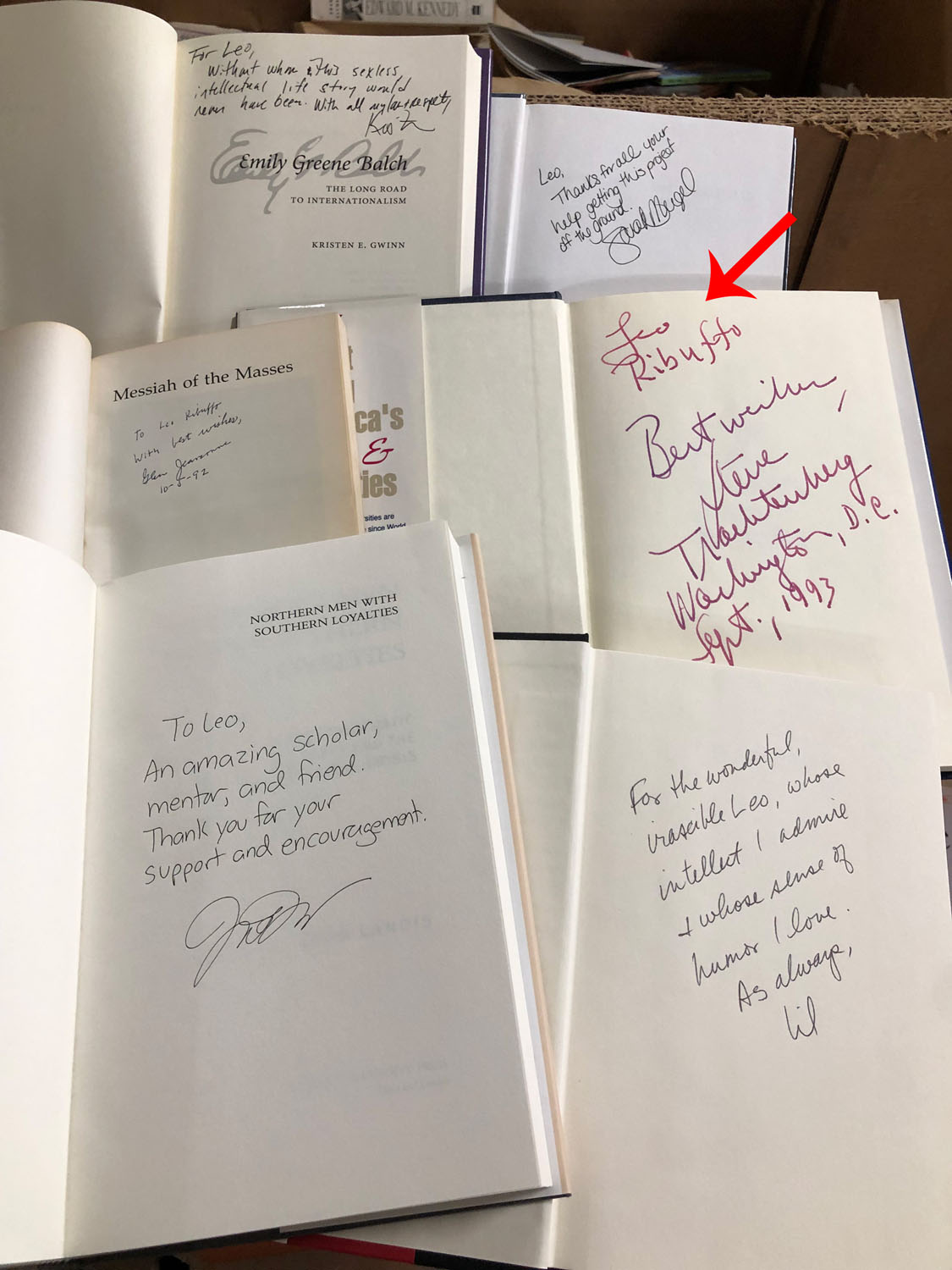 I stopped and went online. He had a Wikipedia page and Washington Post Obituary:

He was an advanced scholar. Yale PhD. Published. He taught high-level graduate school classes at George Washington University—maybe the epicenter of political scholarship.

But what struck me was his legacy. The 60 or so—so far—published authors who thanked and praised him for his inspiration.

And there are still 3 and a half pallets of boxes to go.

He must have been a very fast reader. I’m so envious. My pace can be painfully slow. I haven’t read near as many books. And I’m sure he got rid of some over the decades….

I bet I’ve read more titles than him. So there!

Anyway, Leo, I was at first kind of concerned about you and your reading and your treatment of books. Then I discovered your beneficence to your students and colleagues. And those I’ve seen are just the tip of the iceberg!

He never had kids, but he certainly left a lot of descendants.

I am glad I got to know you.

I’m glad I took the chance and rescued your problematic book collection.

I’m pretty sure we will do ok with them financially. But what do I know? I better consult the computer here.

Unfortunately, almost none are viable as Books By the Foot. So these books have to sell themselves to readers and collectors near and far. We will give them stages. It is up to them to perform and find themselves new homes.

Searching online I found some more articles and reminiscences.

This one was very fun—penned by a former student—now an accomplished historian.

Our booze-soaked conversations eventually always found their way to topics of real substance: politics, history, philosophy, religion—”pointy-headed intellectual stuff” in his words. At our most recent get-together I was so focused on the discussion about Trump and how he ranks against other presidents (not nearly as bad since, unlike many others, he has yet to launch a war that kills millions,) and so enjoying our deep dive into Niebuhr, Marx, William James, Cotton Mather (longue durée, natch) that I would not allow myself to interrupt the conversation to use the bathroom even though by that point I had had several pints. Too much information? Nah, this puts my emotions in material form. I so cherished the uninterrupted banter that, by the time we departed the bar, my bladder was on the verge of exploding. Given that Leo died less than a week after our final discourse, I have no regrets.

I first met Leo in January 2002, when I walked into his research seminar on the 1960s. As a budding Marxist who came of intellectual age immersed in Howard Zinn and Noam Chomsky, I didn’t think I had anything to learn from a cranky Niebuhrian, William Jamesian, neo-isolationist, unreconstructed McGovernite—especially since I wasn’t equipped at that time to even make sense of these confusing and dare I now say contradictory labels that Leo had given himself. Was I wrong! Leo quickly became my best teacher, and remained so to the end. Whenever I think I have something figured out, I tell myself, yes, but, what does Leo think? We as historians would all do well to ask: What would Leo have thought?

I think I would have enjoyed sitting in on the intellectual pub banter as described. I’m pretty sure I would have just kept my mouth shut and enjoyed the “opera”—even if I didn’t understand much of it.

He touched and improved many, many lives. That is a life well lived…even if he was a book brutalizer.

Here’s the rest of his colleague’s reminiscence: 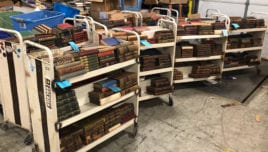 Two of the recent book stories have been a bit introspective. Thanksgiving and Christmas are times for stopping awhile... END_OF_DOCUMENT_TOKEN_TO_BE_REPLACED