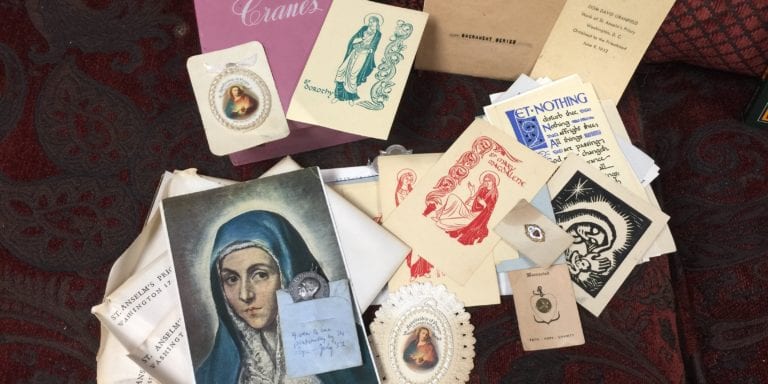 This happened in January 2015, an Ohio colleague, Owen Kubik, who specializes in rare Catholic books and ephemera, referred me to the estate of two priests. He had been there and taken what he could, but he told me there were still a lot of books left. A LOT. I went with Clif, the warehouse manager, and another helper, Carl. Clif and Carl will appear in future stories I’m sure. Clif has been here through good and bad since 1989.

The site was a high-end apartment building in Chevy Chase on Connecticut Avenue across from the Congressional Country Club and backing on Rock Creek Park. The priests’ personal representative and the bank/estate representative met us in the lobby and took us to the apartment. On the way, we got a bit of the story from the priests’ rep. One brother (they were natural or biological brothers) died a few years ago and the other recently. She had known them a long time and was still upset about it. She teared up a bit as we walked (and walked) and talked. For not only was this apartment on the 8th floor, it was at the very farthest end of the most distant wing of the huge apartment complex.

The corridors were very wide and plushly carpeted. Antiques and stylish accents adorned the halls. Ornately framed prints and mirrors lined every wall and turn. The wealth and upper class vibe in Bethesda-Chevy Chase is palpable. I think I’ve read somewhere it is the wealthiest square mile in the country.

When the door was opened, I immediately recognized the symptoms of bibliomania. Odd shelves lined and narrowed the foyer and halls floor-to-ceiling in the large two-bedroom complex. The dining room, bedrooms, closets—everywhere a bookcase could be shoehorned in—they had inserted one. If my colleague had removed many books, it wasn’t apparent. 8,000? 10,000? 12,000? It was impossible to estimate numbers with so many books stacked in nooks and crannies.

Everything else was as it had been left—clothing, odds/ends, and the materials of daily life.

The estate rep left us, saying to call when we were done so she could come lock up. We went down and pulled into the parking garage to be closer to the elevators. Soon a maintenance engineer was gesticulating at us.

A loud “SCRAPE” came from above me.

In fractured English made it clear that vans were not permitted in the underground.

He indicated we needed to park outdoors—up a sloping drive and a couple hundred yards farther from the elevators.

I slowly “scraped” my way backward and out into the sunshine.

I went to the office and spoke with the building manager who concurred, and I almost bailed on the deal. Each load would have to be carted from the far end of the top floor to the van parked way out on the curb. It would be a quarter mile. Each way! But I didn’t want to let down my colleague and—something else—urged me to take these books that would most likely be trashed otherwise. I called the banker and described the scene and we negotiated a very low “removal” token price due to the excessive labor involved.

We got packing. There were Catholic accoutrements everywhere in the apartment. Christ, Mary, popes, doves, lambs, God, bleeding hearts and religious historical figures stared down at me from all the walls.

I started in the recently deceased priest’s bedroom, as the books in there looked most interesting. I spent most of the day on my knees putting books in boxes. It is the familiar book buyer’s position of biblio worship. I’ve spent years of my life in that position. Clif and Carl ran my loads to the van as well as their own, so I was alone in the apartment for much of the time.

The brothers had lived there for decades. Dust would pour off books on lower shelves or on cases landlocked by other furniture in front of them. It was so cramped in the room that I’d set each box I’d pack out in the hallway for Clif or Carl to roll away.

I enjoyed the day. I don’t get out much anymore. I’m usually tethered to the mother ship—the Wonder Book warehouse. The books were good. Lots of theology, mysticism, books on the “spirit,” literature, philosophy as well as Church history (Latin and English) and “current” Catholic (over 50 years) events.

The brothers/Brothers/Fathers had lived through all the changes of the 30s, 40s, 50s, 60s…and into the new Millennium.

I felt very serene, contemplative, calm, and peaceful all day. I just packed box after wonderful box. We managed to get two-thirds of the books out by the time the vans were full. The estate rep met us and locked up, and we scheduled a time to return for the rest.

I’d noticed several books were by Reverend David Granfield and that there were a couple boxes of each in brand new condition.

I contacted Owen, and he explained both brothers were scholars. Reverend David Granfield, the recently deceased, had gone to Harvard and was a lawyer and professor at Catholic University. He also had a Ph.D. in Theology. The other brother, Patrick, had been President of the Catholic Theological Society. They were Benedictine priests and both had been well known in their day.

The second trip I was tied up and couldn’t go. I sent Clif, Carl and Ernest. Ernest is the “Book Manager” here who, along with me, sorts most of the potentially “better” books. He’s been here 12 years and is an interesting character—Jewish, Catholic and a Che Guevara aficionado, cynic, iconoclast, former (and still occasionally) swearing, screaming, restaurant chef…among many other things. He has a big Coelacanth tattooed on his arm and what looks like a “Kilroy Was Here” image on his calf. I’m not sure what either mean. But he’s always been a no nonsense kind of guy—with me as well as subordinates.

I went out to the docks to see how it went and if they’d removed everything they were supposed to. Ernest was nervously puffing on a cigarette and leaning on a railing on the ramp to the dockyard. He saw me and sidled over and asked if I’d noticed anything unusual when I’d gone to the apartment.

“You didn’t see anything there?”

“Books and dust and Catholic stuff.”

“There was a guy there.”

He took a deep breath and then a deep drag. He said he had been spooked a number of times. Each time he passed the threshold of the priest’s bedroom, he’d seen, from the corner of his eye, a man sitting on the bed. It was the room I’d spent the whole day in. On my knees.

“It was an old man. He was sitting on the edge of the bed staring out the window to that big park beyond.”

I got a bit of tingle up my spine. I said I hadn’t seen or felt anything.

I had had a deeply contemplative day. The calmness and serenity of sharing a space where disciplined and contemplative lives had been spent. I had attributed the sense of peace to the space and the genres of the books I’d handled all day.

I went through the brothers’ books myself over the next week. We call it “triage.” It’s a pretty complex formula designed to get each book to the best possible place. I wanted to see the books again. I really enjoyed handling their collection. Forensically, as so often happens, I learned parts of both their lives. From childhood and youth through 60 years of service; their travel, hobbies…

Later that day, Clif and I rode over to pick up our truck from being serviced. I asked him about the two days he’s spent at the brothers’ apartment.

“Did you notice anything weird?”

“Yeah, it was like there was a guy sitting on the edge of the bed right next to where you were packing. Carl wouldn’t go past that room after the second load. He started hauling his books out the back way through the kitchen and dining room. I was glad you set the boxes you packed in the hallway. I didn’t want to go in there.”

MAJOR tingles and hairs rising on the back of my neck.

“Uhhhh, why didn’t you say anything to me?”

“I didn’t want to freak you out. And I just don’t believe in that stuff. Did Ernest tell you he asked me to close that bedroom door after we’d been there an hour or so?”

Heightened Consciousness: The Mystical Difference, one of the books David had authored. Had he learned some secrets? THE secrets?

I suppose if anyone could stay on past death until he was ready to go, it may have been someone like David. He loved his home and his books and his accoutrements. Maybe he just wanted to see them safely out before he moved on. Maybe he so enjoyed the vast parkland views he had spent most of a lifetime contemplating he just wanted a little more time with them.

I’m glad I didn’t see whoever or whatever was in the room with me. I don’t think I would have handled it well. Maybe if I’m ever in the same kind of situation, I’ll look for…something.

No Probably not a good idea. 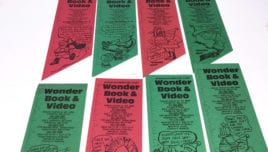 Once upon a time there was a young bookseller. He had opened his bookstore with $1000 and a blind leap of faith... END_OF_DOCUMENT_TOKEN_TO_BE_REPLACED