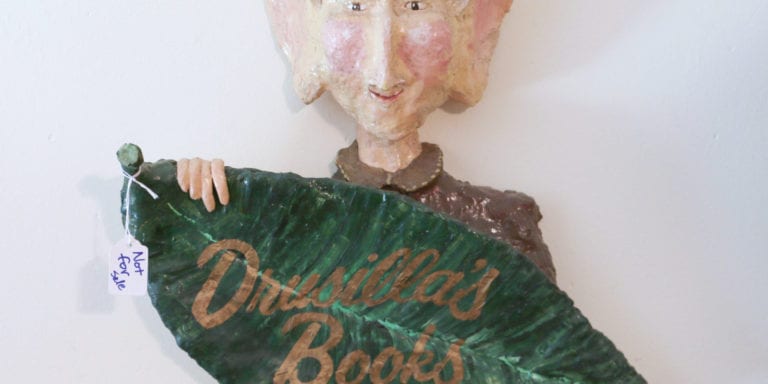 All good fairy tales begin with “Once upon a time…”

Once upon a time, I was a very young bookseller. I busied myself about my fledgling shop stocking shelves and building bookcases from #2 Pine 1x8s and often wondered if the store would last another few months or a year…

As the first of each month loomed, I’d tally my checkbook to see if there would be enough to pay the landlord. I’d add back in my uncashed paychecks to get the balance high enough.

Back then, there was a bell on the front door to warn me if a customer was coming in. If I was building bookcases, I’d put down my tools, untie my carpenter apron, and head to the front to see if they were buying or selling or just looking.

The first couple years progressed, but the bank balance didn’t seem to. There weren’t profits. Just bills, and sometimes enough money to buy more books and fresh lumber for more shelves. Other booksellers were always welcome. They often bought more than one book. Sometimes a LOT of books. Many seemed to appreciate my lack of experience and knowledge.   🙂   And though I used to presume any book I sold to another bookseller was a mistake—that they had knowledge I didn’t and would make a lot of money from that—that was ok. I would learn from their buying habits.

And I REALLY appreciated their checks!

Drusilla was one of those early visitors. When she entered the store, the lights seemed to grow brighter. She was always impeccably dressed in cozy, classic, “English” clothes. The kind of clothes you’d expect someone who buys and sells rare children’s books would wear. She had lots and lots of hair and she would roll or twist it high upon her head. The twinkle in her eyes and magical smile made me wonder if there wasn’t a bit of fairy in her blood.

Soon little piles of colorful old books would appear on my little, wooden, sales counter. Fairies and folk tales. Myths and legends. Nursery rhymes. Oz. Uncle Wiggly. Thornton Burgess. Randolph Caldecott. Tolkien. Tasha Tudor. King Arthur. Christmas… Mostly books that careful children had held 60, 70, 100 years before. For she would only take near perfect copies of the books she sought. But if it was close enough to perfect and she wanted it, she would snap it up and never haggle about the price.

I would carefully pack her purchases and carefully put her check in the fishing tackle box that served as my cash register in those days. I would bow slightly and gently take her hand.

She would leave, and I would feel a quiet void. It seemed the store became a little dimmer…as if some of the light left with her. Well, she had taken some of my brightest books.

And my monthly financial needs would likely be taken care of. Maybe there’d be a little extra as well for a dinner out and some more #2 Pine 1x8s.

Years passed, and Drusilla’s visits continued. Wonder Book did grow. One year, I installed glass cases for the better books. The cases showcased the best stock and protected collectible books that had survived the tests of time from careless handling. When Drusilla came in, I’d unlock the children’s cases and set a basket on the floor before them. Heck. I’m sure I unlocked every case! Just in case.

I’d pass by now and then, and if her basket was filling, I’d bring her another.

And then the Internet happened. We sold our first book online in 1997. Soon sales at the stores began to drop while mail orders from web orders skyrocketed. We rented a little warehouse to accommodate books that were available only online.

Bookstores in the DC region began closing. We’d get calls to buy their remaining stock after they’d had their going out of business sales.

I spent less and less time in the stores and focused more on the warehouse. It expanded, then moved to a much larger building. Expanded there, and then in 2013 and 2014, we acquired and moved to our current incarnation—3 acres under one roof. Fairy tales may seem unrealistic but there you are—it happened.

Books kept pouring in. I lost touch with a lot of booksellers and regular customers. Usually, until there was bad news. Closing, retiring, moving, illness, death… I’d see books come through that had been purchased from us years before. I was often able to match a collection with a name and face.

Now it is August 2017. I haven’t seen Drusilla in 15 years I’d guess. Did she visit the stores in the interim? I don’t know.

I got an email from a colleague who told me Drusilla and her husband Penn were ill and in assisted living. Relatives were helping to clear out their home. Some years earlier, she had moved her perfectly lovely, children’s bookstore, Drusilla’s Books, from downtown Baltimore into the basement of the house.

“They’ll probably call you at some point.”

And I was called. By her niece.

I went to Lutherville and met her at Drusilla’s prim and cozy, Victorian home. There were gardens in back. The beds were still in good shape, but you could tell that if elves and fairies had once lived in them, they’d departed. The family had had a tag sale and online auction, but there was still a lot of stuff in various rooms upstairs and down.

Drusilla had several thousand books perfectly placed on shelves in the ancient, whitewashed basement. I pulled one after another. Each was a beautiful children’s book—frozen in time. If it had a dust jacket, the jacket would be wrapped in mylar. Childhood preserved and showcased. Waiting on these shelves for the next owner. Waiting for the next caretaker to acquire this vestige of a long ago childhood passed. That former child to have and hold the book, protect, and preserve it and, when that time comes, pass it onto the next once-upon-a-time child.

Fairies and folk tales. Wales and Scotland. Myths and legends. Tristan and Isolde. A first edition of The Brave Little Toaster! Tolkien. Brian Froud. N.C. Wyeth. Howard Pyle… We found many of the books were signed. Some had autographs and little drawings by the books’ artists.

Oddly, she had hundreds of children’s books in German! That’ll be a tough sell. So much Der Struwwelpeter and Max und Moritz.

I made the offer on them all, and it was accepted. We began carefully boxing the books and carrying them up the steep, basement steps and out the storm doors. I bumped my head getting outside one, two, three times or more. I was too often thinking about…but…no…she couldn’t be here watching this…

“There are some books, and book related things upstairs…”

There were some lovely framed and signed prints and posters. I made offers on a dozen or so.

“These four boxes, the family had thought of keeping. They are all Robin Hood books. One of their children was named Robin. Would you be interested?”

A built in case in the dining room was filled with about twenty pairs of bookends. Each had a tag on it. $100, $200—too much for me, although I know bookends can be highly collectible.

“I can’t do anything with those,” I thought.

A big, red basket held over 100 miniature books strung so they could be hung on a Christmas tree. Drusilla likely had a Christmas tree in her shop and would hang these little books as ornaments. How fitting!

There was a lovely, little, oak book truck as well.

“I have no need for that,” I thought.

There was a deadline as well. The niece was returning to Tennessee in a few days.

I ended up returning a second time a couple days later to clear up the last books.

The wooden book truck? Well, it is here in my office. I couldn’t leave it and risk whichever charity received it as a donation to think it was just an odd wheeled cart and let it go someplace “unbookish.”

The estate can be cleared. The house emptied—no longer a home—sold.

But her books are as bright and cheerful and full of fun and color as they’ve been for decades and decades.

And we will do our best to get them to the next caretakers in the same bright condition they’ve been in since the children who first owned them let them go. There’s no reason why all of them wont look exactly the same in 100 years…with proper care.

I know many will go on far into the future for, as objects, they are beautiful and timeless.

These books of youth and magic will stay Forever Young.

Well that’s the fairy tale. Not all have happy endings. But this one, I hope, has a little of both. 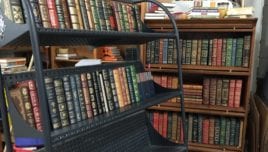 Millie, Mickey, Wallpaper, the Doctor, DC and Downsizing: A few of the stories of people and books at Wonder Book in the last week... END_OF_DOCUMENT_TOKEN_TO_BE_REPLACED