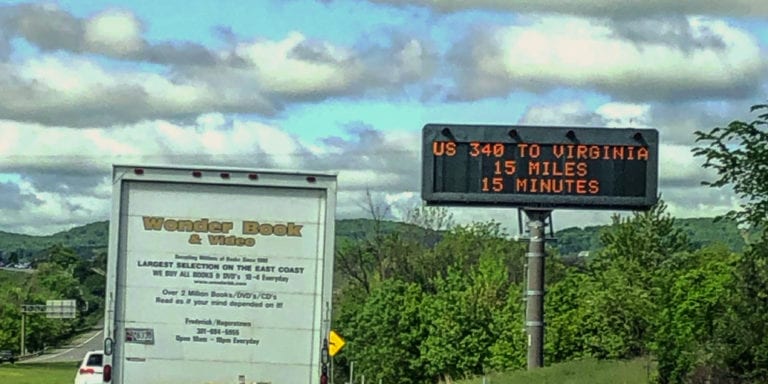 Therefore, spring is our “Pickup” season. We pick up the leftovers from library and other non-profit book sales. This morning we were heading to the Reston Virginia Library. 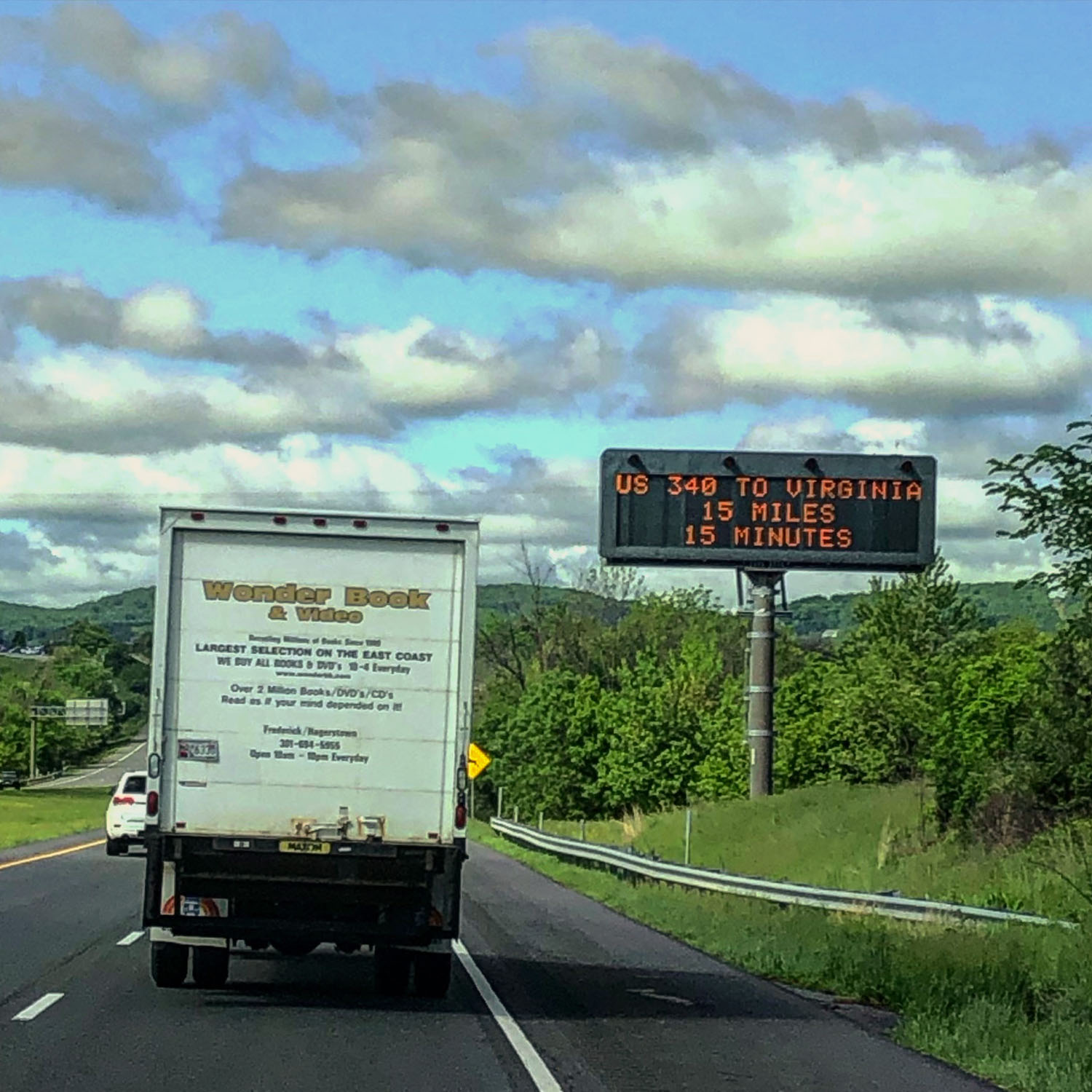 South, across the Potomac and into Loudon County. There are signs for 8 or 10 wineries between the Potomac and Leesburg. This county now has 44 wineries. Virginia has 276. The state is 6th—behind California, Oregon, Washington, New York and Texas. Texas? Who knew? I don’t think I’ve ever seen a Texas wine. Virginia and Maryland wine used to be pretty bad—often sickeningly sweet using Concord grapes or various non-grape fruits. It was like drinking liquid jelly. I used to have buyer’s remorse any time I’d had one too many samples and actually took some bottles home. I’d open one sometime later:

“Why on earth did I buy this? What was I thinking?”

There was an ongoing joke that friends would regift the same bottle of Maryland wine for years.

Nowadays Virginia and Maryland wines can be pretty good. Sometimes very good. A friend with pretty good taste tells me this one is excellent. So, I won’t be regifting this. 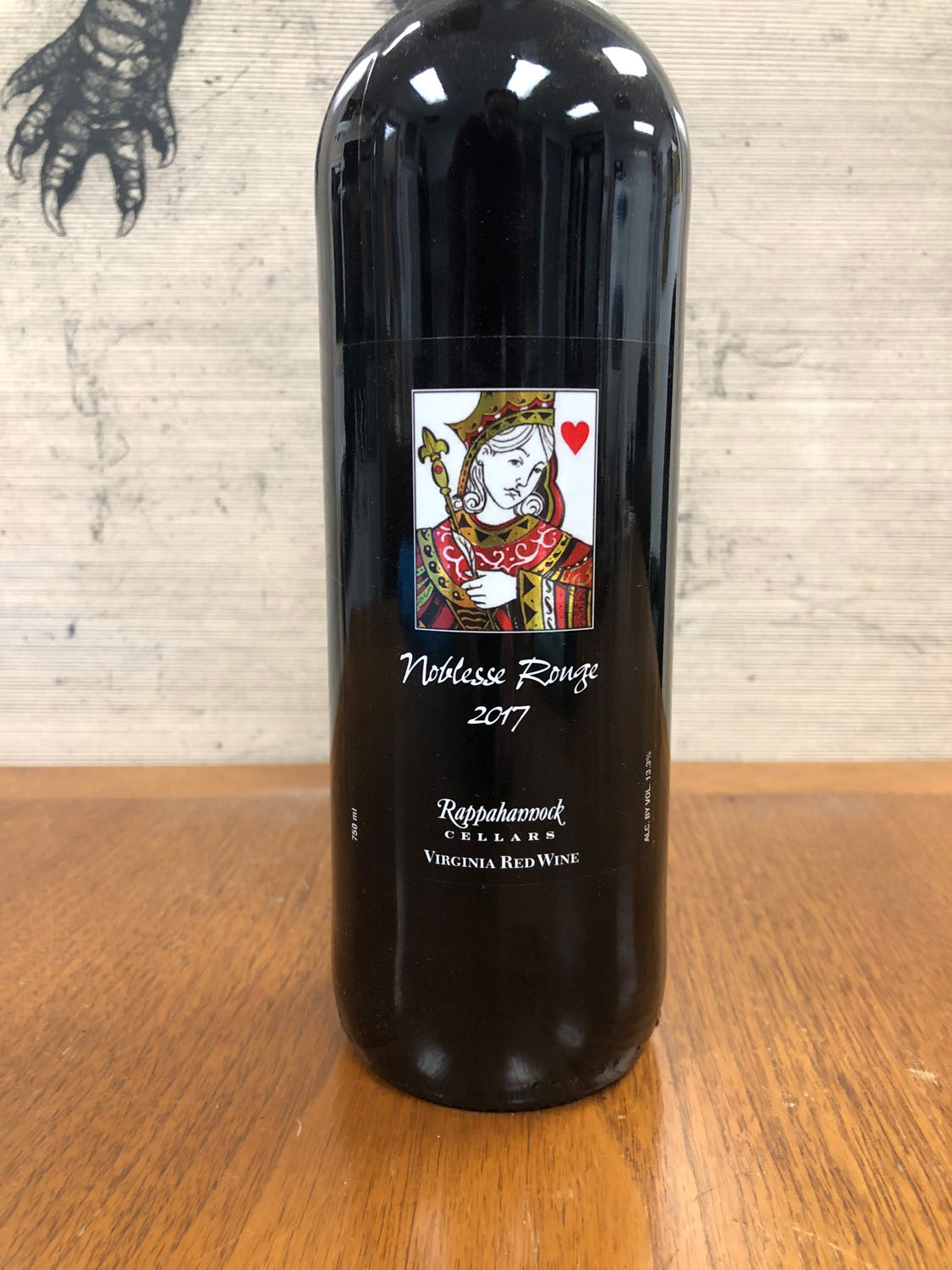 The wineries are often fun to visit. Especially in the spring or fall when the air is cool, and it is comfortable to sit outside and sip with the vineyards surrounding you.

But I’m still pretty snobbish. I prefer to think of my wine coming from sun drenched dry flinty hillsides in France or Italy or Spain. Old books, old friends, old wine, Old World… And, please, no twist tops if at all possible. If I’m out at a restaurant and a bottle is presented with a twist top, I’ll usually ask for something different. There’s just something about spending a lot of money for a bottle of wine and watching the server twist a metal cap off that is a turnoff to me.

And cork is a renewable natural product. It can be harvested from the trees every 7-10 years without harming the tree. If there are not enough—grow more. When I was a kid, I loved pistachio nuts. Back then almost all came from Iran and were quite expensive—I mean REAL expensive for a kid. I’d buy a little plastic bag of Zenobia’s and most of my allowance was shot. For some reason, the shells were dyed pink. After a bout with them, my fingers and lips would be pink. Then the world market got involved. Trees were planted. Now the United States is the top producer followed by Iran, Turkey and China. You can get them from Costco for about $6 a pound. That’s “peanuts”! Supply and demand…and supply.

Though we’ve been buying the Reston Library sale leftovers for many, many years, I’ve never gone there. I have a great email relationship with Charly and Anne. Charly especially keeps my feet to the fire. Beginning some months prior to the sale she will send me reminders.

“The sale takes place on … You ARE coming aren’t you?”

Anne and Charly have visited both warehouses a few times over the years, and I’ve always gotten great big hugs from tiny Charly.

She is a gem and has rescued millions of books in Reston over the years.

They were both surprised and pleased when they saw me get out of the van.

It was a brilliant spring day. All kinds of different people were streaming in and out of the building. This library is extremely popular. 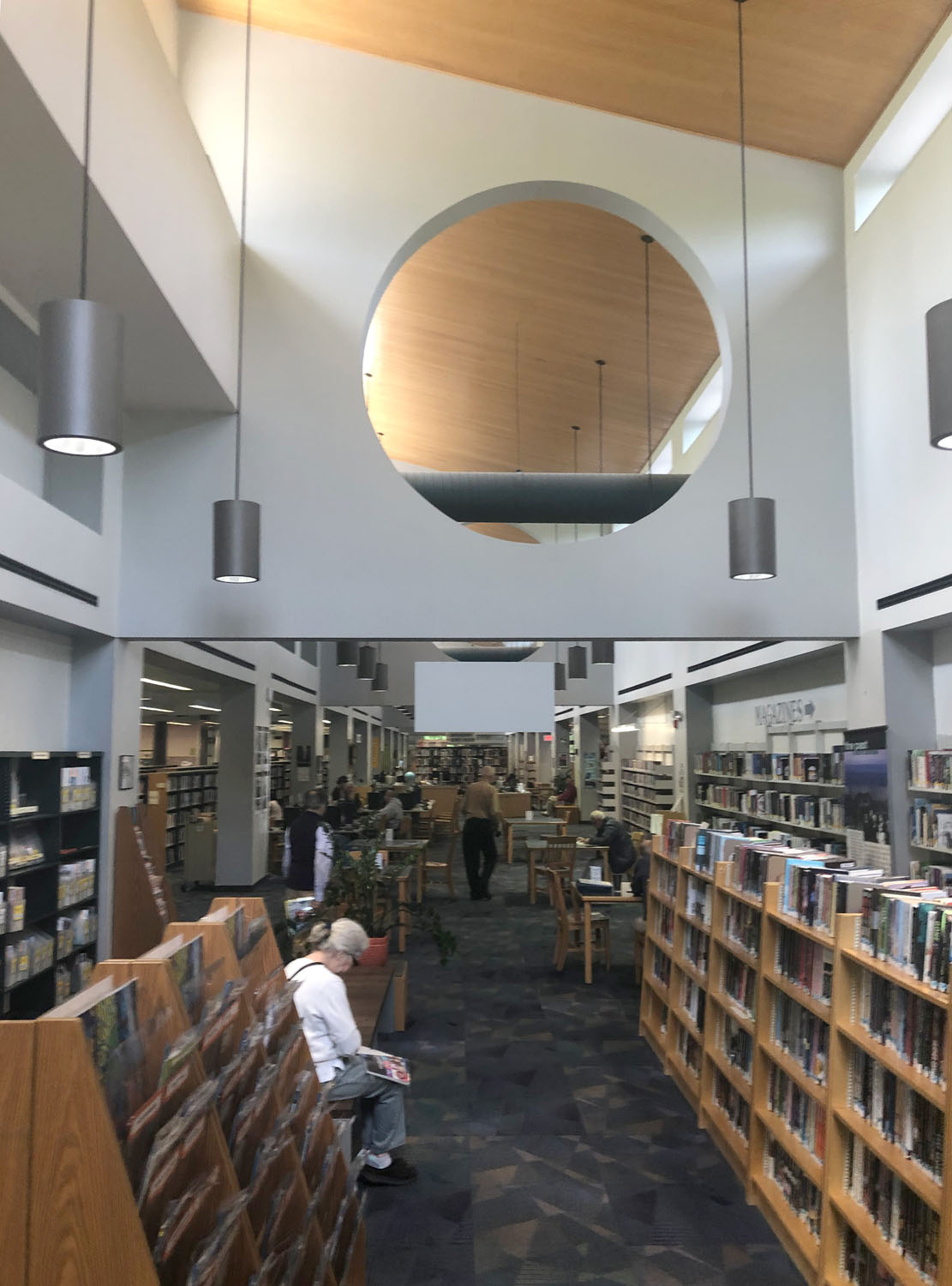 We went into the room where the sale was held. All the leftovers were boxed and stacked against the wall. 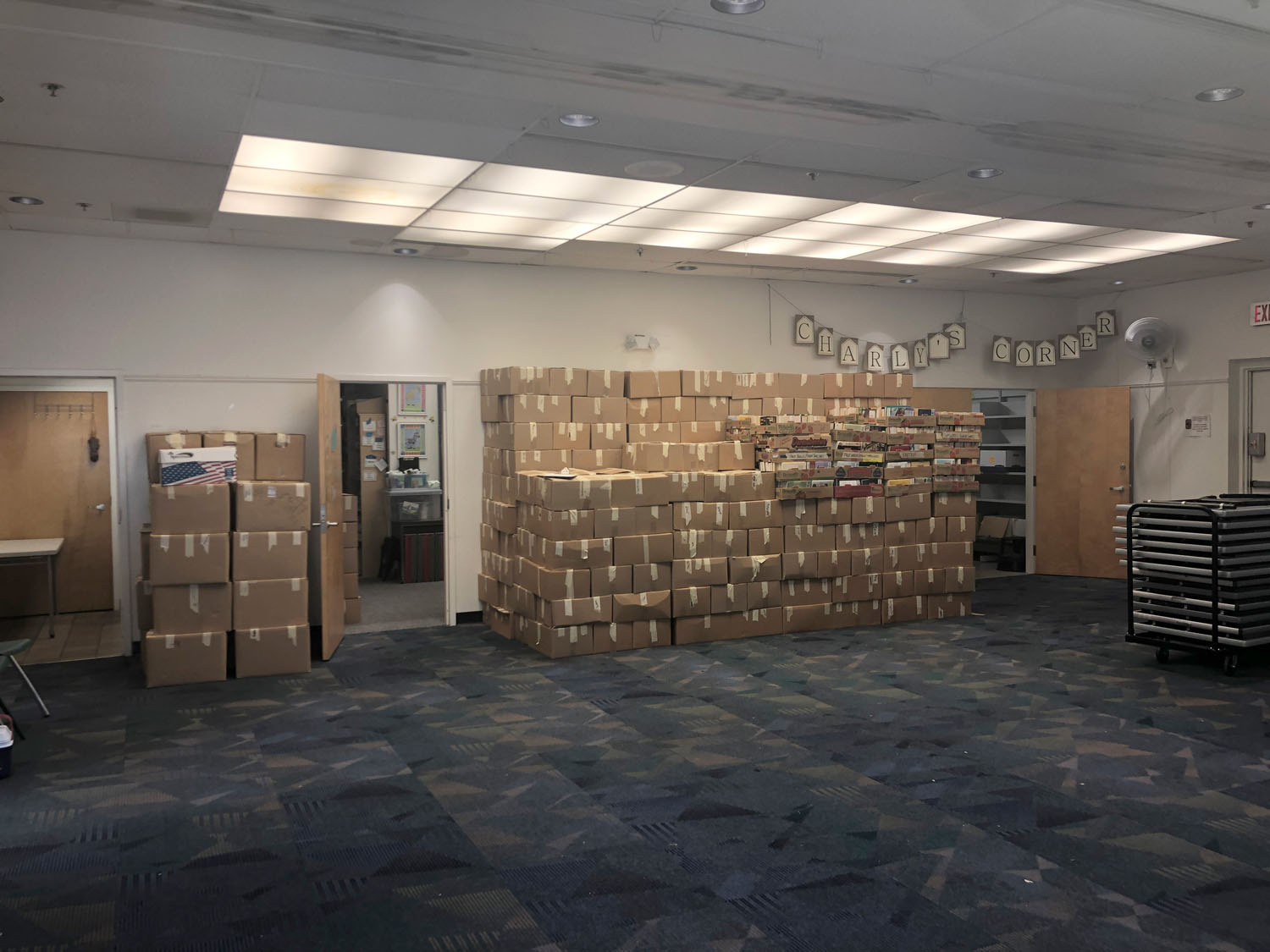 So, the process began. We would stack 4 or 5 boxes on the 4 two-wheeled hand trucks we’d brought. We’d tip them back and roll them out the door, into the sunshine and down the ramp.

Two of the volunteers kept separate tallies of each box we removed. Every sale has different protocols. This one keeps score.

There were four of us. The tally she sent says we took 622 boxes.

They were NOT amused.

Either way that means we made about 120 trips in and out. So, about 30 round trips per person.

There were so many patrons going and out that we had to be careful not to roll onto any of them. Our path took us across the flow of foot traffic. A couple of the guys preferred bumping down the steps. I choose the smoother path. I’d roll down and up the ramp.

One older gent slowly rolled his small suitcase down and up the ramp many times too. His suitcase was named “Wisdom.” I had to slow my pace and contemplate wisdom numerous times.

The big box truck’s deck is about 5 feet off the ground. It has a power lift gate. We’d roll the hand truck onto the gate and then push the button to raise the platform. Once at the top we would roll the boxes to the front of the “box” and then slip the tongue of the dolly out. Then back to the back of the truck, onto the platform, push the button and descend to the ground. Then back inside the building for the next load. 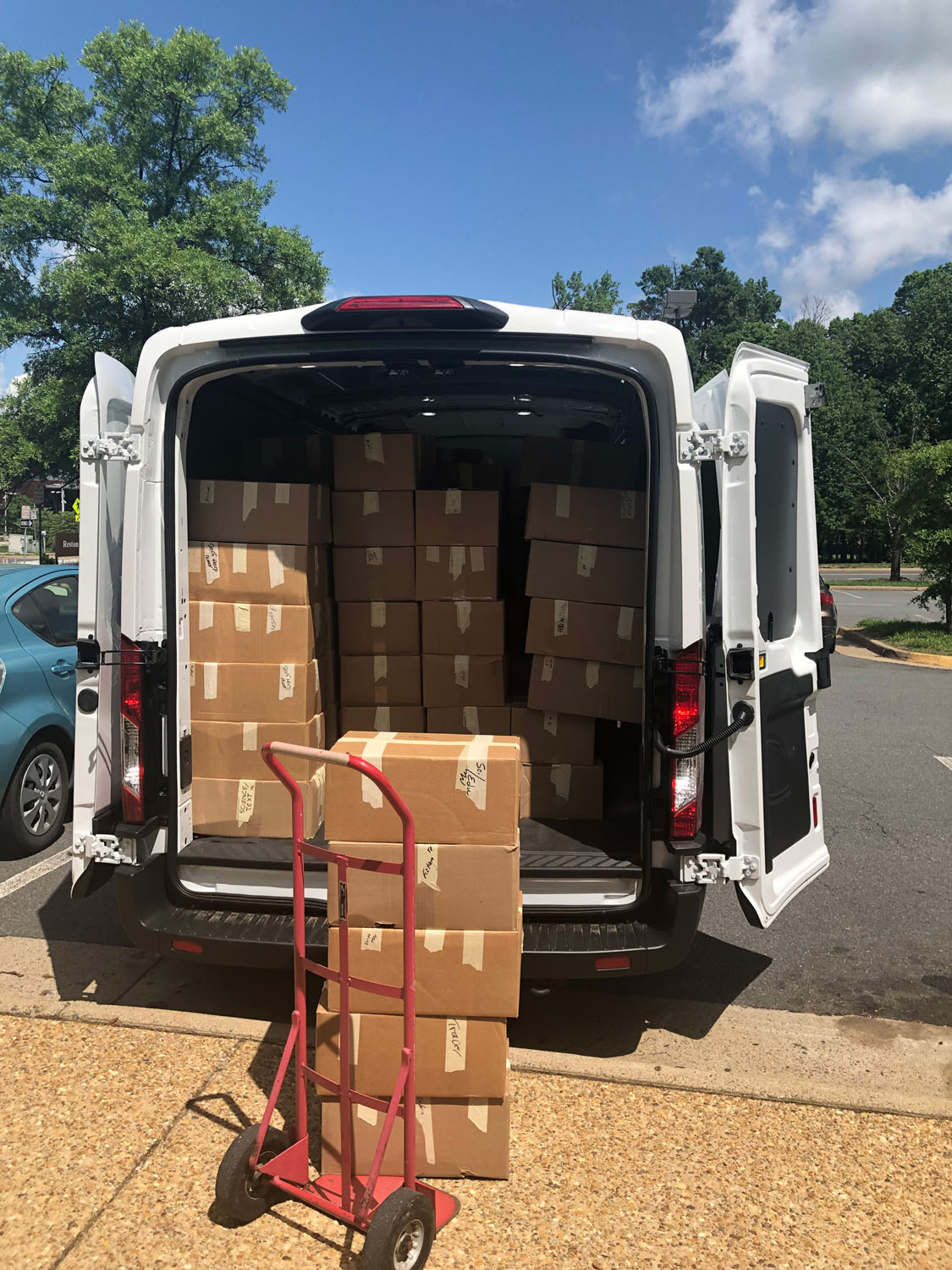 I would make small talk when I was inside.

“Did you have a good sale?”

“Maybe the best ever.” Mid 5 figures! Astounding for a three-day charity sale. Plus whatever we pay will be added to that.

We managed to clear out everything. 622 boxes. That is good because it is not cost effective to go all the way down there for less than a full load.

We headed back to Maryland. Both vehicles were groaning under their loads.

At the warehouse, we backed up to the docks.

That might mean 30,000 books. Hardcovers are usually just over a pound. Trade paper and mass markets are much less.

How many “words” did we pick up?

But the “words” weight nothing.

We estimate there are about 4.5 million books in the warehouse.

How many words do we have here?

You do the math. I don’t have that many fingers and toes.

The day Bob Garfield visited Wonder Book and Books By the Foot:

In January 2016 this email dropped in.

I hope this message finds you well. I’m a producer with On the Media at WNYC writing to see if it might be possible to schedule a time for the program’s host, Bob Garfield, to come visit the WonderBook warehouse for a radio story about the business of selling books by the foot.

Do you have some time the week of February 1st to give Bob a tour of the facility and discuss the Books By the Foot business? This would take no more than about an hour.

And sometime between now and then, I’d love to chat with you a bit about the business for a bit of background. (You can reach me at …)

I listen to various NPR stations pretty often. At first I thought this might be a NYC show and wondered why they wanted to visit us. Then I went online and checked out the show. When I heard the voice, it struck me:

“Oh, THAT Bob Garfield! The National On the Media show.”

We exchanged some prep queries and then the big day arrived.

I had planned a bit of defense as well. We’d had our share of complaints and jibes about Books By the Foot.

I just hoped Bob would not make fun of us for being so crass as to sell books by the linear foot—usually for purely decorative purposes.

He spent about 3 hours here. We walked around the whole three-acre building several times. He was hilarious. It became clear almost immediately that he “got” what we did. But I still repeated my mantra a number of times.

“This is the last chance for these books. No reader, collector, charity… wants these. If we didn’t do this, these books would all be pulped.”

Our segment of the show was condensed down to 11 minutes. I think it is very funny. WNYC did a great job with our segment and the whole book show.

Naturally there were a lot of funny outtakes that didn’t make the cut.

One memorable one was when Bob asked if we had copies of his books in our 2 million plus internet stock. Yes, indeed we had a number of them—including some autographed copies.

“Show me how you find them.”

I’ve never learned how this place is organized although I was deeply involved in its creation.

One of the office managers led us out into the vast stacks of bookcases. 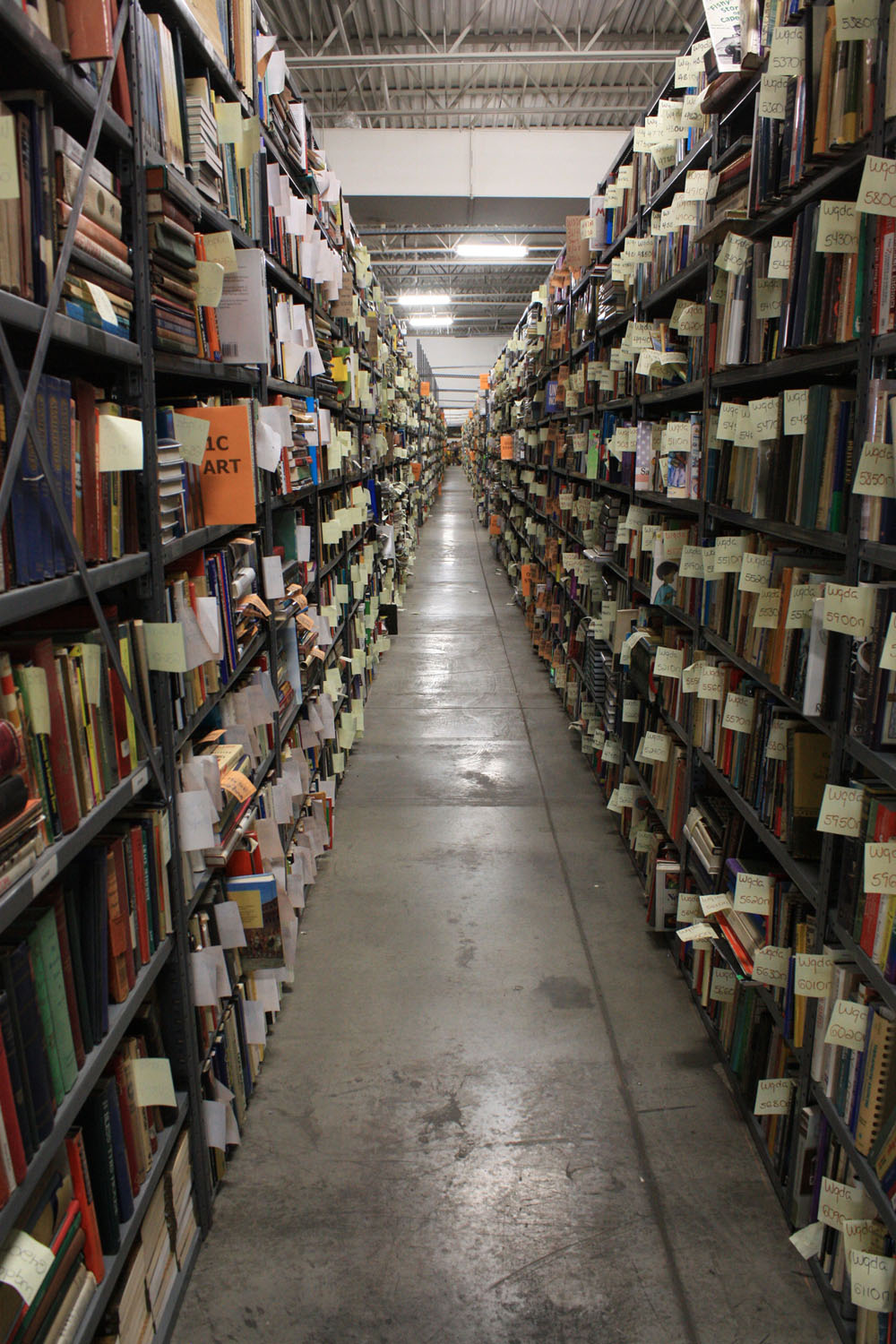 As we walked out, I told him: “Sometimes authors are unhappy when they find autographed copies of their books.”

“I once took some Elizabeth Peters books out to my friend Barbara Mertz’s house. I hadn’t looked inside them. She opened one to autograph for me, and it turned out she had already inscribed it—to a close relative. She was not amused the relative had sold her book.”

Sure enough, when we got out to his signed books and he looked inside one, he exclaimed: “He sold my book!?” And then he started laughing out loud. “Unbelievable!”

Our 11-minute segment of the show is “The Business of Books by the Foot.”

Listen to our segment or the whole hour of book stories here: 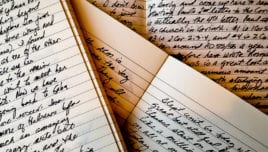 "If you don't pick them up, we're just going to dump them," the voice at the other end of the telephone growled at me... END_OF_DOCUMENT_TOKEN_TO_BE_REPLACED