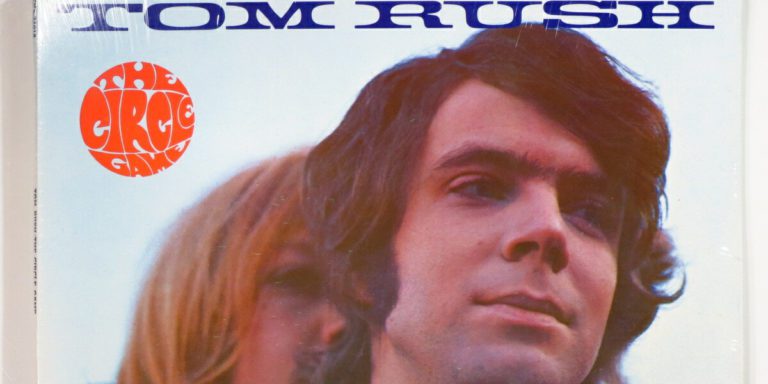 Summertime is falling down. Winter’s closing in.

September 23rd. 5 a.m. A cold hard rain is blowing out in the darkness. Autumn only began yesterday. The equinox was in the mid afternoon. But I already see the winter in my mind’s eye. Another season ended. Another year winding down.

Pippin, my little Jack Russell, is pressing all 15 pounds of himself against me. I was blessed with him and his brother Merry ten years ago. They have been great friends and companions.

Though his muzzle has whitened, Pip shows no signs of slowing down. They are a long-lived breed, and I can hope for many more years with them.

The wind is howling. Trees are rustling in the forest.

Soon the green leaves will color to red and gold, then brown, then they will fall, and the forest canopy will be bare. There are no conifers up here.

Slowing down… when I think of it my mind rebels.

To the last breath, I grapple with thee. From Hell’s heart, I stab at thee; for hate’s sake, I spit my last breath at thee.

Well, my feelings are not that intense. But I do see time as the enemy. And I dread and hate things which waste my time.

Much of this week was wasted. Needlessly.

I’ll just have to double my efforts next week to make up for it.

After spending the day sorting through thousands of books last Saturday, I visited my friend David for a beer at the Smoketown Brewery on Frederick’s Carroll Creek Promenade. He owns the brewery and treated me. He then asked if I wanted to go to the County Fair with him. He has a tent set up to sell and promote his wares. We hopped in his van and rode over. We were waved through the gates. The Fair was booming. All the colors and smells and sounds were as they have been forever. We have a couple of copies of the Fair’s history. 1747-2004. A couple of years ago, we had a collection of Fair programs from the 1800s. It looks like they’ve sold. I can’t find them on the website.

He had to leave to go back to the brewery and sort out some issue. I wandered around the fairgrounds.

There was no fair last year. COVID. I went in 2018 and 2016. Wandering among the people, I was taken back to those two evenings. Those were strange evocative nights. Strange to be alone in such a crowd. Strange people of all sorts milled about the food concessions, the animal and produce areas, the lights and noise of the carnival rides. All strangers. I didn’t see anyone I know.

I felt like a ghost—walking invisible in a world of living people.

I wandered back to the building where David’s tent was set up. I’d picked up grilled chicken with baked beans, coleslaw and cornbread. I sat at a table which was an old wooden barrel with a plank of wood atop it. I ate my meal and watched him take care of customers and chat idly with each person that walked up for a pour.

Then it was time for him to head back to the brewery. He had musicians in that evening.

I went home and turned the TV on. There was a Perry Mason episode on about rare books. “The Case of the Bogus Book.” A 1950s LA bookseller was switching rare books at libraries with look alike later printings. You can’t judge rare book by its cover. It is the points* inside that make it valuable. It was interesting to see what a bookshop looked like in the old days. His sales clerk was young and beautiful.

* “A point is any peculiarity in a book whose presence in or absence from a particular copy serves to distinguish it from other copies not so marked. It is most often used of those bibliographical peculiarities that provide the evidence (or alleged evidence) for priority of issue, binding variants, misprints, variant advertisements, cancels, textual changes, etc.”

From John Carter and Nicholas Barker’s ABC for Book Collectors. They say a lot more “editorial” things about “points” here.

(Many thanks to an ABAA colleague who sent this to me.)

The rain has intensified. There are flash flood warnings. Thousands of big drops smash and splatter against the windows. The dawn will soon lighten the blackness a bit.

The week—almost gone—was dominated by legal stuff. So needless, but once you’ve entered that world, you can’t let go. It has to play out by arcane rules and lots of words and lots of time and money.

I had to pick up a refill at the pharmacy. I got there just as it opened. The huge metal gate rose up, and the pharmacist himself called me to the counter. I gave him my name and date of birth. The prescriptions were free.

He typed me into the computer.

“Oh, it says here you need a pneumonia booster. Do you want that today?”

He sat me behind a screen and punched a hole in each arm.

It has been a year for being shot. When I get my second shingles shot, I’ll be at 6! I don’t know how many more I’ll get then.

He was so kind. Who knows? He may have saved my life.

A friend had told me he had dug up some hostas and asked if I wanted them.

I loaded them into my pickup truck and told him, “Thanks… I think.”

Will I be able to find spots for hundreds of hostas?

Sure. It is a big mountain.

People wonder why the deer don’t eat them. There is a plague of deer in Maryland. I see a few or a dozen or a score every morning when I bump down the mountain. Maybe it is the presence of Merry and Pippin. They spend most of their time outside in their covered pen. There’s a little doghouse for each. Will the deer embolden approach and feast on them when we are gone?

Well, I enjoy them in the present.

It is a gray dawn. Silver sheets of rain are like a translucent screen with giant trees swaying and whirling, hoping that their trunks and roots will keep them fastened to the earth.

I babysat Giles this week. I’ll need to have Merry and Pippin babysat next week.

I took him home to Pennsylvania last night. I wandered through the house where I’d lived for 20 years. I saw the William Blake print I’d bought at auction in the 90s. It is as stunning as the one I got last week. 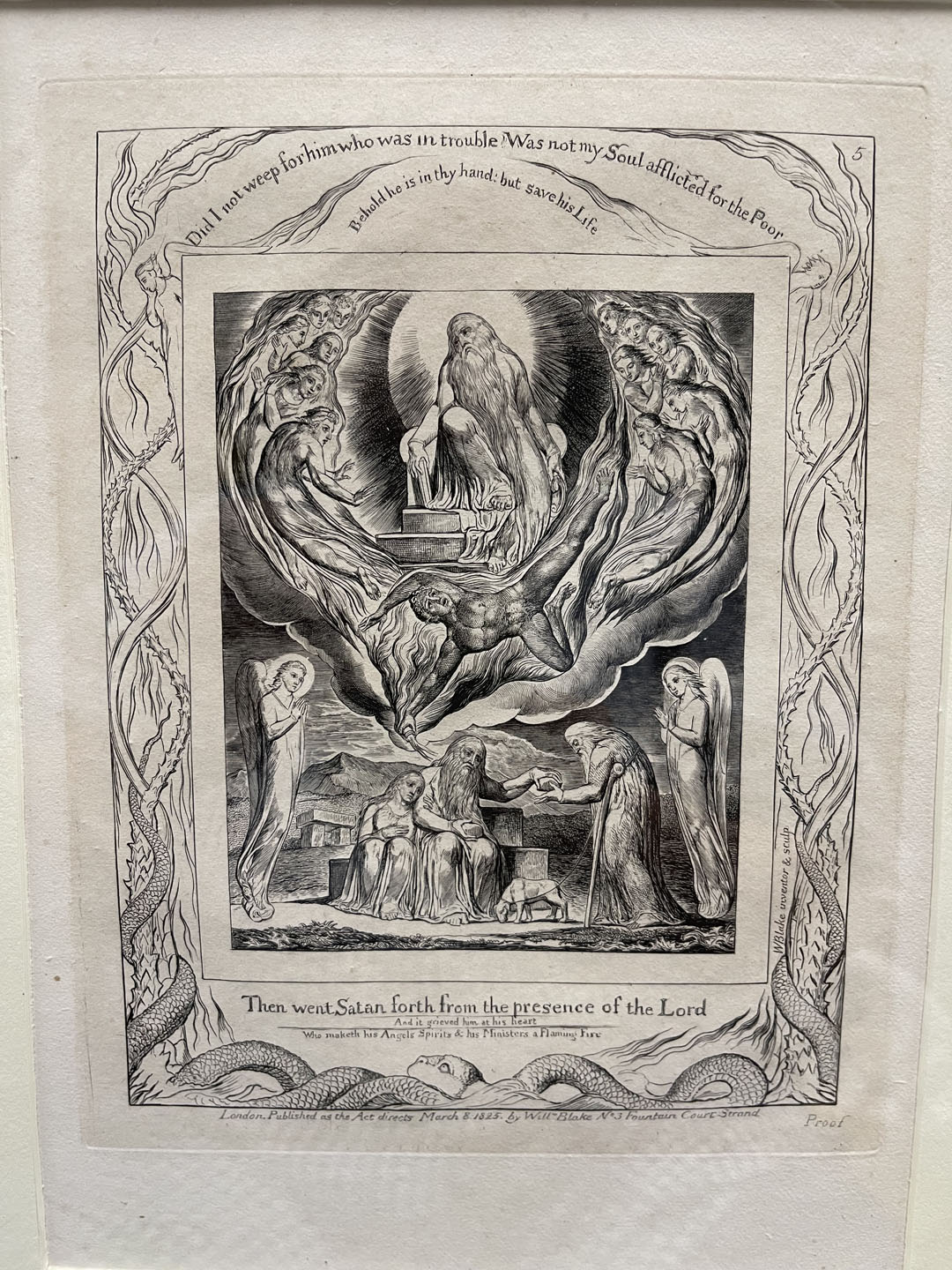 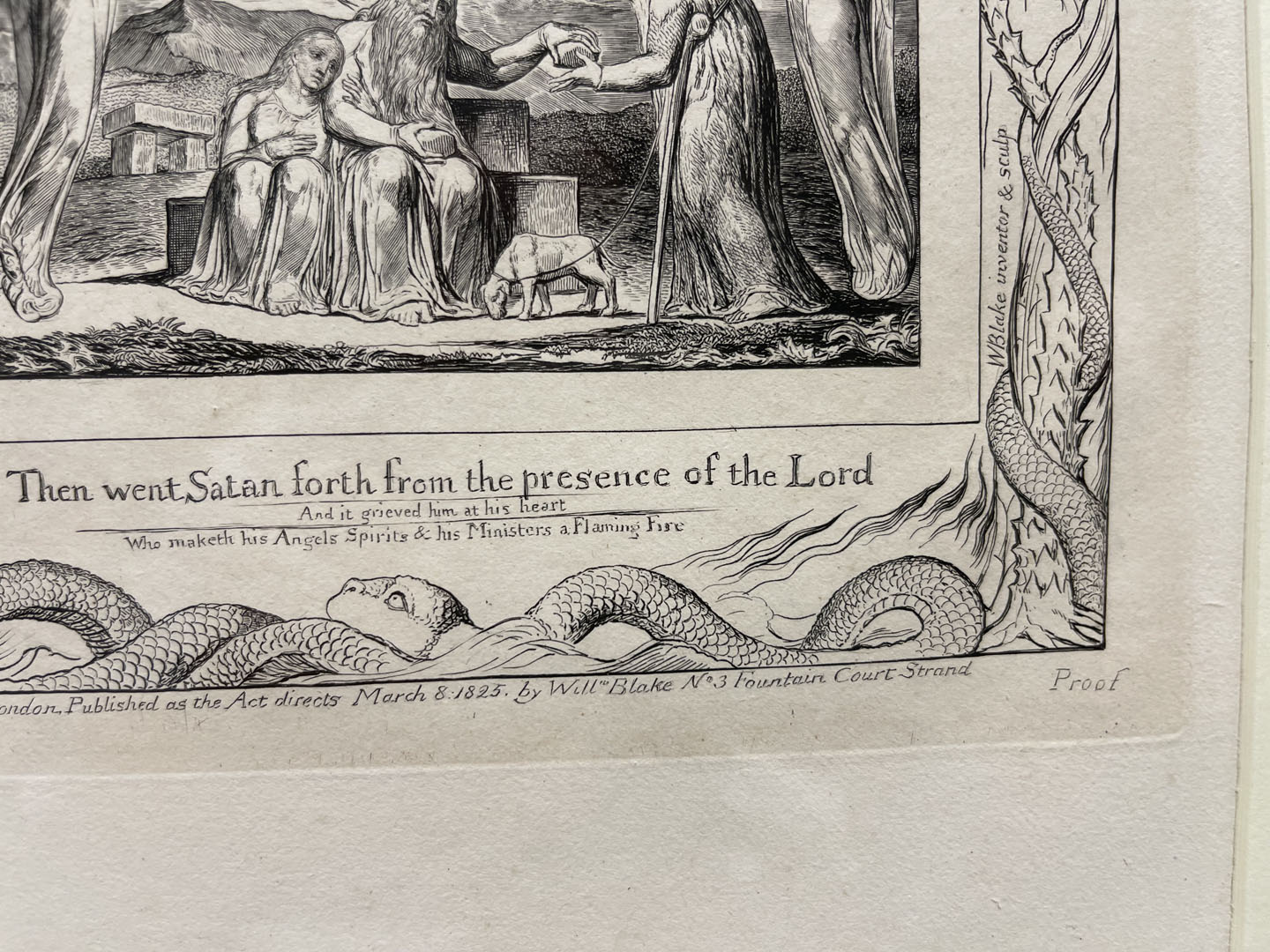 I took it down from the wall. I’ll get it archivally matted and reframed.

It is amazing to hold such things in your hands. Even more amazing to own them… for a while.

I was so wrapped up in meetings and paperwork this week I didn’t get to many books this week.

But those that jumped out at me as I walked past the carts they rested on were stunning surprises.

The Limited Editions Club version with illustrations by Thomas Hart Benton and signed by him. 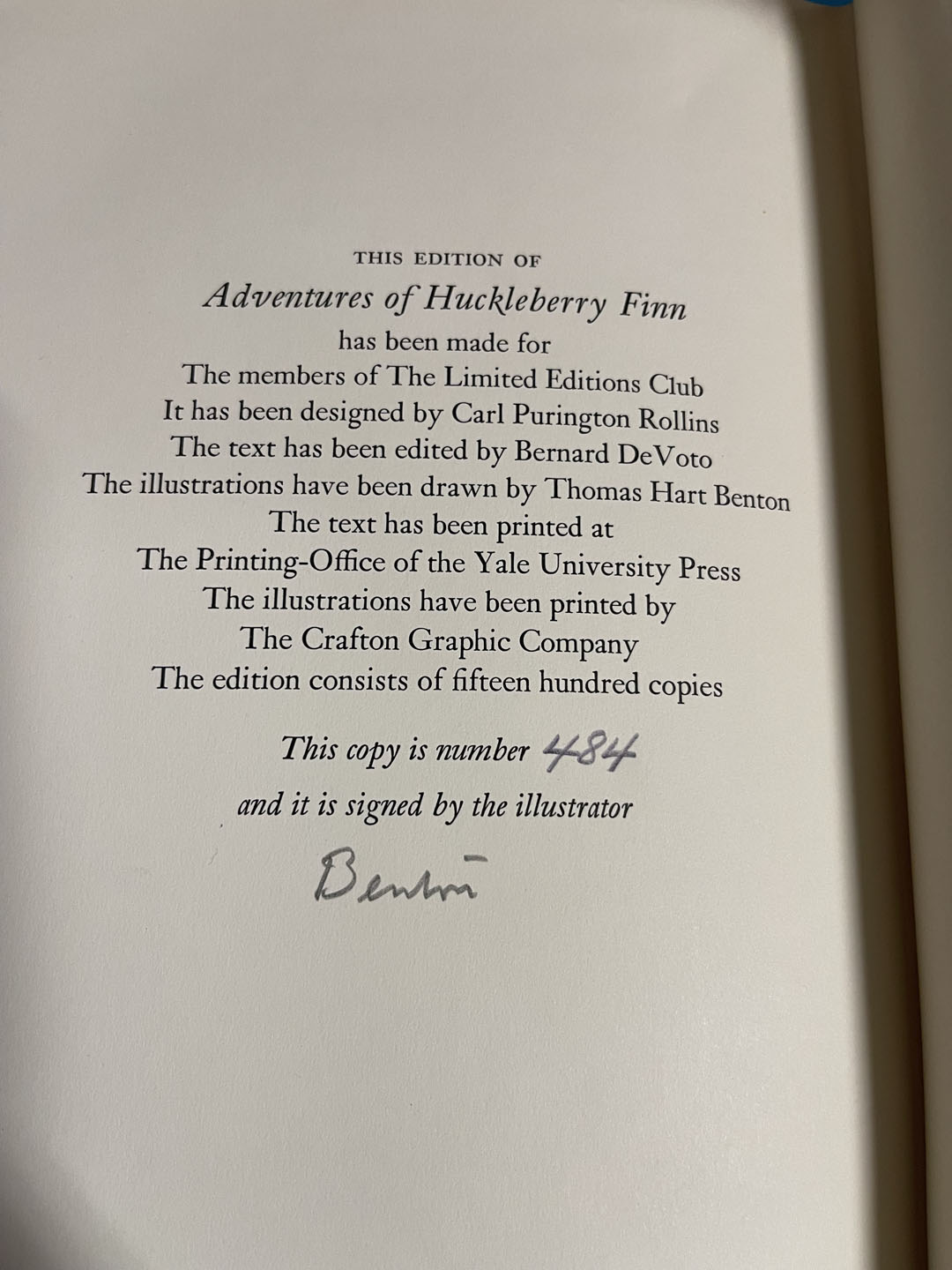 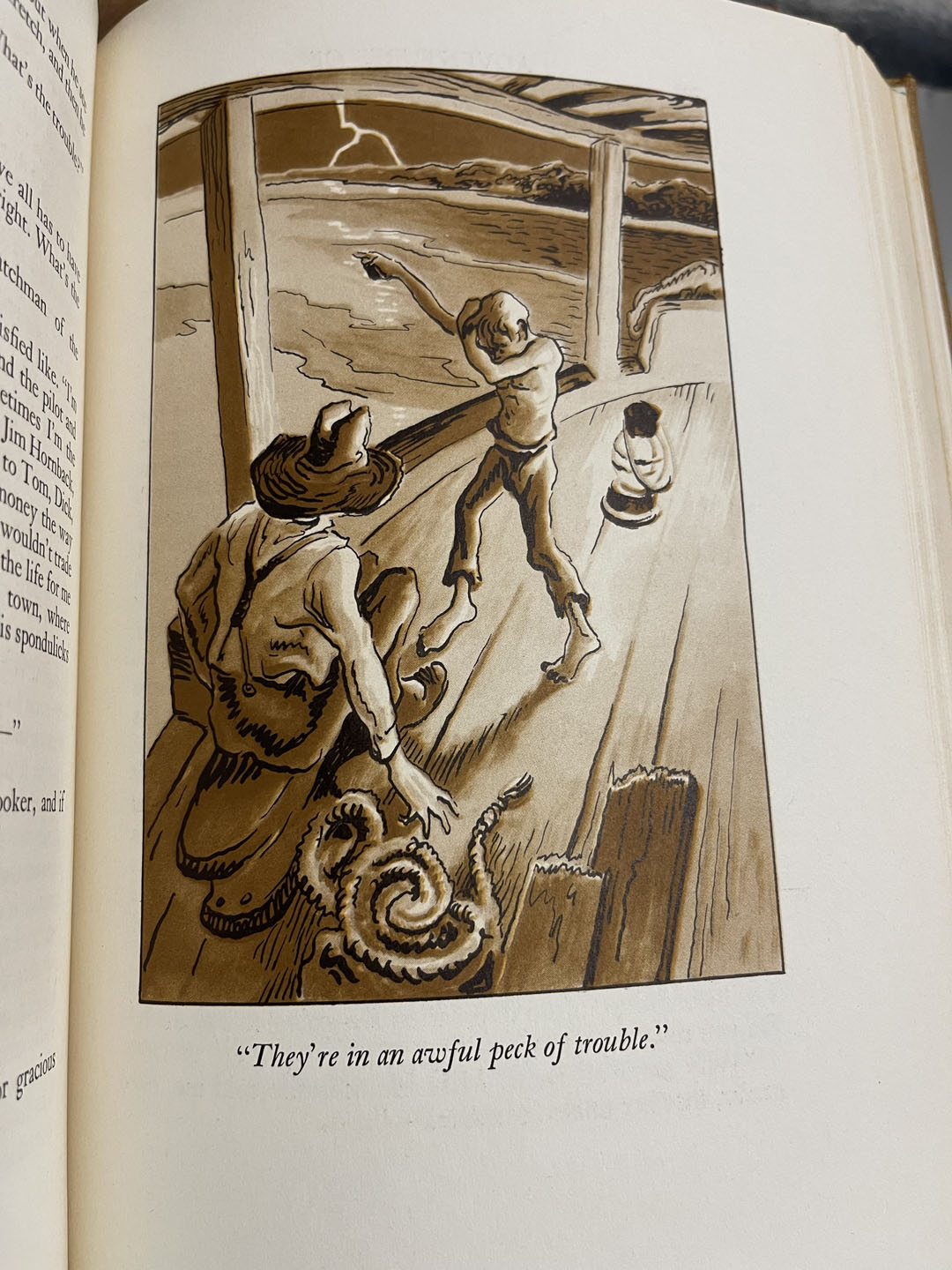 It has a letter from the publisher laid in and is signed, “To Barbara XXOO…”

I wonder who Barbara was?

Larry thought this set of books was good. 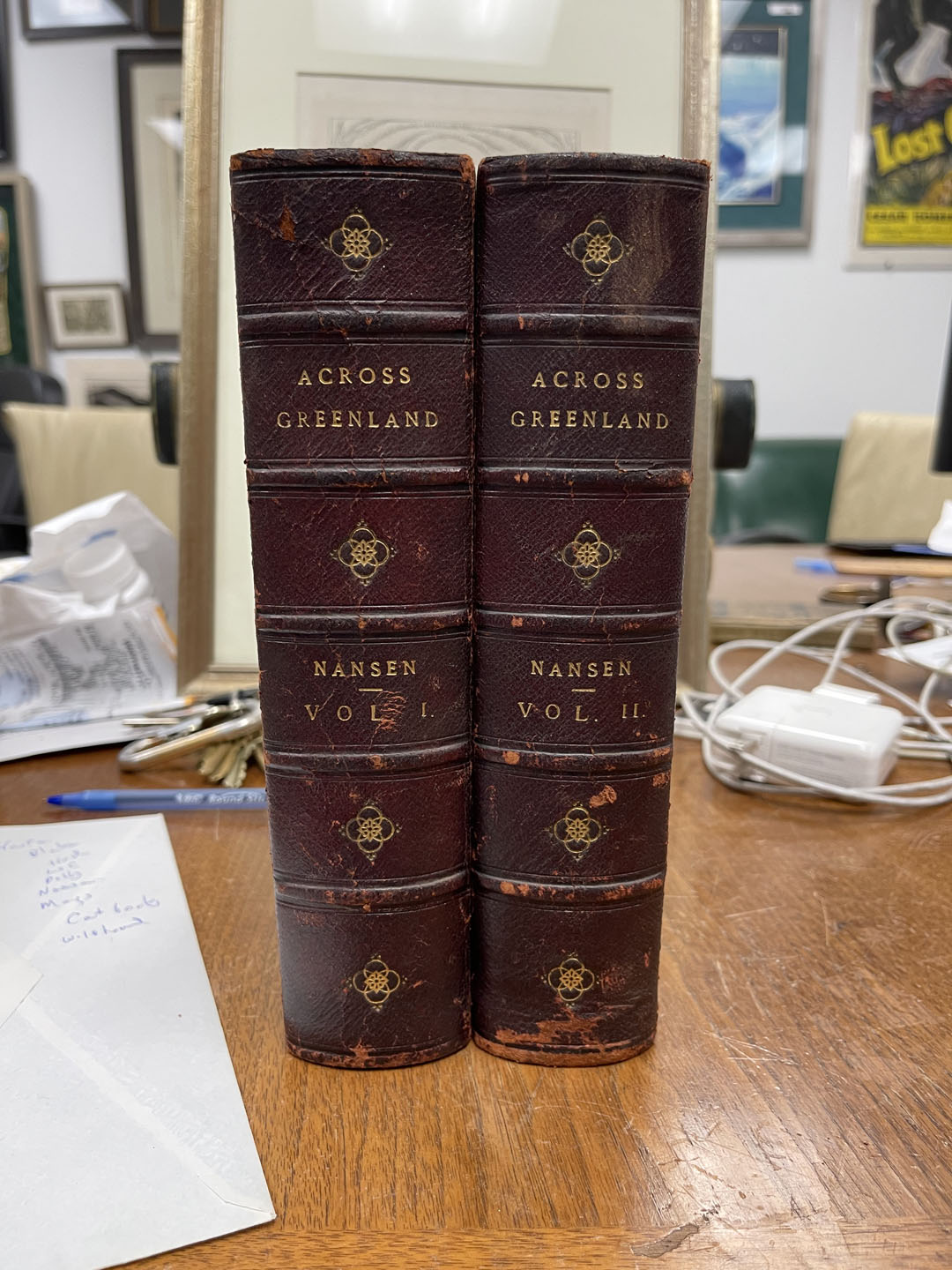 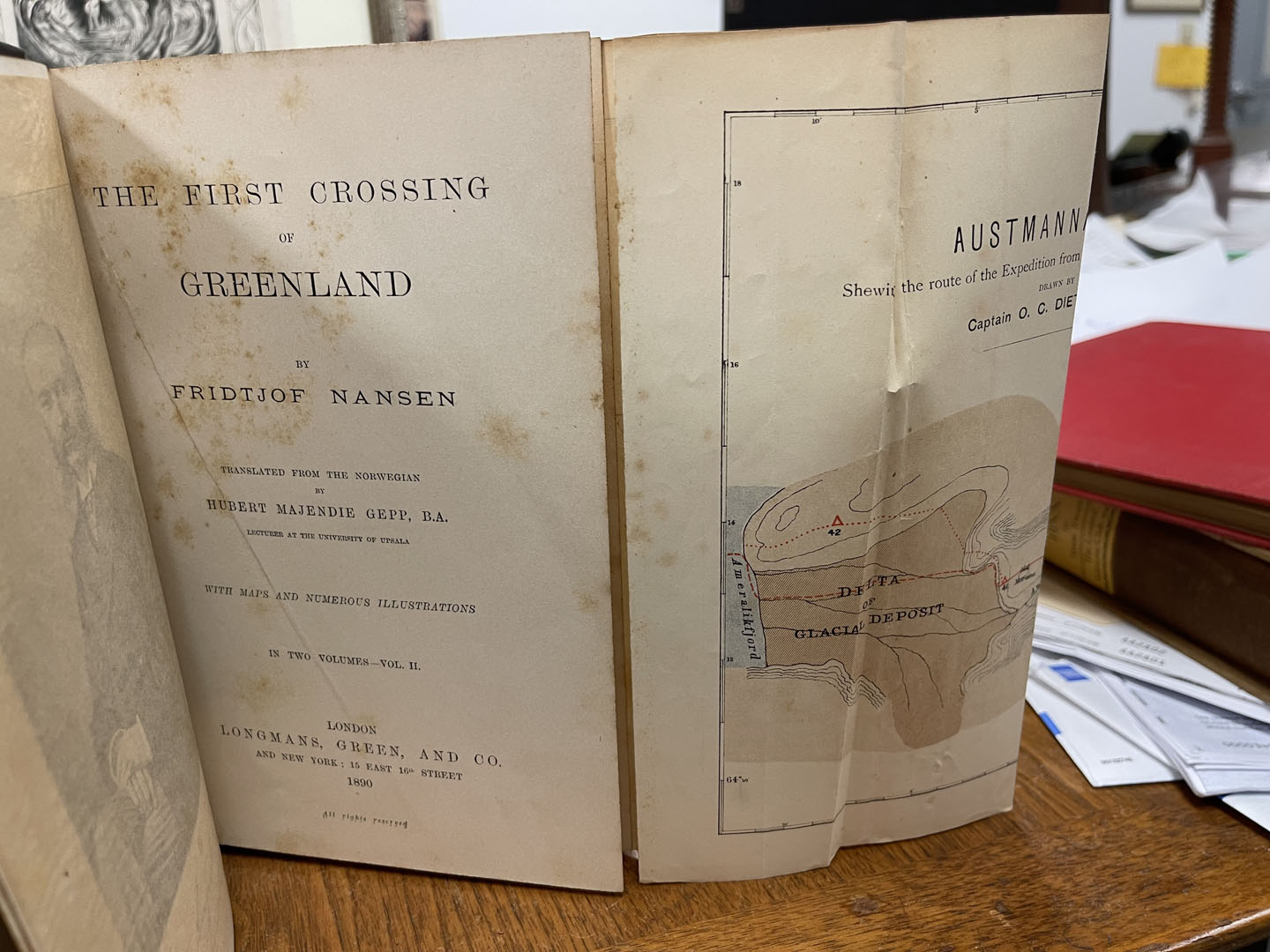 Nansen’s The First Crossing of Greenland.

“It IS good,” I told him and added a few hundred to his check.

There are others too, but I don’t want to bore you with pretty books. 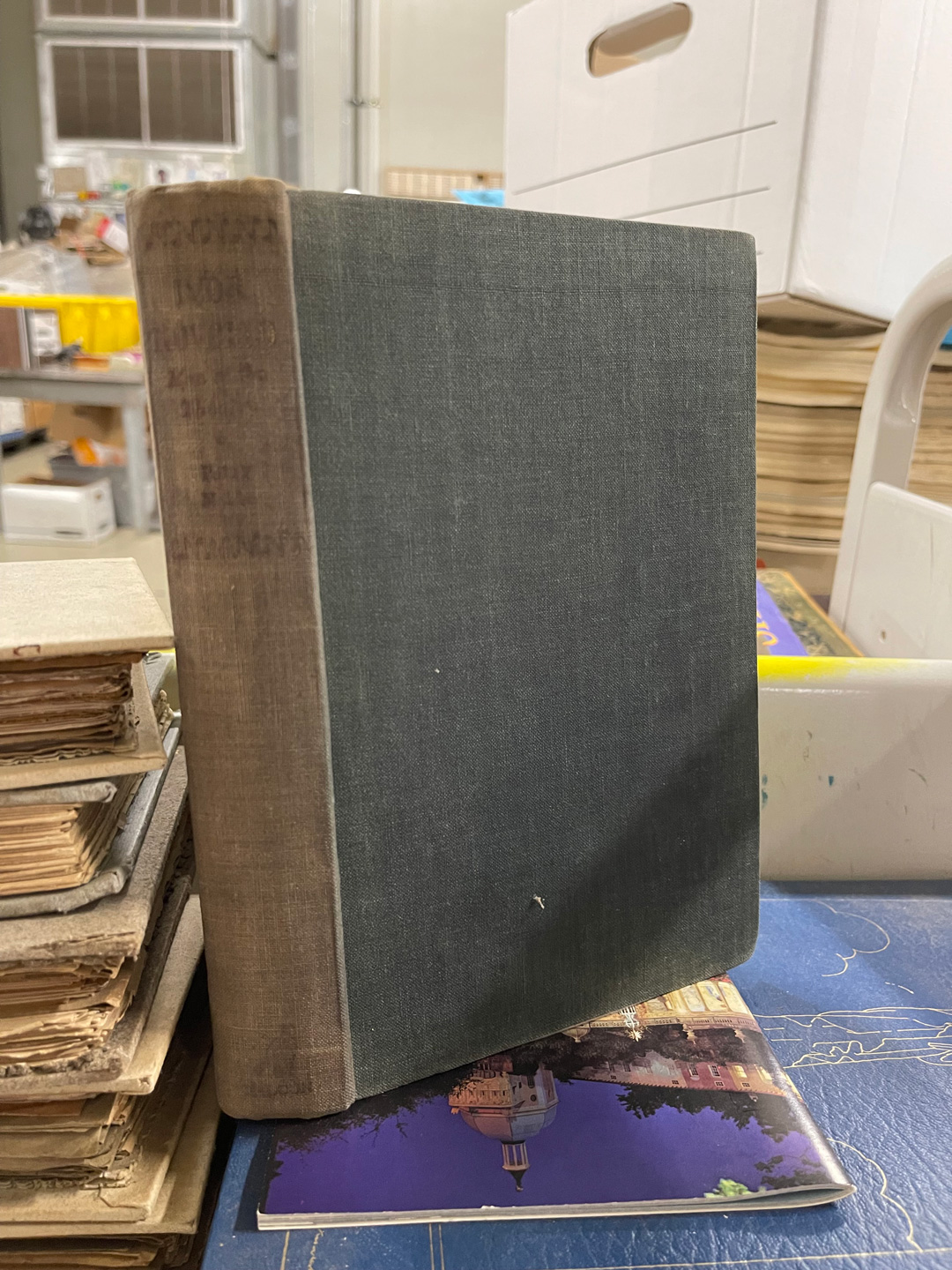 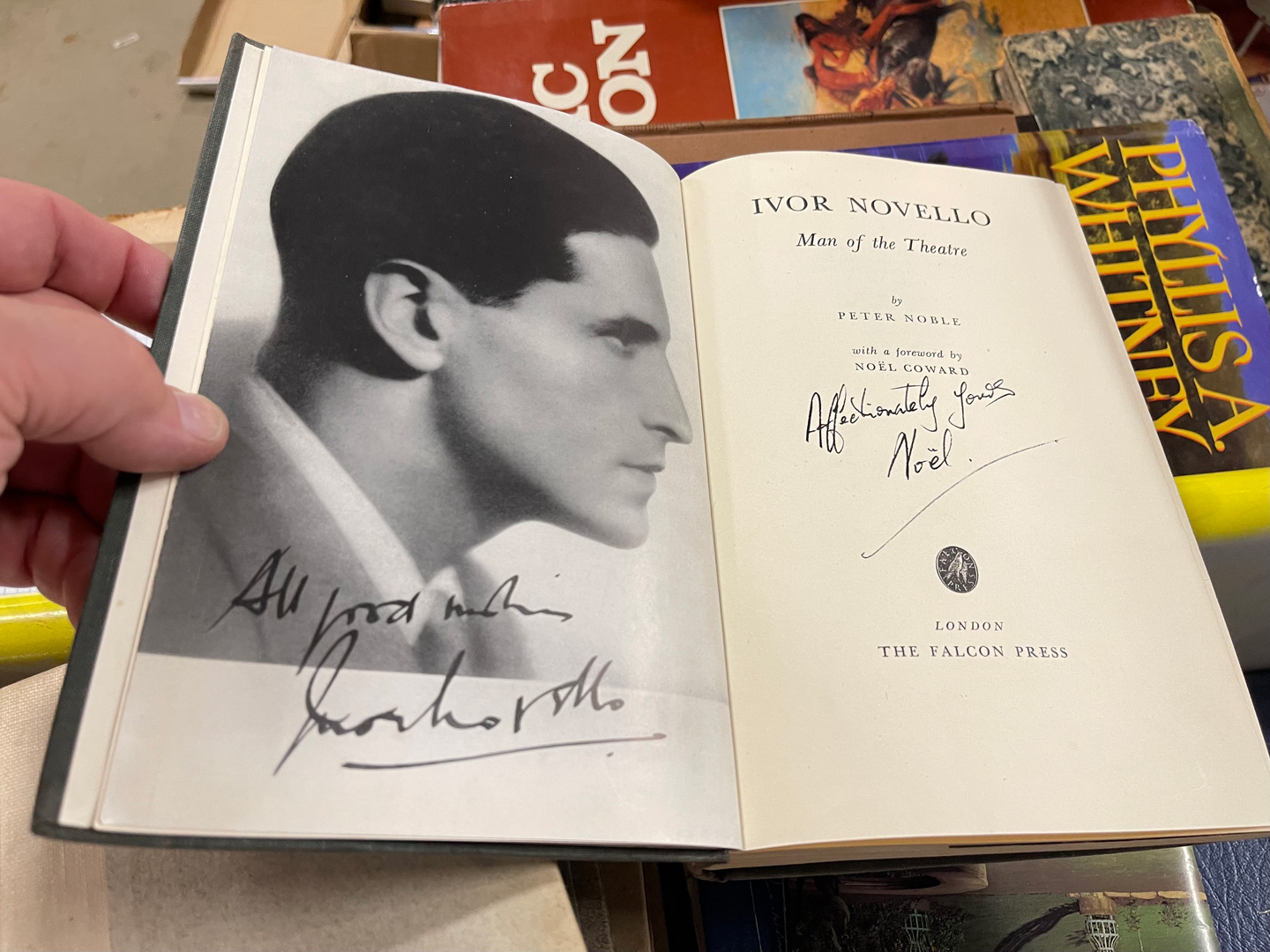 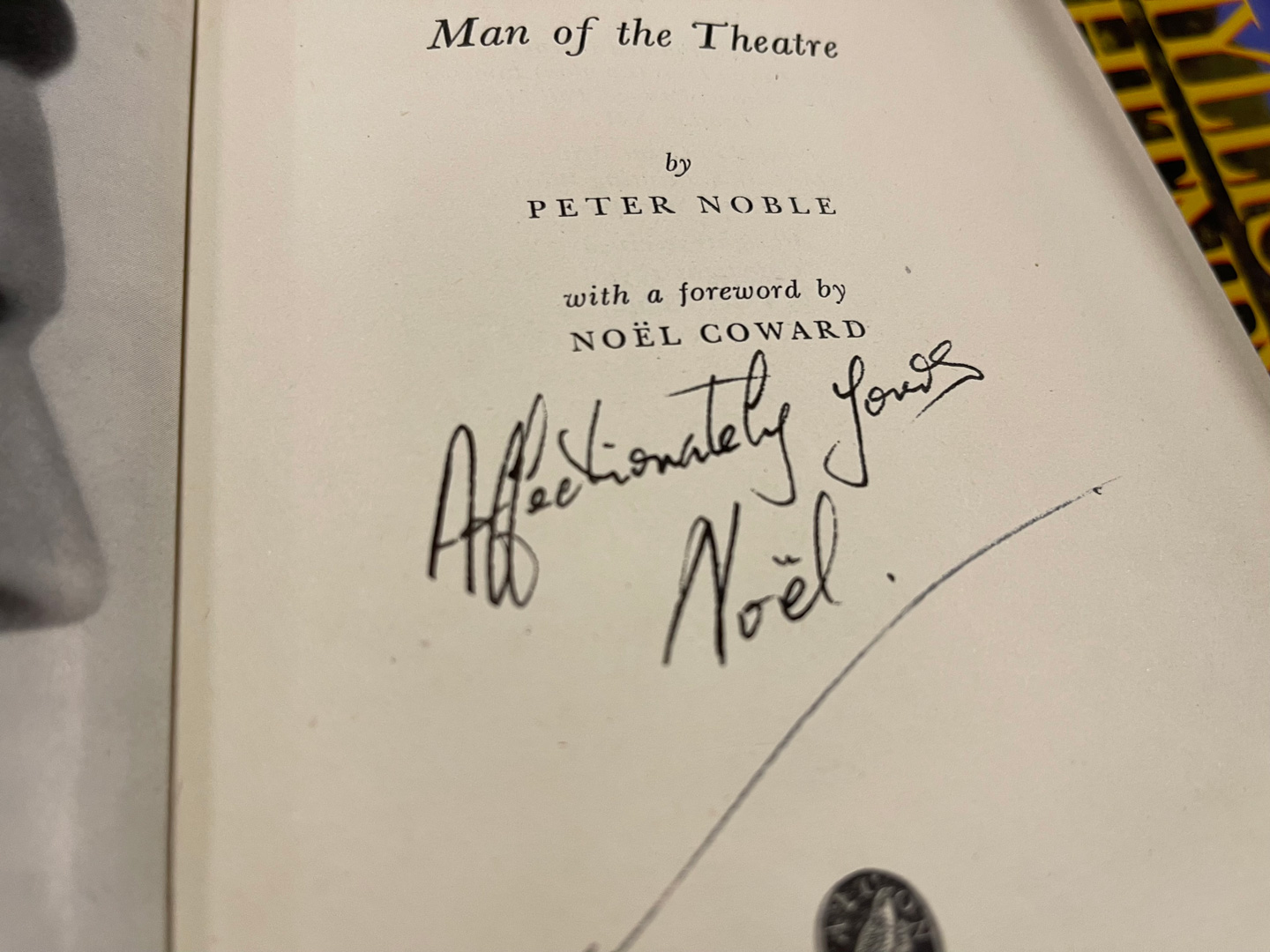 I love opening a dull tome to have a surprise leap out.

I was passing some boxes piled high on a pallet waiting to be sorted. Magazines are tough to resell, but a customer left us a note on this urging us to give them a shot.

I smiled at the sentiment. I’ll be sure to give these a go.

I saw Tom Rush perform “Urge for Going” at the Birchmere. It was 2019. Pre-COVID. He would have been about 78 years old then. Why would he stop if people still wanted to see him?

A friend invited me to his elderly cousin’s home for a concert. He had acquired and installed vast theatrical pipe organ decades ago. Now he is having it taken apart and sent to someone out west where it will be installed in someone else’s home.

It is no Taj Mahal, but it was built for love. As long as it lasts, I’ll think of it as a memorial to the love of books and writing—my love and the love and care of the many people that have helped build it.

In the coming weeks…

I’ll ply the fire with kindling. I’ll pull the blankets to my chin. I’ll lock the vagrant winter out. And I’ll bolt my wandering in. I’d like to call back summertime and have her stay another month or so… But she’s got the urge for going. So I guess she’ll have to. 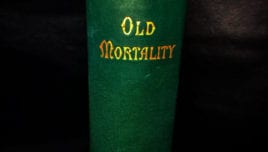 I didn't sleep well last night. I'm not sure when I was awake or asleep. Is that Lucid Dreaming?... END_OF_DOCUMENT_TOKEN_TO_BE_REPLACED