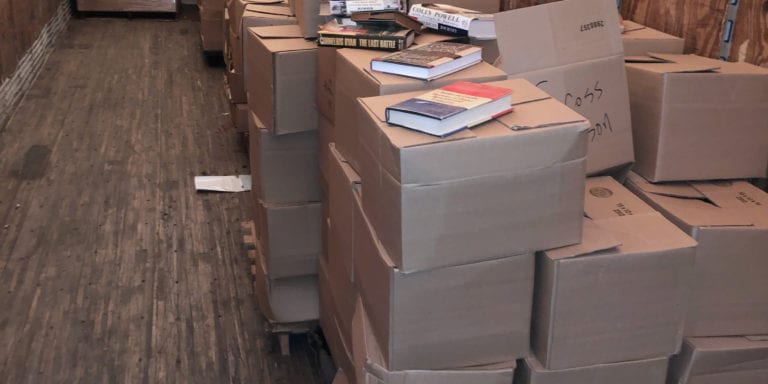 The Hottest Book Around—At One Time

There are a dozen old trailers backed up to loading docks here at the Wonder Book and Books By the Foot warehouse in Frederick Maryland. We bought them as salvage and use them for storage. We’ve filled up the 130,000 square foot warehouse. If we didn’t have those trailers—well, the books in them would have no place to go.That is never good.Each trailer is like a little annex, an appendage sticking out from the building. To access them, we just push a button, and the dock door goes up.There are 21 loading docks at the former US Post Office Distribution Center which became our warehouse in 2014. We certainly don’t need that many!

Dock 1 and Dock 2 are “low docks.” These are at the level for unloading from vans and other vehicles that back up here to drop off (or take away) books.Dock 3 is an “elevator” dock. It has a platform which can rise and descend from ground level. If we want to take the forklift or other equipment out to the dockyard that is the only way to get big stuff from the building to the ground.Dock 4 and Dock 21 have corrugated paper crushers and large metal containers attached to them. We can quickly crush the thousands of boxes we get in every week if they can’t be repurposed for our own use. The crusher pushes the cardboard into the containers. When the containers are full, we summon a recycler who brings an empty container and takes away the full one.Dock 5 is where a different recycler’s trailer is parked. Into it we roll pallets of scrap paper and plastic as well as sorted books. The recycler pulps the paper, sells off the plastic and resells the books (I think in bulk overseas.) When we fill the trailer, we summon that recycler. They bring an empty trailer down and take the full one away.Docks 6, 7, 11, 17 and 20 are HIGH docks. These are about 5 feet from ground level. We use these for deliveries and shipments of books in big trucks or tractor-trailers.The other 10 high docks have trailers backed up to them. We bought these salvaged trailers from brokers. The brokers guaranteed they are dry and safe. They are just too worn for continued road use.21 loading docks…crazy… never in my wildest dreams…well, maybe THE wildest dreams…The books we store in the trailers are not easily accessible, but we keep a list of what is in them taped to each loading dock door.Sometimes we stick collections that are low priority in them. These collections may not be worth sorting through until we get a little desperate for books. This week I decided the hoarder’s collection that we had picked up last summer should be pulled from the trailer and triaged. I knew a lot of the books were very common and, therefore, not viable for internet sales. Many of the books had some condition problems or flaws that could be caught by an experienced sorter and not be sent to Data Entry only to be rejected and sent back.(We also put some collections that need “airing” out to the trailers. The collection we bought a month or so ago that was lightly scented with mothballs is also in a trailer until all the odor dissipates.)So, I asked Clif to pull out all the pallets labeled “Manchester” out of the trailer at Dock 15 and take them up to sorting. That created about 30 empty spots for us to fill with pallets. I wandered past the open dock door later. He had pulled out the hoard. I decided to wander in.

The pallets of books that were left in there are also labeled. The pallets have a sheet of paper taped to them which read “Chevy Chase Musty.” Chevy Chase usually means good books. There is a lot of money and many old estates in Chevy Chase and Bethesda Maryland. This collection came out of a damp basement. They were “resting” in the trailers until their odor dissipated.I glanced over as I walked past, and atop the boxes were some loose books. Among the loose books I saw a title that took me back almost exactly 20 years.

Most auctions were set in uninspiring locations. Most auctioneers preferred to remove an estate’s contents to their own facilities. Professional auction venues are Spartan affairs. Sometimes, if the estate was large enough and nice enough, they would hold the sale on the home site. This saved the labor of hauling, and if the home was in a particularly prestigious neighborhood, that pedigree could help to significantly raise the prices realized.It was early summer. Kind of late for the auction season. The house was a big wooden Victorian Lady with sweeping verandahs and loads of carved, routed and turned architectural details. It was located in the small, fashionable hamlet Braddock Heights overlooking two valleys. The sale was held in the backyard. 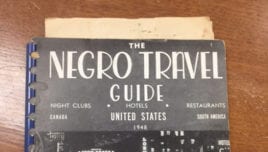 It was as much a horror story as a house call. It was about 2008. A widow had called... END_OF_DOCUMENT_TOKEN_TO_BE_REPLACED