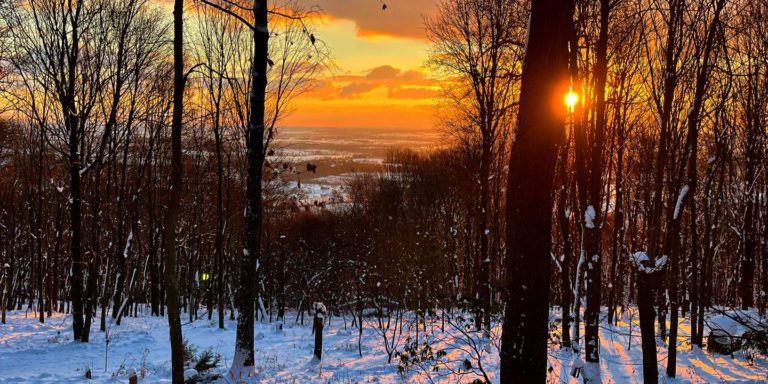 Too Many Moving Pieces

It is Friday morning.

The blanket of snow that fell overnight gives off a light gray glow.

When I rise, I know I will have to go out and plow.

I heard the wind howling in the night between waking dreams.

At 6 when I woke, I just laid in the dark. I wanted to return to the tumultuous dreams that had given me such a ride while I slept.

In one, a man came running down the mountain toward my home. (There are no dwellings west of here for 10 miles.) He was carrying two large guitar cases. When he got to the flat landing of my drive, he found a 4-wheel flat metal cart. (I don’t have one here, but we have several at the warehouse.) He got on it and started rolling down the steep paved drive. ‘You’ll kill yourself,’ I thought. He disappeared around a bend, and I heard a crash.

In another, two British fellows were squeezed in next to me in a car I was driving. They had big bulky long coats or blankets. I was pushed into the door, and then my feet couldn’t find the pedals. I cried out my distress. We were heading into a construction zone. My foot found the brake just in time. We came to a stop right before a large yellow bulldozer. One of them handed me a little gold coin held by its edges between his forefinger and thumb. I took it and put it in the cupholder in the door. It was filled with gold coins.

There were other dreams—sadly gone now.

Dawn is lighting the world outside. There are 4-6 inches of snow, I think. Birds are landing on the porch roof below my bedroom window. Nuthatches, chickadees, titmice… Where do they sleep in a blowing snowstorm?

I’m sore from all the work yesterday. I did some heavy culling for Books by the Foot orders. Travel, cooking, architecture and design.

I met with my son, and we brainstormed the unification of foreign language books with the countries where those languages are spoken. We experimented with it early in COVID at the Gaithersburg store, and it has seemed to help. It is hard to get people to go to the foreign language sections. This kind of forces them to. Indeed, when I was on my knees pulling coffee-table travel books in the Germany section, 20% or more of the books about cities and regions were in German.

Plus, it is good to shake things up.

I get frustrated at all the junk books I find when I’m doing this. But then I need to force myself to remember that the good books have sold and these are the dregs.

I also find so many mis-shelved books. I make stacks and review them with whoever is on duty.

“King Arthur and Robin Hood will sell much better in legends and folklore than in British history. Plus, English history is always overcrowded, so anything that can go elsewhere helps.”

“Goethe in Russia in Russia?”

What could I possibly complain about?

Well, there is the future. How do we sustain growth?

I need to brainstorm ways to get some more percentage points. It’s part of the “game.” It is also my job.

At the warehouse, we have a new problem. Just a month ago, I was worrying that we couldn’t squeeze another book in the building. Now big spaces are opening up throughout the building. The buying has dropped off at the stores severely. Omicron? The holidays? Or are all the books… GONE?!

After the workout at the store, I went to the accountant where my old friend Peggy notarized the 5-year lease extension for the Hagerstown store. I’ve been going to that converted residential house since 1982, I think.

Then back to the warehouse where we are processing the 35 pallets of remainders that arrived last week. That’s physically hard work as well. At least I do not have to do that.

Then carts for me.

We picked up one of the vans from a nearby repair place. The bill for two oil changes and one set of wiper blades was $320!! COVID… Before COVID, they were about $60.

When I got home, it was dark. I brought over some cartloads of firewood from the “Barn.” Then for some inexplicable reason, I decided to wander into the black forest to drag in deadfalls.** That was certainly rugged exercise. I used a flashlight to locate them. Then I would grasp the ends of however many I could handle and trudge along the uneven forest floor toward the pool of light surrounding the house. Why? Seemed like an interesting thing to do at the time.

(I wrote more about this at the bottom.**)

It is light enough now.

Time to bundle up and go out and plow. Serendipitously, the ATV was dropped off from repair Wednesday night. They’d had the plow, which I carelessly busted in October. The ATV stopped starting in early November. Perfect timing. (If it works.)

It is very gratifying when bits of history land here and we are able to “rescue” them.

These two volumes of history of the Nuremberg Trials came loaded.

The most important bit was a long note from Supreme Court Justice Robert Jackson.

Harry Truman appointed Justice Jackson to be the chief prosecutor of the Nazi hierarchy.

The books likely belonged to Nicholas Doman who was a US Prosecutor at the trials. He was the first to interview Rudolf Hess, a top Nazi, who had flown to England for obscure reasons that are one of the big mysteries of WW2. Some theories are that he was a bit deranged from syphilis. He was captured and spent 4 years as a prisoner in England.

The most striking artifact is the 8×10 photo centering on Hermann Goering. Goering was convicted and sentenced to be hanged. He thought that dishonorable and asked to be shot. That was refused. Somehow, cyanide capsules were smuggled in to him, and he committed suicide.

The face of a man responsible for killing millions is haunting. I will see this photo in my dreams.

Among the books I picked up from my colleague Brian Cassidy last week were thousands of books of obscure poetry and poetry ‘zines.

Certainly more a burden than a blessing.

Still, I went through each—just in case.

They certainly wouldn’t do well online. We’d lose thousands of dollars listing them.

Still, they were poets’ work. Some were done in letterpress. Many were signed.

I came up with a nuclear option.

I insisted the managers make tubs full of them and display them prominently at the very front—where we stock the hot new arrivals are staged. It is the active section in the stores.

From there, they are on their own.

If you’re a poetry fan, go to any of the stores and root through. Maybe you will find things I missed. I hope so.

I did my due diligence. 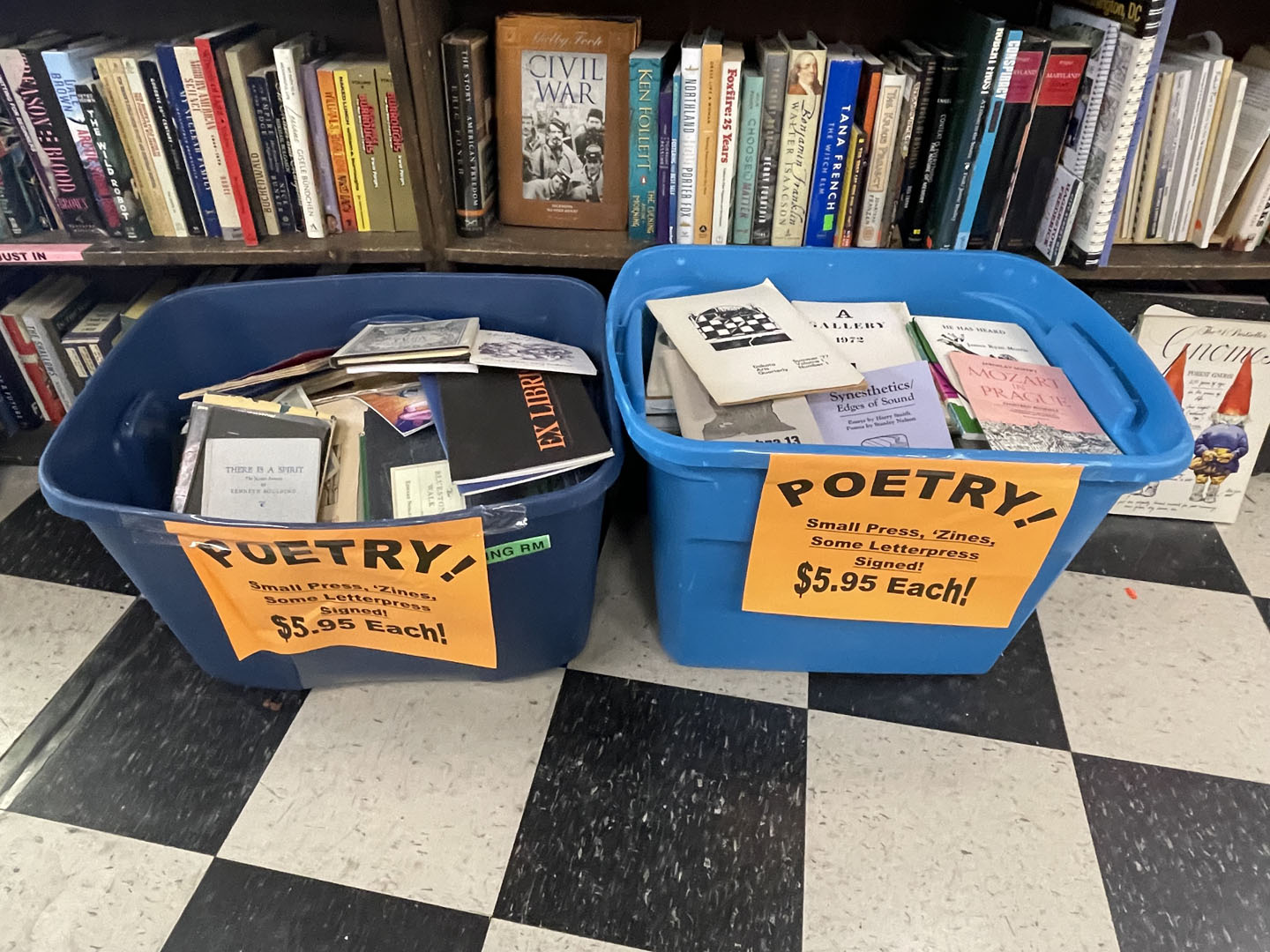 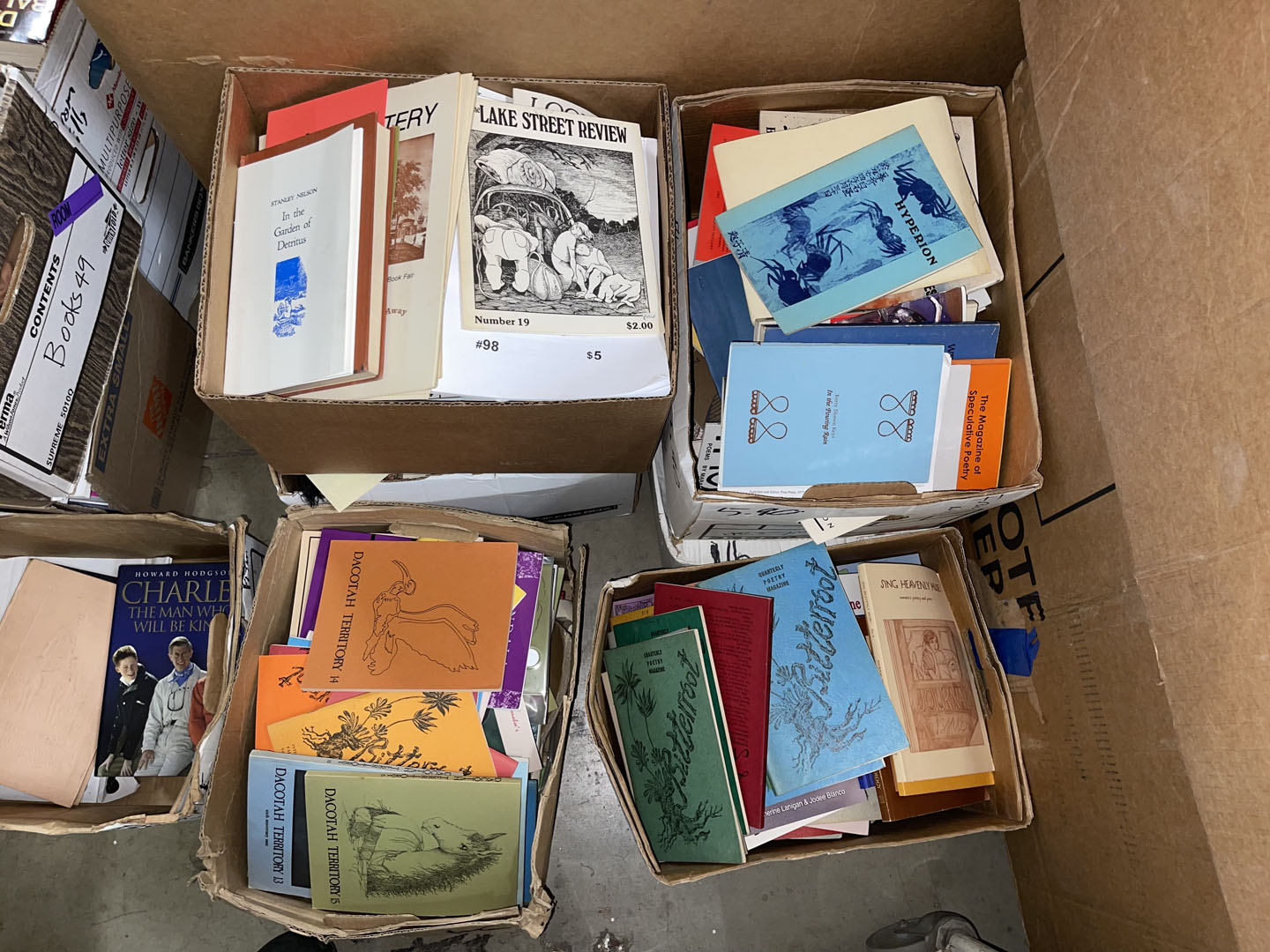 Most books have hundreds of moving parts.

My old mentor used to joke to new employees when his little bookshop’s shelves were filled, “Go back in the storeroom and get the shelf-stretcher.”

He would also quip to newbies,” Count the books before you close up tonight.”

He was such a kind generous soul with people—employees, strangers, customers… But in his business dealings, he was very impecunious.

Moving parts… Wonder Book has evolved to the point where so much runs on inertia. Things take care of themselves. If someone is out, there is someone to step into their place.

But sometimes things unravel. Here. Then there. There. And there.

“We are out of empty carts!”

Still, I’m the one to rush out and search the three-acre building to find where they are hiding and figure out how to get them empty. So, that day I became a cart emptier.

I mentioned in the last story we had a lot of people out with “COVID Contact” in recent weeks. This hit the Books by the Foot department hardest. There was no one here left who knew what to do with certain aspects. Over the weekend, there were over 70 email messages on the BBTF computer. Though we had put a robotic reply that we couldn’t respond right away and we were blessed that this happened over a holiday weekend—which provided a great excuse—I still thought we should give people the courtesy of a reply. I volunteered to do it.

Most were inquiries like “Where’s my order?” Or “How much would 17 linear feet of pink-spined books cost?” (Do we even have that many?) I quickly became aware I was an unqualified Customer Service Rep. My answer for most of them would be, “I don’t know. Can you wait…” (We didn’t know when people would return.)

But you can’t say things that bluntly. I did a couple dozen and then begged off.

Fortunately, a couple Books by the Foot’s people’s “parameters” were met quickly, and they returned.

Still, it is frightening to see how vulnerable something that seemed so layered and stable could be.

This is a very short blog.

I got my Visa to Egypt. They wanted to know the dates of my last visit. I was there in 2006 or 2007 with my old friend Barbara Mertz (PhD in Egyptology. AKA Elizabeth Peters/Barbara Michaels.)

How could I find those dates? Where is that expired passport?

I searched old emails trying keywords and, sure enough, I was there January 25-February 3, 2006!

Now the only hurdle will be a negative COVID test. If I pass that, I’ll be off before too long… Inshallah…

Here’s a link to bonus blog. It was originally published in 2017—it is a very early one. It was updated last year just in case we couldn’t publish for some reason.

Some books sing to me
Some just sit on the shelf and stare
But every book deserves a look
and I give every one I’m entrusted with
the best attention I am able
If I can save its soul
perhaps some of mine gains merit.

Ah, but those that sing
There combines love and duty
And they become mine
Loyal and true
And I give them adoration and shelter
We will remain together forever
Well, forever for me is finite
They are immortal
Barring misadventure they will abide
Books, they abide

Dragging the Deadfalls In 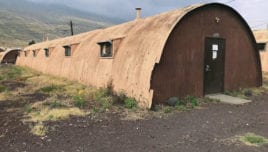 It was so very long ago. The images in my memories though mostly clear have borders that are a little out of focus... END_OF_DOCUMENT_TOKEN_TO_BE_REPLACED