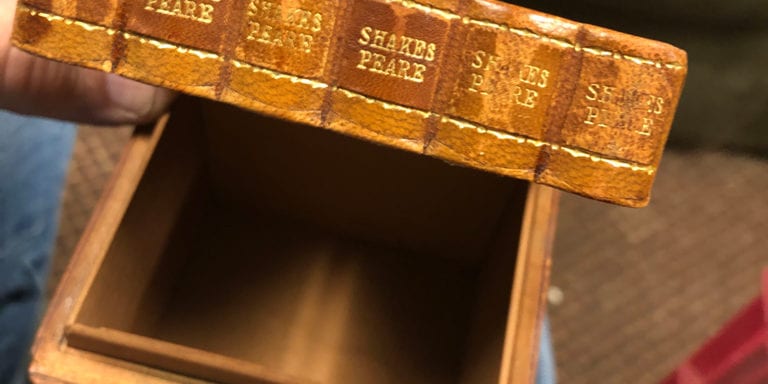 This week’s story must needs be a bit rushed. My editor is away Friday. I can’t wait til the last minute like I usually do. Plus, this week and last have been very disjointed with my travels and my son’s wedding. But then things in my life are frequently disjointed. Actually, sometimes I feel my whole life has been one disjointment after another.

This Friday will be the last day of summer. I’m going to NYC for the Art Book show. I’ve never been to this one before. It may be a little too cutting edge for me. We shall see. It’s been so long since I was in the City. Was it June? Or May? I plan to stop at the 21 Club—Jack and Charlie’s once-upon-a-time speakeasy. Maybe I’ll be able to channel Hemingway. Decades ago, a descendant, when he needed the money, would bring a Steinbeck signed to Jack or Charlie (I forget which.) He brought 8 or 10 over the course of a year or so. I paid a lot for each. In those days, I couldn’t afford to keep such things. So, I immediately sold off each of them. Seller’s regret. I wish… Maybe this visit to Manhattan will be memorable and generate a blog.

Here’s an excerpt from their history:

Prohibition forced Jack and Charlie to hide their liquor. They employed Frank Buchanan to design a system of camouflaged doors, invisible chutes, revolving bars and a secret wine cellar. The cellar was actually part of No. 19 next door, so staff could honestly say there was no alcohol on the premises. It housed 2,000 cases of wine, including the private collections of Presidents Gerald Ford and Richard Nixon, Elizabeth Taylor, Sophia Loren and Aristotle Onassis.

When I awake in New York Saturday, it will be fall. Two full seasons since so much changed at spring’s beginning. I’ve laughed 10,000 times with a friend. 5,000 laughs a quarter equals 20,000 a year if things continue.

I’ve started gardening seriously. I’ve put in new beds and transplanted a few hundred seedlings. I’m ordering a couple thousand daffodils and other bulbs. Fall will have me busy digging away.

Last week’s book story began with the end of my golf trip to Scotland with three old friends (and this time another foursome.) Scotland was good. I walked 5 beautiful golf courses in 5 days. The Duck’s Inn in Aberlady was a blast. It was built in the 1600s. The room I shared with my friend Cap was tiny and “rustic.” It had a great bar downstairs. There were 3 cask ales on tap. I enjoyed numerous Doom Bars.

Since I was not returning Sunday with my friends, I needed to find a ride to the Edinburgh airport about 45 minutes away. Duck’s Inn arranged for a Mr Findley to meet me outside at 7 am. My flight wasn’t until noon. I didn’t want to risk missing the plane or having some other problem that would prevent me from getting back for my son’s wedding. That also gave me time to finish and tune up the story. I wouldn’t have a chance to edit it. I would be in the air until 330 pm eastern time. I found a quiet bar and tapped away at my laptop til it was done. I emailed it late Friday morning to Maryland (where it was 5 hours earlier.) No one would be there to get it til 7 am. I celebrated with a Bloody Mary. I hoped I would get some daytime sleep on the plane. The weekend ahead would be monumental—literally, it turned out.

The plane landed at 3 pm at Dulles. I had applied for Global Entry in June but had still not been approved. So I got into line with several hundred other US citizens or otherwise documented persons. I didn’t notice how long the line was for the non-residents. The wedding rehearsal was at 5:30 at the Congressional Club. This is not the Congressional Country Club with which I was familiar. I thought I’d have enough time… The TSA and DC traffic conspired against me, and I arrived just in time to give family members a ride to the rehearsal dinner. Then things got interesting. My son had told me we would get a tour of the West Wing and bowl at the Harry Truman bowling lane in the Executive Office Building after dinner. Unfortunately, the bowling alley was “broken” but after passing through a very serious security checkpoint, a friend of my son gave both sets of parents a tour inside the West Wing of the White House. In my jet lagged state, the event was a bit surreal. It felt like it was well after midnight to me. But I got to walk through the West Wing! I peered into the Oval Office. Years ago we were asked to recreate the “look” of the books in there for a movie. We’ve done so many book props for movies and TV shows. That’ll be a book story someday. “We’re gonna put you in the movies.”

We walked into the Rose Garden. We were led through “history.” I trod in the footsteps of so many presidents and other famous and infamous historical characters. I wanted to take a LOT of pictures, but it was forbidden. I did get some when we were outside and in the Press Briefing room.

Somehow I made it home. It felt like 5 am Scotland time on my biological clock.

Speaking of movies, Wonder Book is launching a Film Series at the iconic Weinberg Center in 2019-2020.

I wanted to give something back to the Frederick community. We chose mostly vintage movies with something bookish about them. And, selfishly, some of the movies I voted for are ones I’d love to see on the big screen there.

The excellent local distillery—Tenth Ward—will be having samplings there as well as serving bookish cocktails in the Happy Hour before the screening. We will also be showing Maryland filmmaker shorts before the feature. With movie snacks and a full bar, there will be something for everyone. We plan to offer our t-shirts and perhaps books related to the movie being shown or cinema in general.

But back to the wedding, the ceremony wasn’t until 430 pm Saturday, so I did sleep in a bit. Then I stopped at the warehouse to get a bit of work done. I’d been away for a week and plenty of books were backed up waiting for my attention. Merry & Pippin, my Jack Russells who were weekending in the warehouse, were just bouncy to see me. I was glad to see them as well.

Then it was time to head back down to DC. The Congressional Club is on New Hampshire Avenue all the way downtown. I was supposed to limo over to it from the Mayflower, but my SUV would be needed to haul away…you guessed it—books after the ceremony. So, I drove and parked in the oval drive.

I was able to explore the public spaces. The place was full of history. The “club” had been established by an Act of Congress. Teddy Roosevelt signed off on it. The walls were covered with signed First Lady portraits and other historical things. 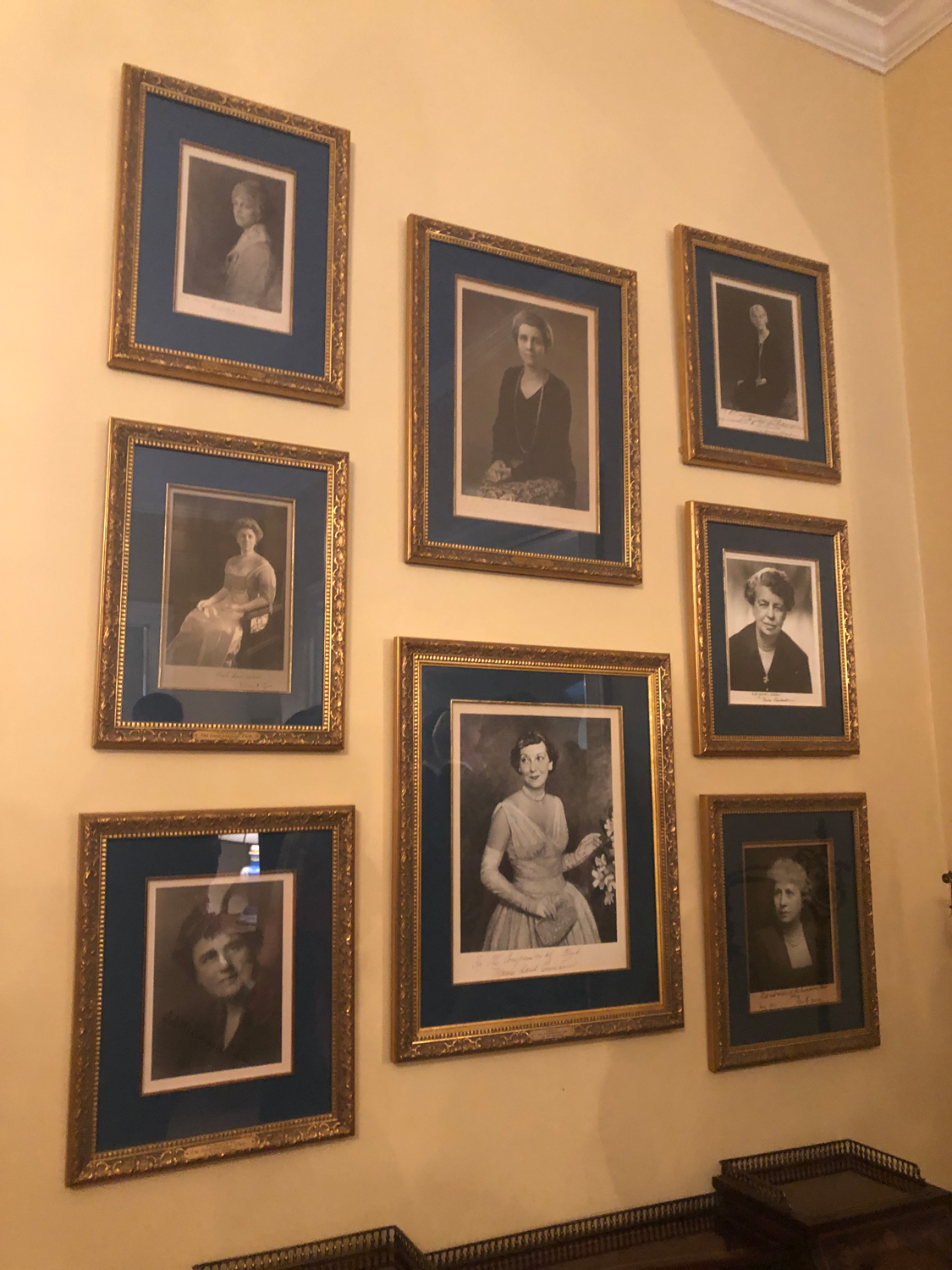 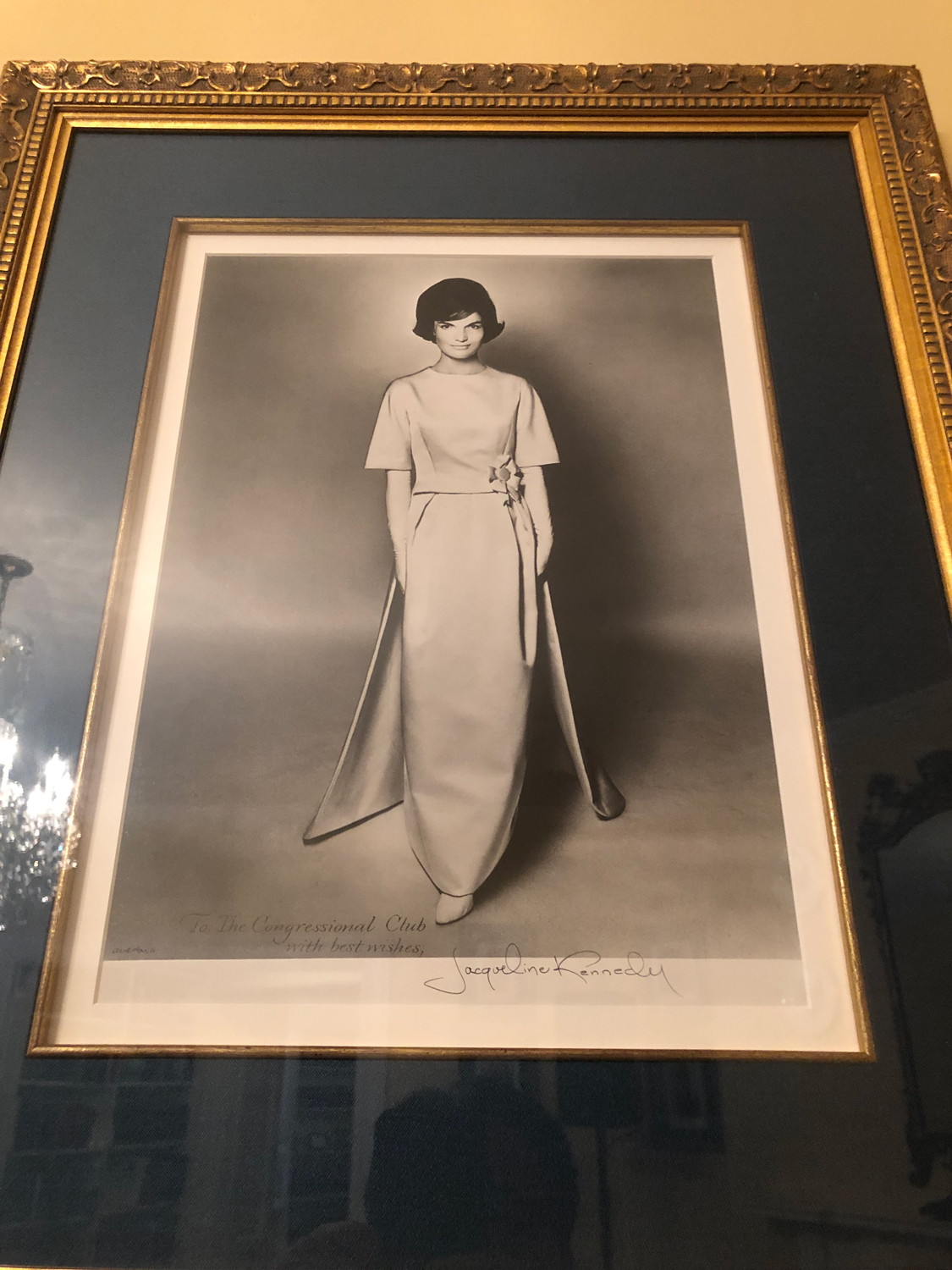 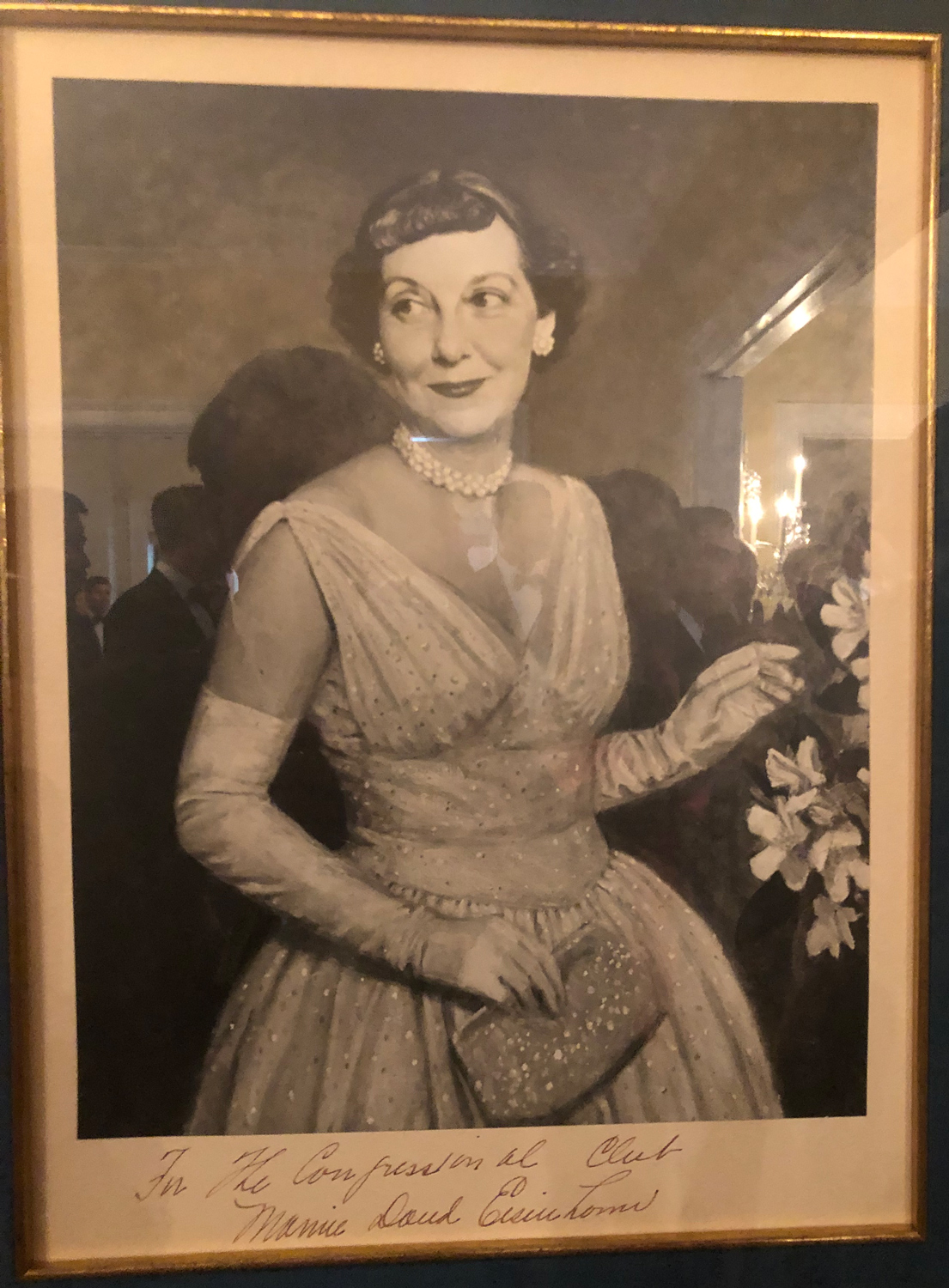 I rarely take a selfie. But then, I haven’t worn my tux in years.

There were built-in bookcases, but there wasn’t anything special on them. Mostly the kind of stuff we offer at Books By the Foot. The real nice books were upstairs—being staged for the wedding ceremony. For my son and his spouse had visited the Wonder Book warehouse a few months before and had chosen a LOT of antique leather-bound books as well as some very attractive vintage law books (both are lawyers.)

The wedding planners had laid the books out perfectly. The ceremony was beautiful, spiritual and flawless.

The rings were in that Shakespeare book safe on the mantle. 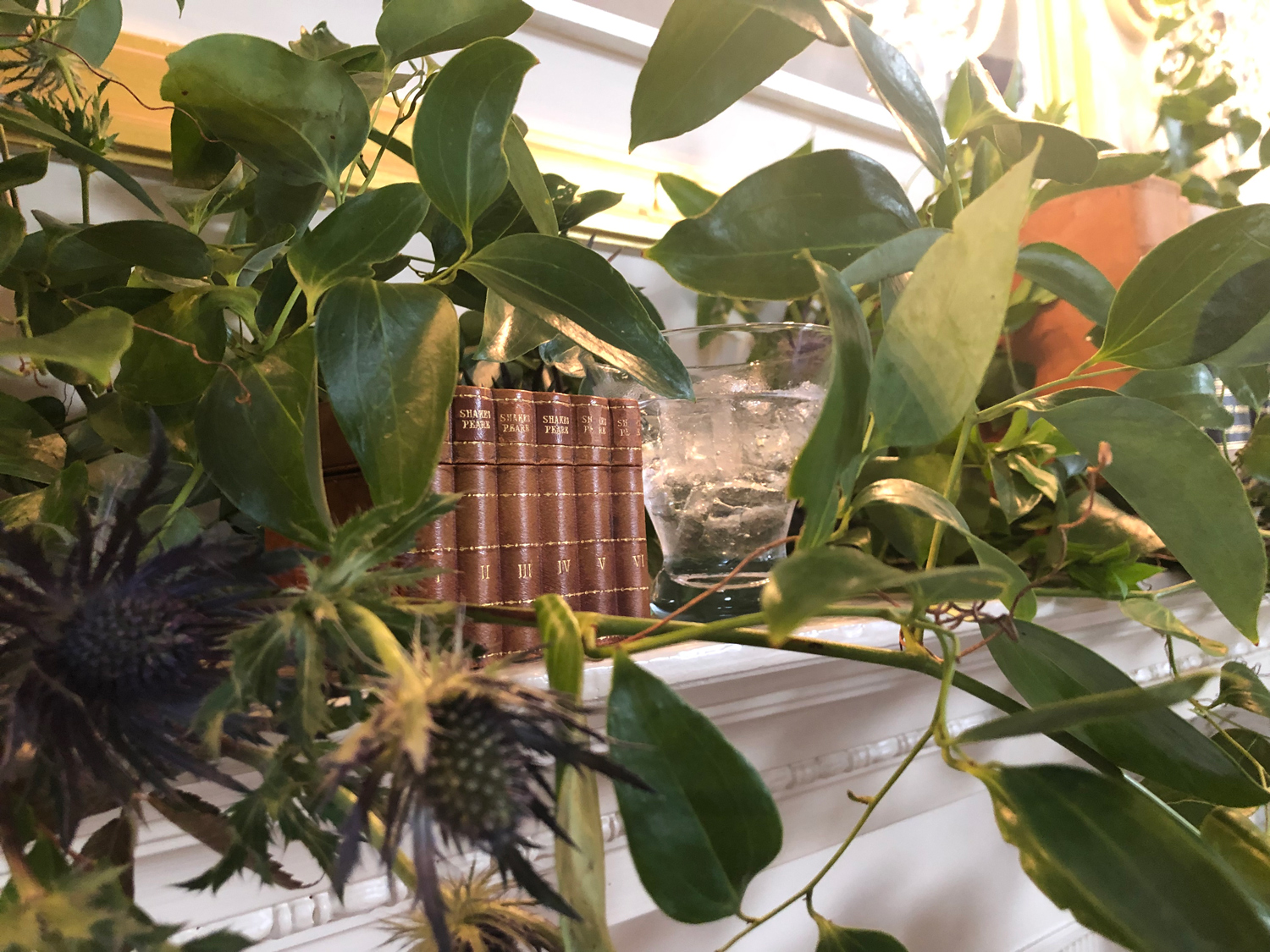 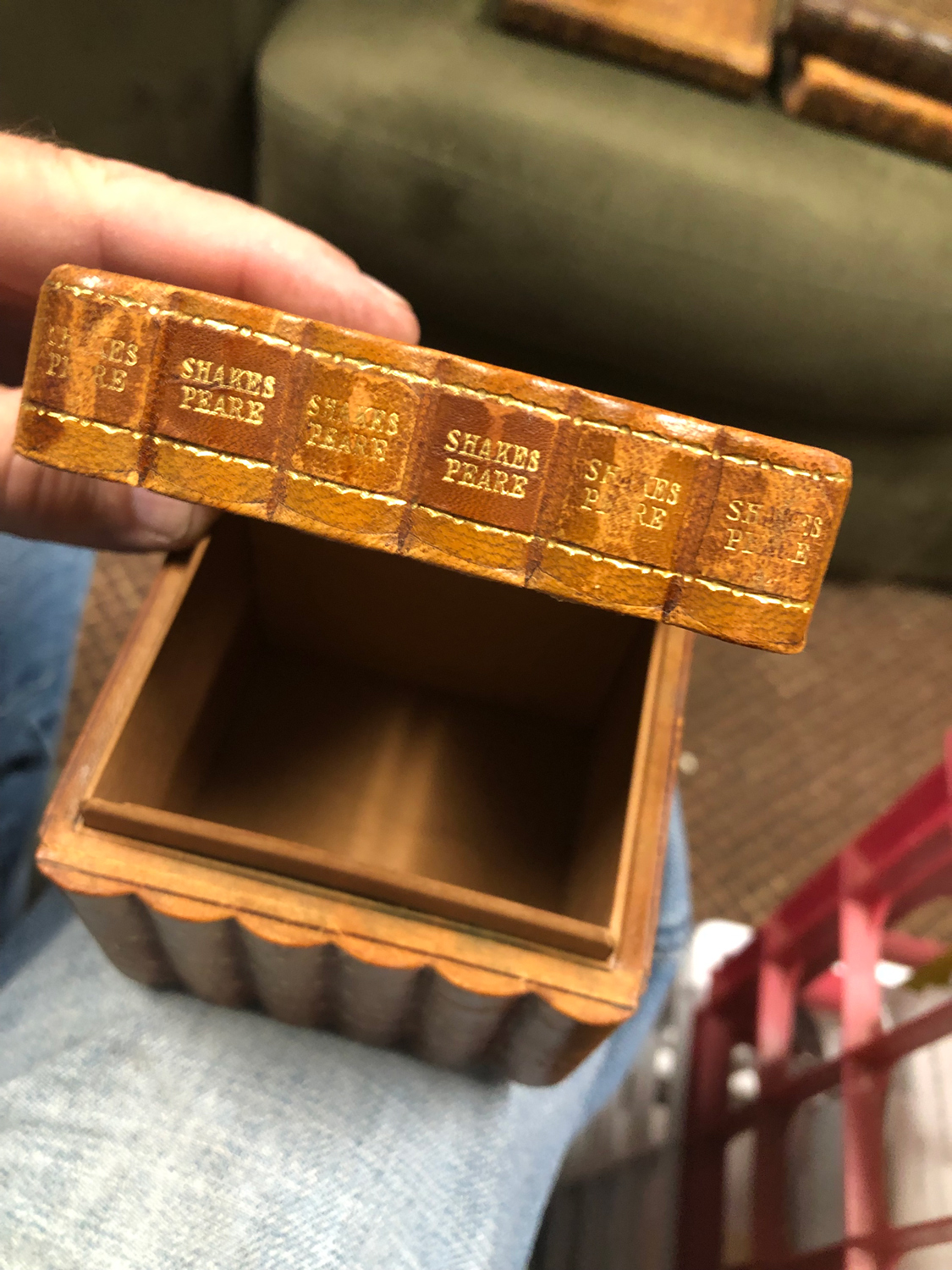 All 150 or so guests and family marched out and downstairs for a cocktail hour. While we were down there, the chairs were whisked away and dining tables were set up. There were now about 20 round tables where the rows of chairs had been. I was seated at the “Waynesboro” table. The Pennsylvania town where my son grew up. Each table had a place name on it—some geographical location that meant something to the couple. Each table also had a centerpiece of beautiful antique leather-bound books. 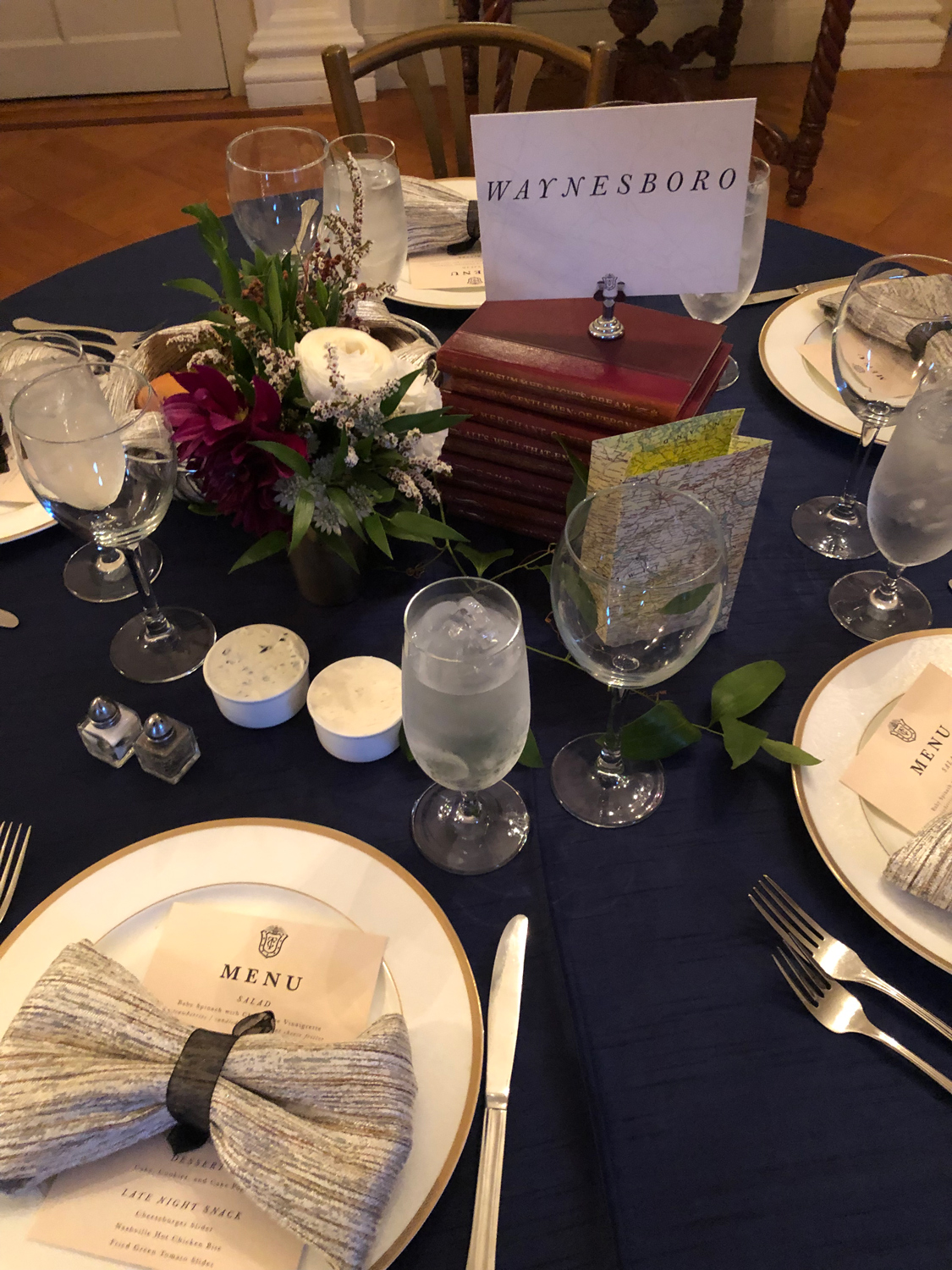 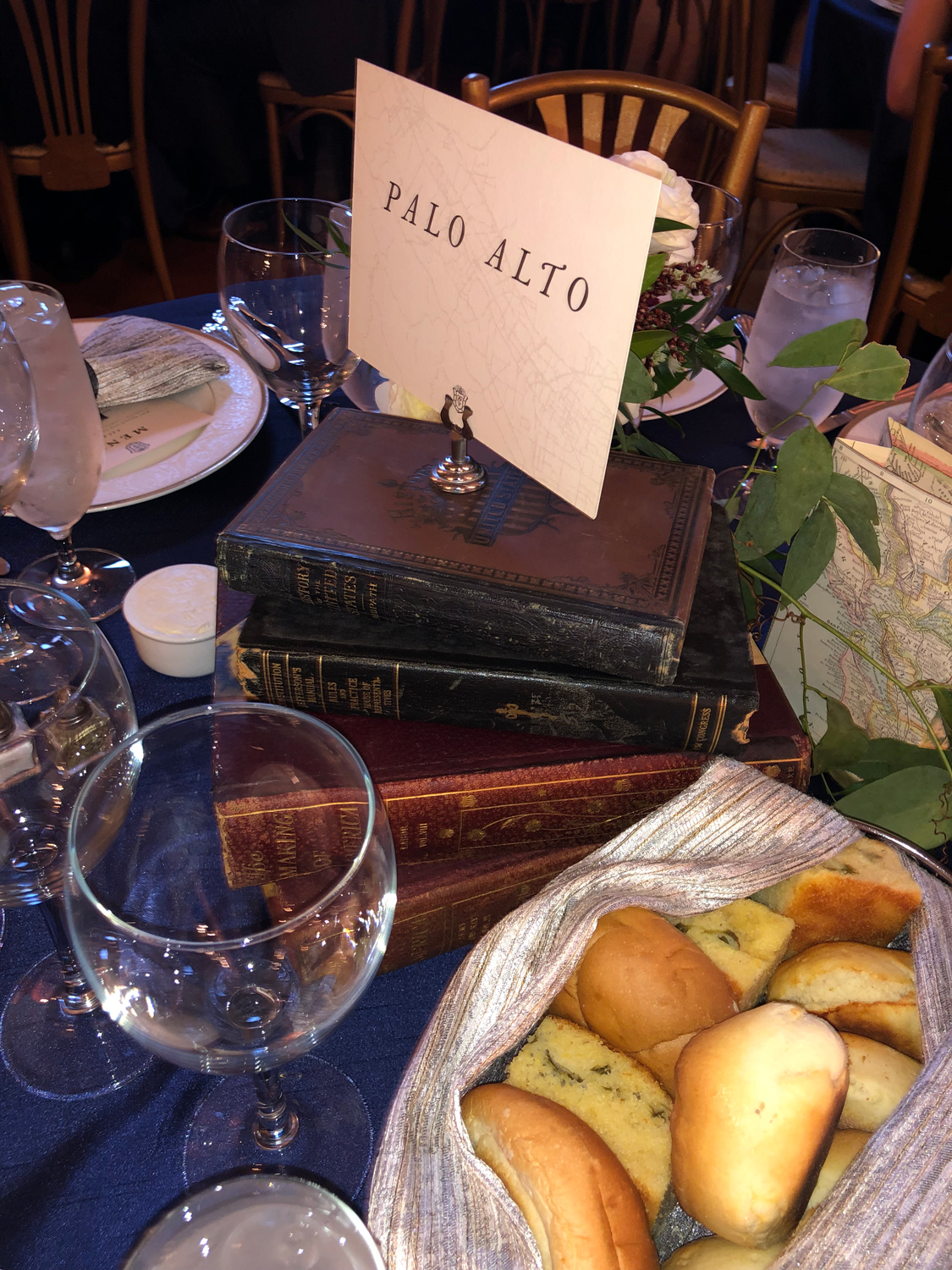 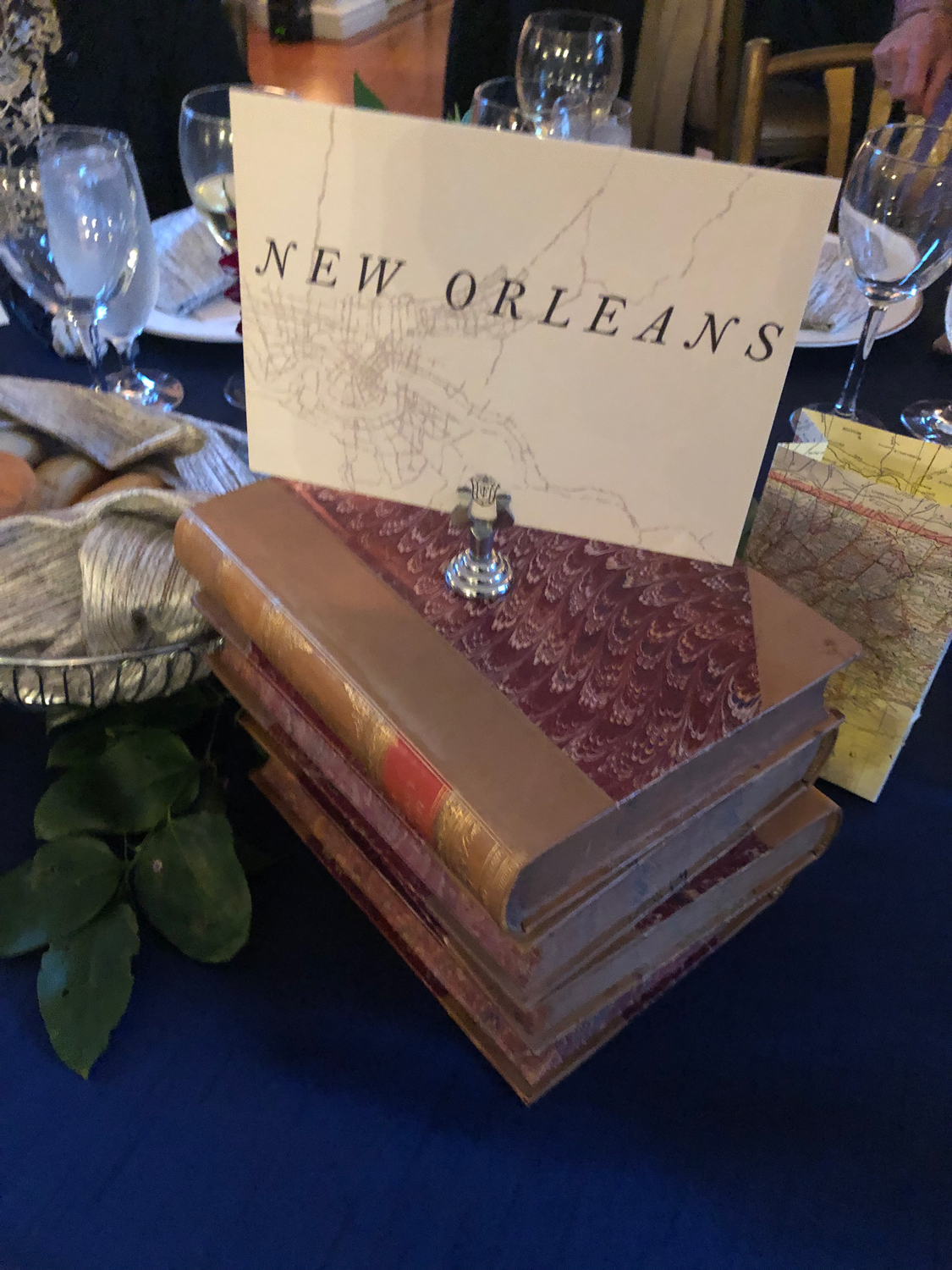 So went my son’s bookish wedding.

They made The New York Times. I’m guessing they will be there more in the future.

I somehow dragged myself home to Frederick—again feeling like it was 5 am—only to return to DC Sunday morning for a brunch. Then we went to the couple’s apartment to drop off stuff they had brought for the wedding. Finally, I headed back to Maryland with my SUV loaded with boxes of beautiful books—to be restocked at Books By the Foot. Mostly the best we have at $350.00 per foot.

What was my wedding gift? A signed picture of the Supreme Court justices and a wonderful facsimile of Thomas Edison’s desk. 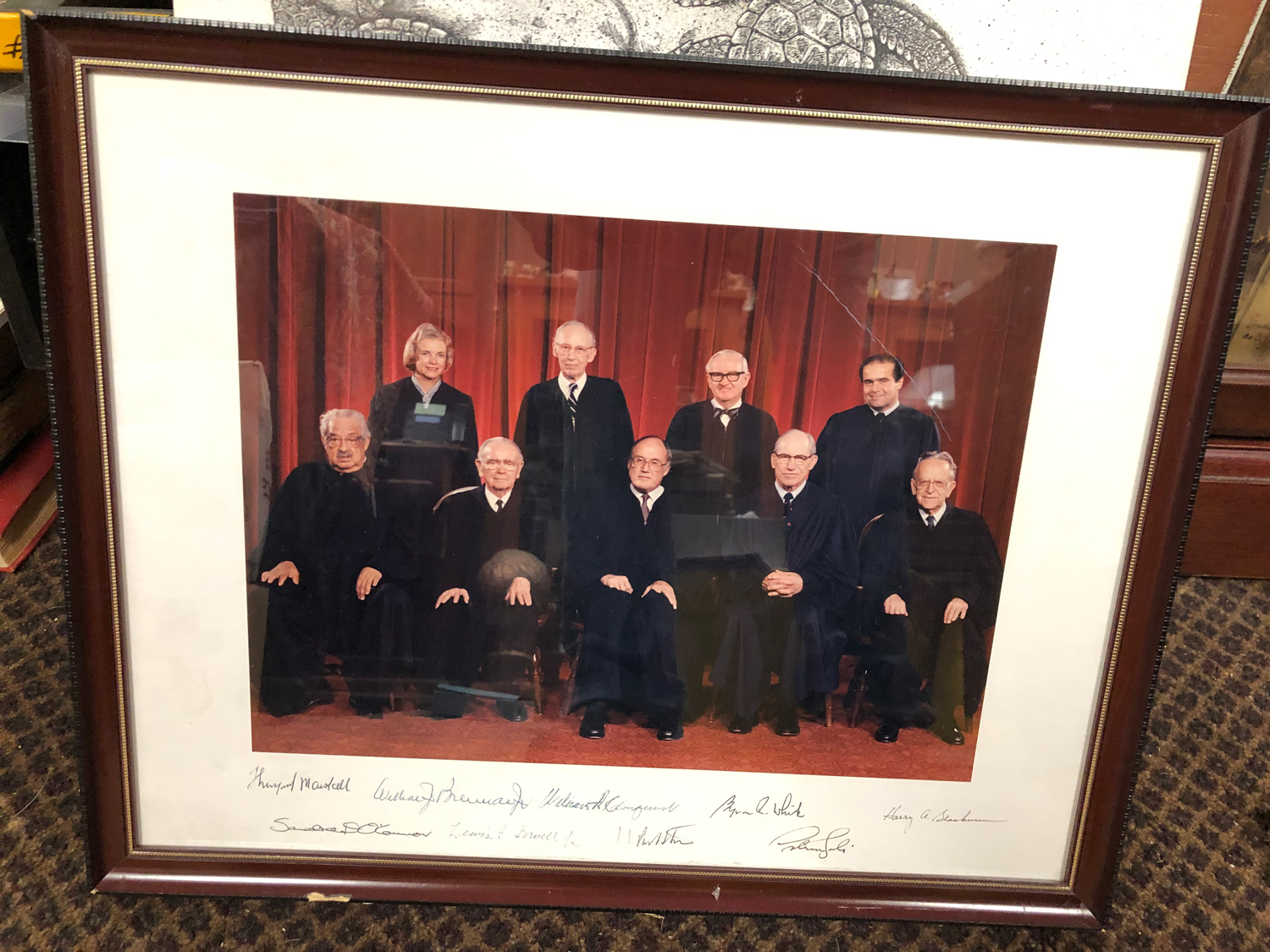 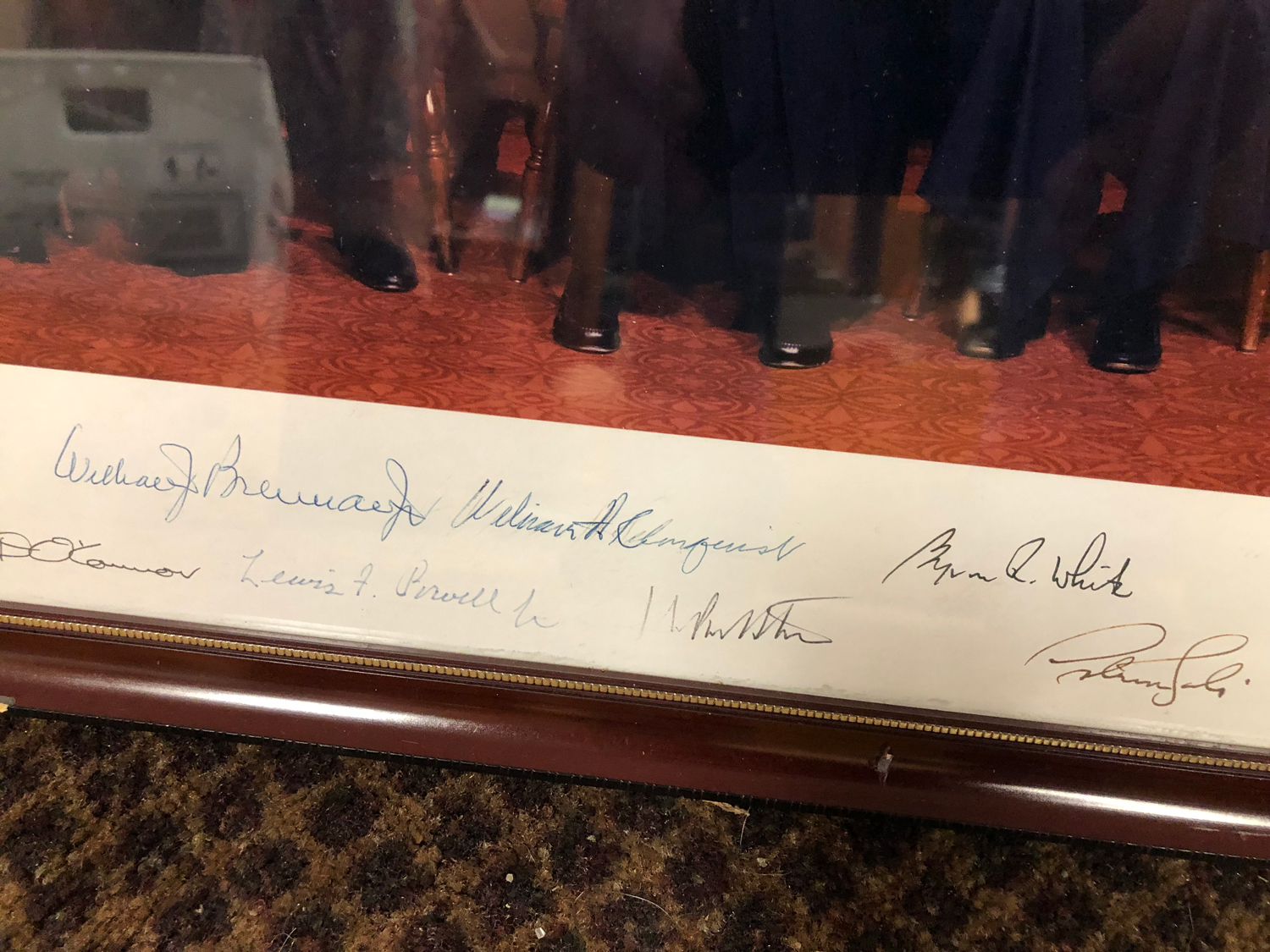 On Monday, the happy couple headed off to New Zealand and Australia to visit The Lord of the Rings things among others.

For me, the work week began as usual. Although I was still quite dazed and confused from all the travel and excitement.

I had a package waiting for me. Alan Robinson had sent me three original watercolors to put in my tall folio of his 1980 The Raven. 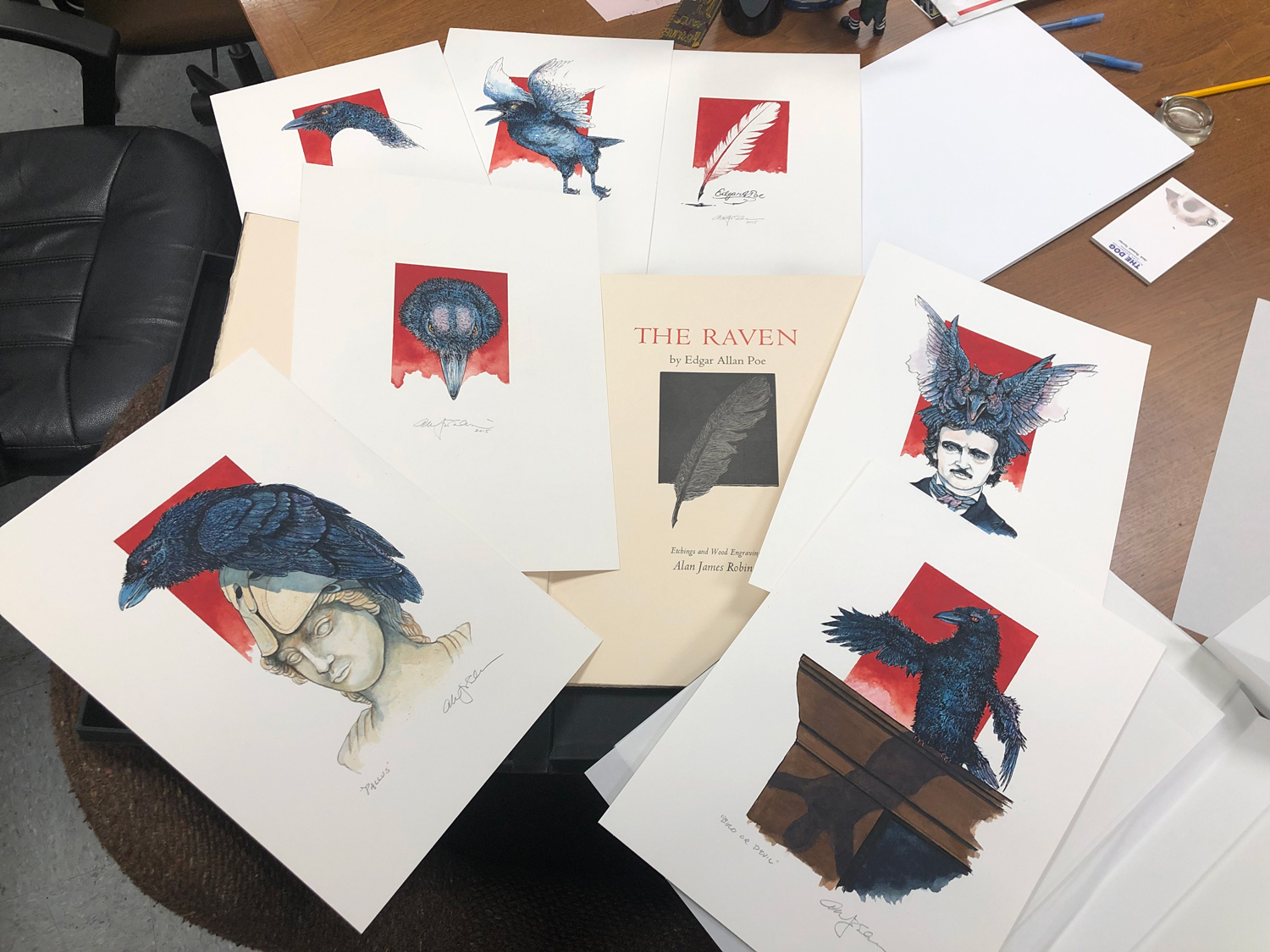 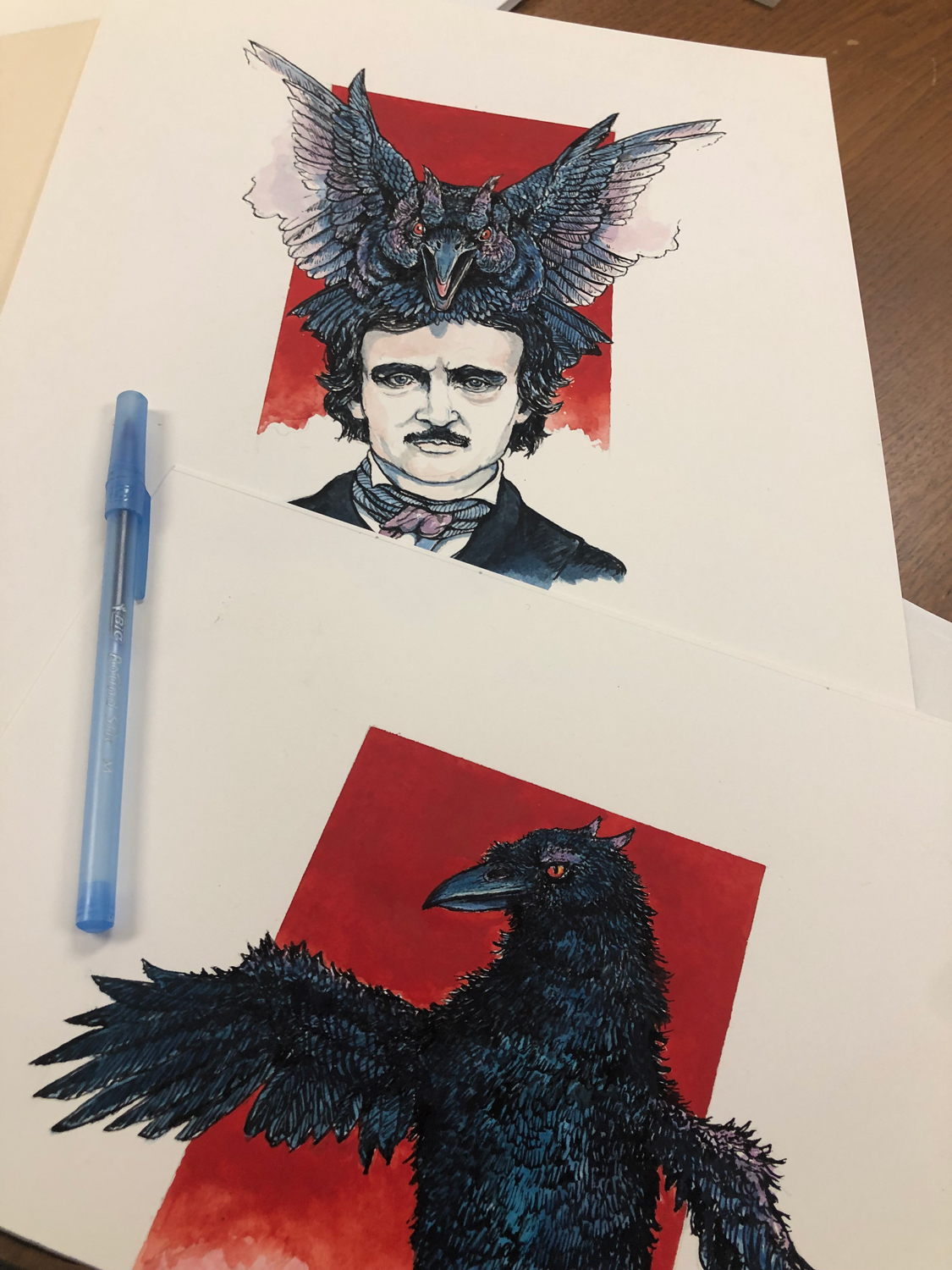 We had also received the last three t-shirts using the images we commissioned from him for the “If There Were No Books…” series. 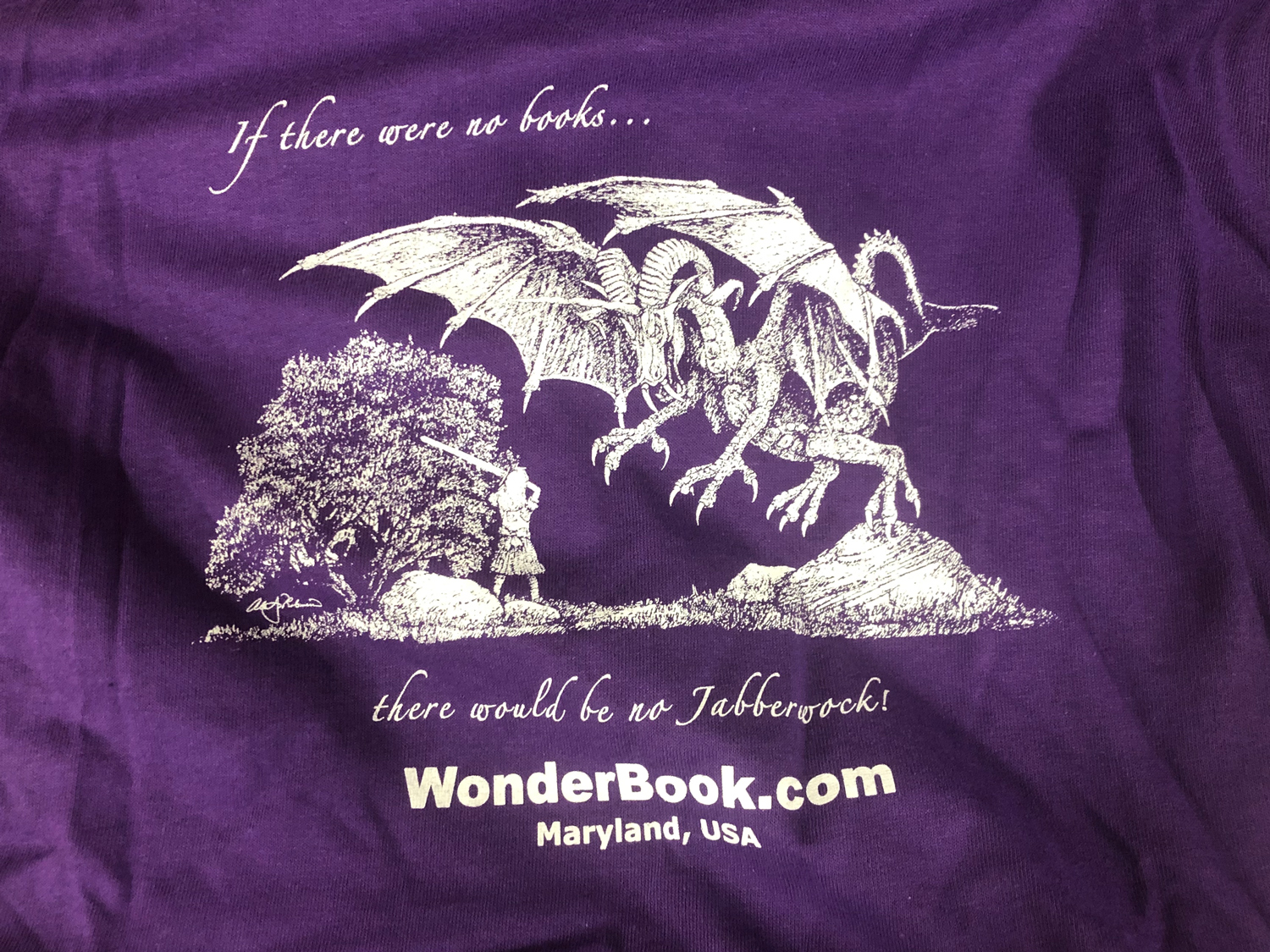 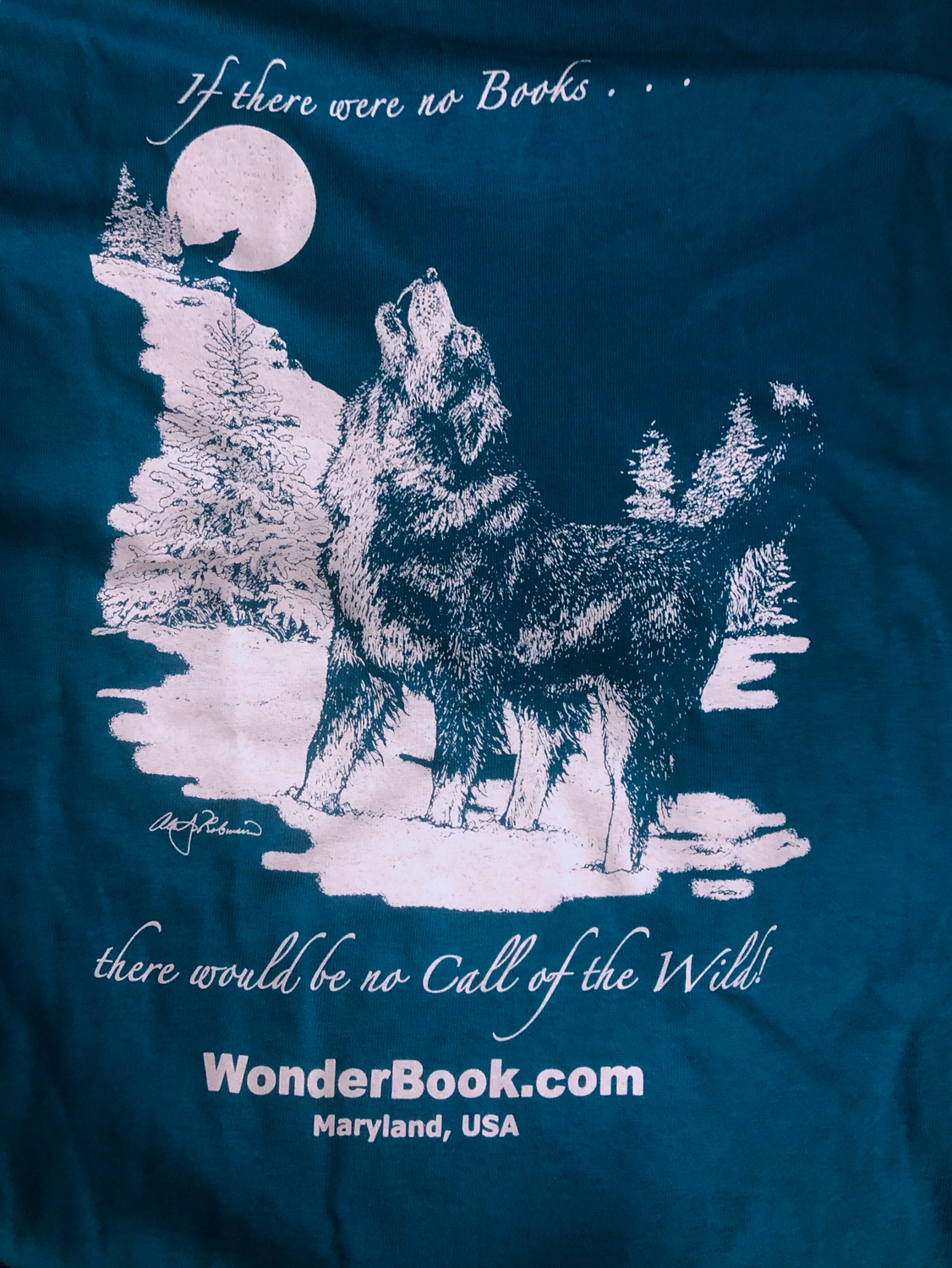 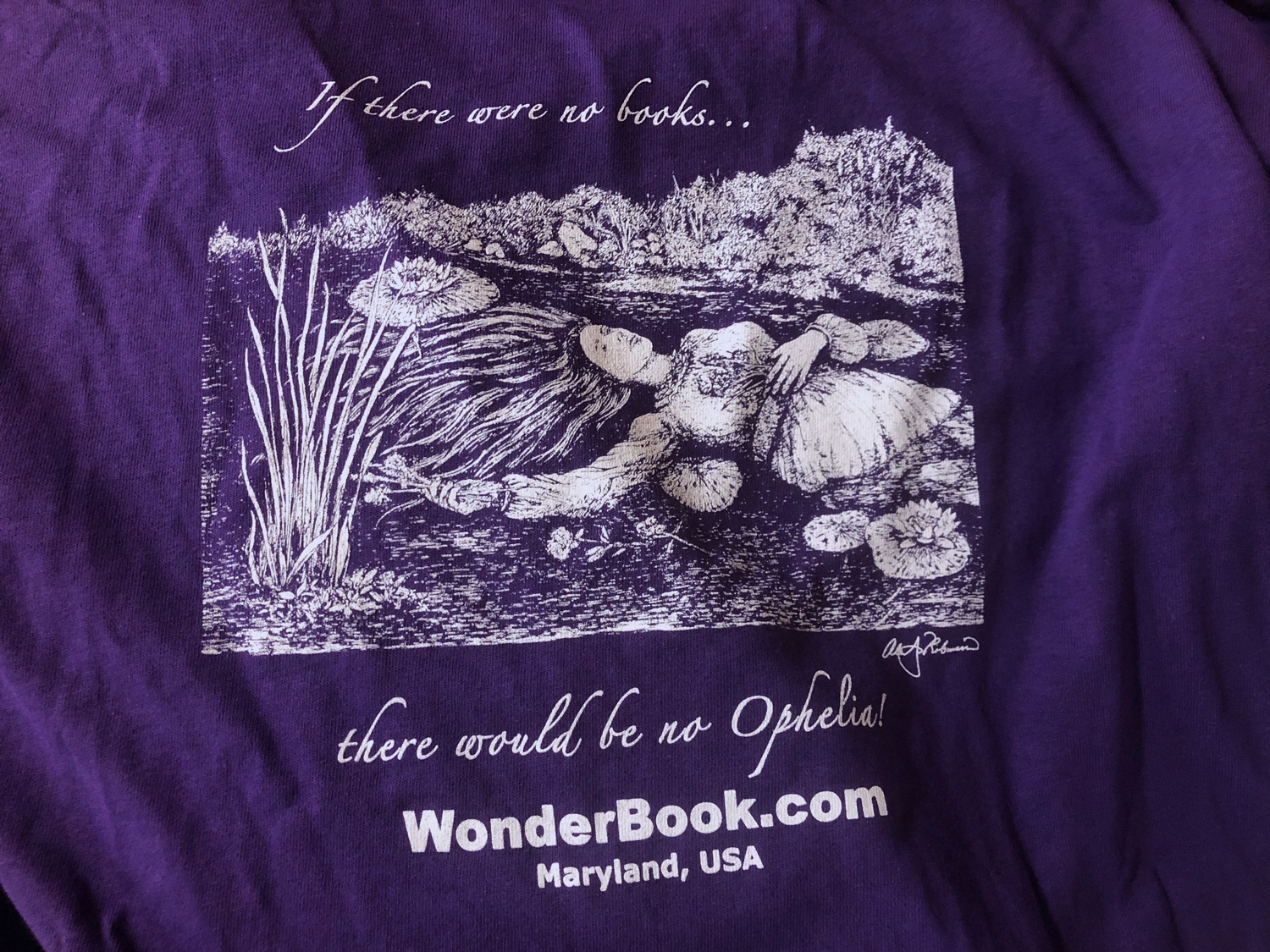 This concept came to me in a dream a few years ago. Somehow the thought occurred to me that “If there were no books, there would be no Unicorns.”

Fortunately, I wrote that down. From that Alan and I came up with ideas for 24 literary images. 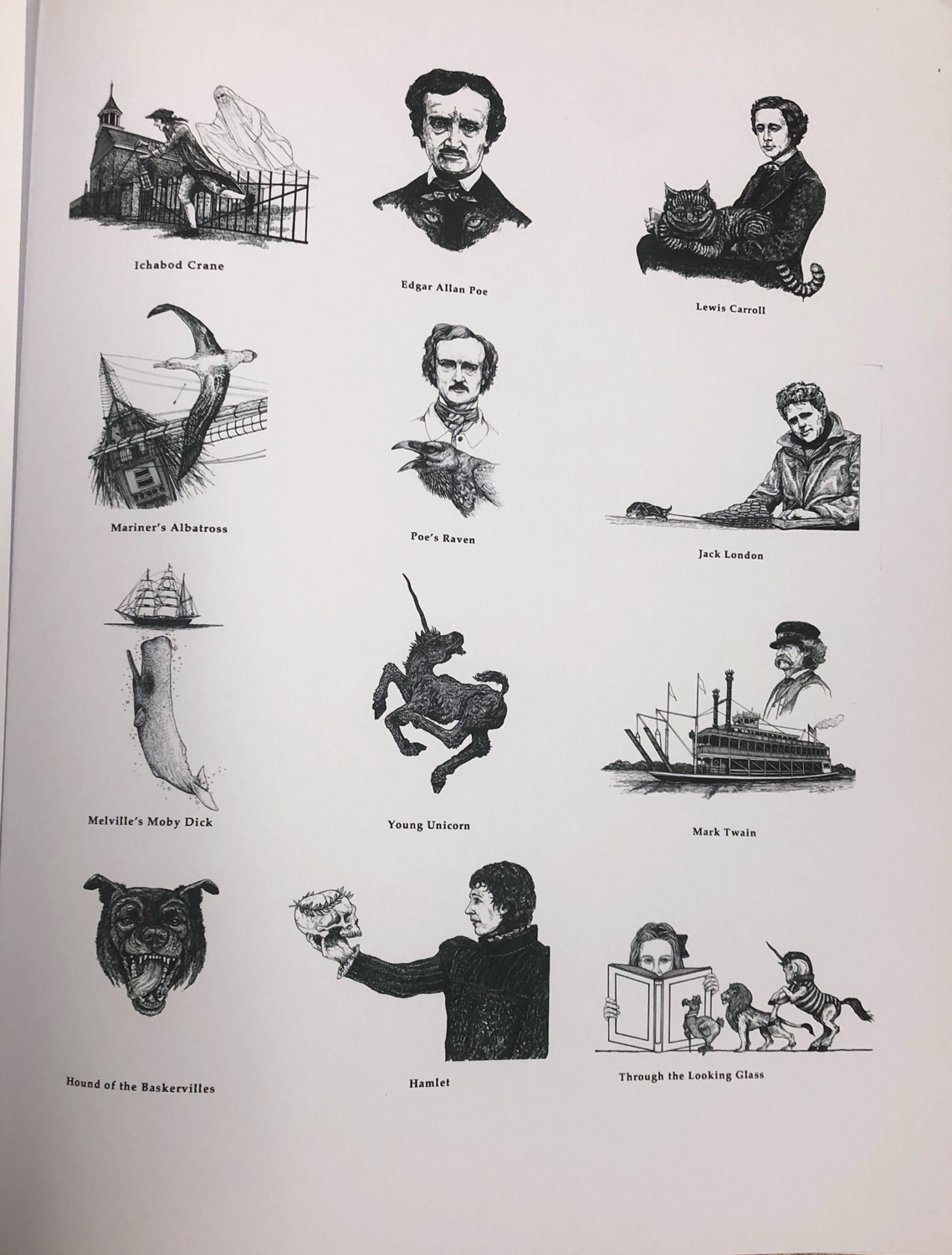 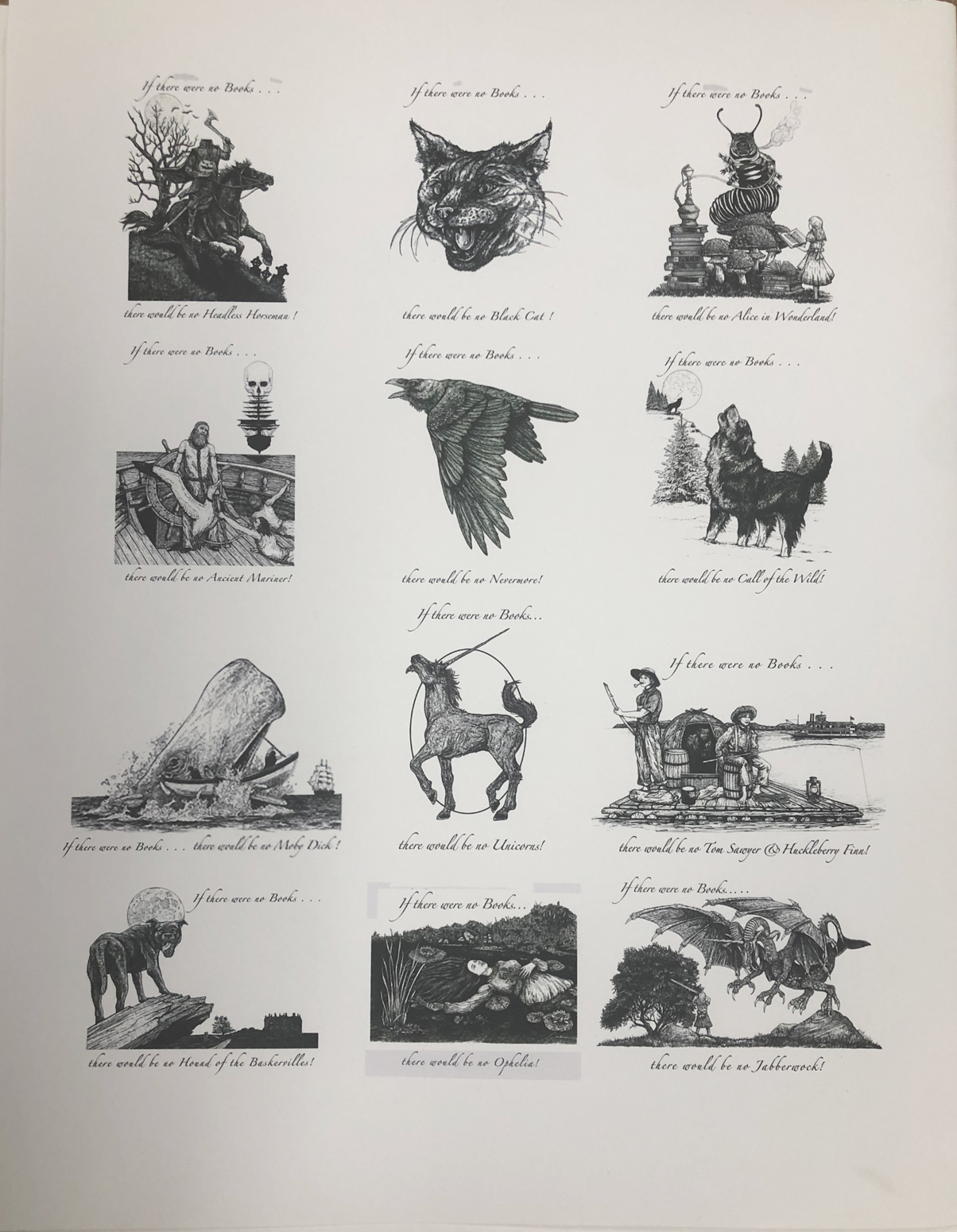 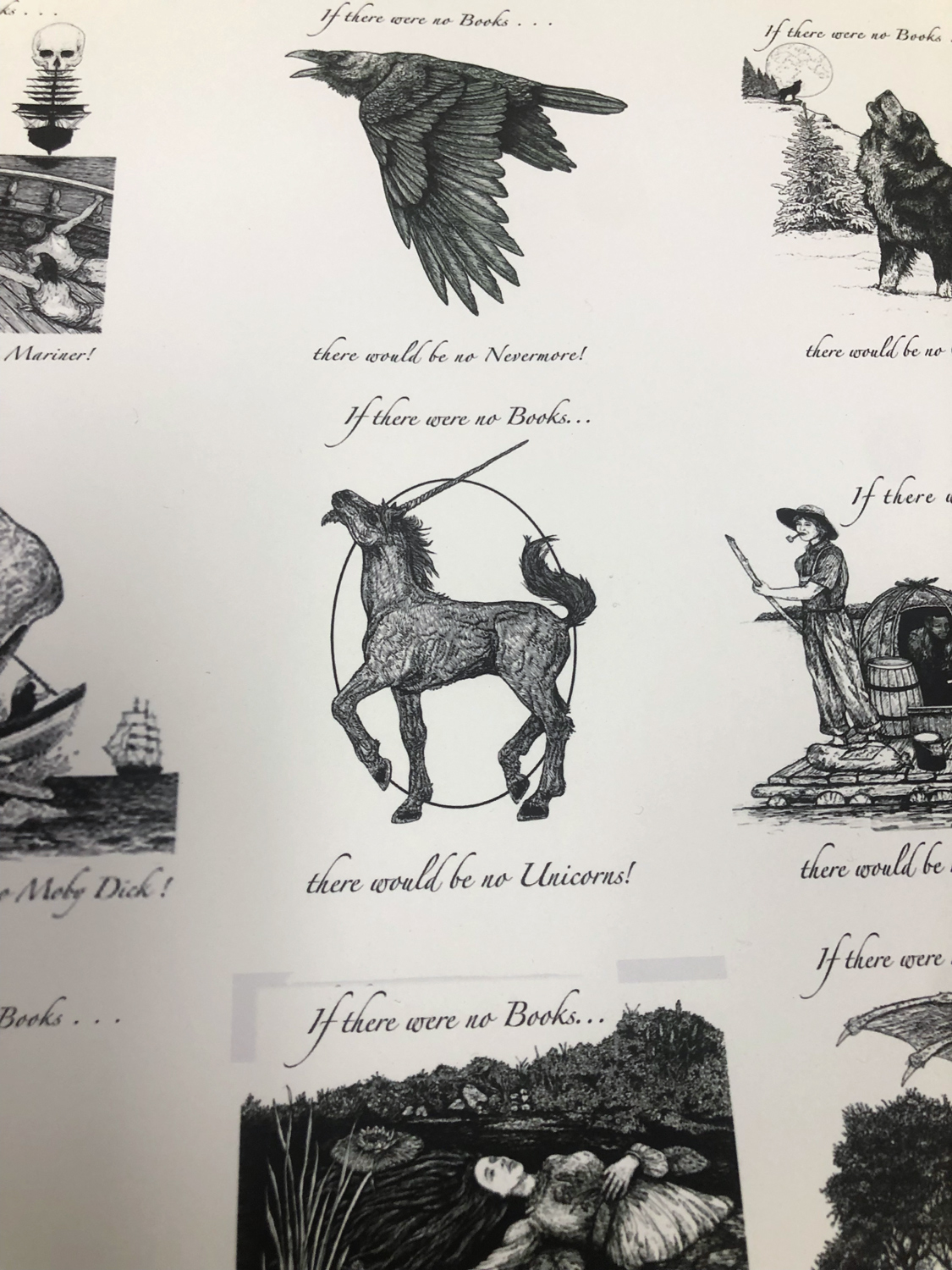 One from each book has been printed using letterpress and limited to 100 numbered and signed copies. (If you want, I’ll sign yours too…LOL…)

I still haven’t caught up. I’m tired… It’s good to be home.

There was a wonderful burnt-orange dawn this week.

Any day now, the sunrise will move into the gap that provides my view from the forest. It will pass through the gap in 10 or 12 days on its way south.

The equinox is another important annual bookmark. It won’t be long until I build the first fire in the woodstove. I will put to good use the wood I’ve cut and hauled in this year. 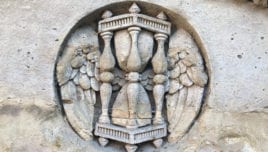 We made our semi-annual pickup at the Arlington Virginia Library on Tuesday. Well, the first pickup. Two vans. Four guys... END_OF_DOCUMENT_TOKEN_TO_BE_REPLACED