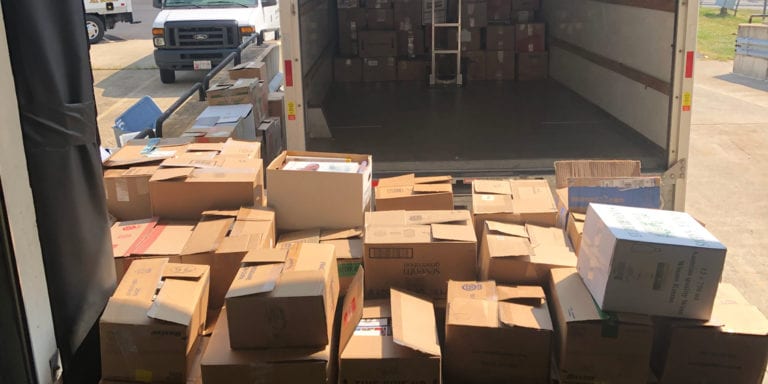 We knew it was going to happen.

Nelson had told us he would leave four large UHaul trucks of library sale leftovers in our dockyards Sunday.

We would arrive Monday with 1500 boxes of books to unload.

Plus, each of the three stores would have a total of 4 full vans and a truck.

Plus, we had promised to go pick up the leftovers from the semi-annual Reston Library book sale Monday morning. That would add hundreds of boxes more arriving on Monday.

I looked around the warehouse. It was stuffed.

Perhaps like the captain of the Titanic when he saw the unavoidable collision ahead I thought something like:

We would get them inside…or we wouldn’t.

I spent Saturday clearing off a bunch of carts and couple pallets. One pallet was one the last of the Gach hoard. 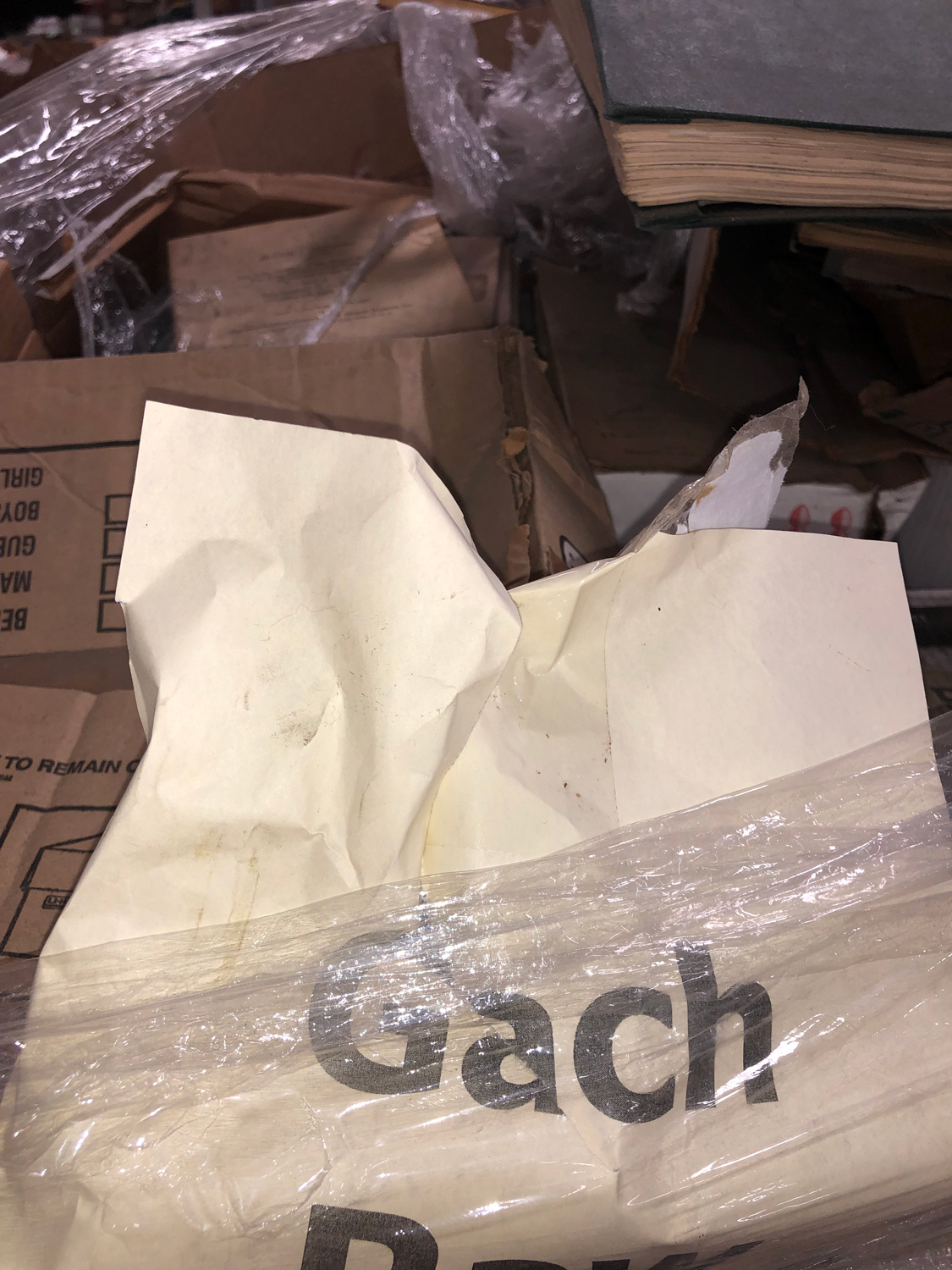 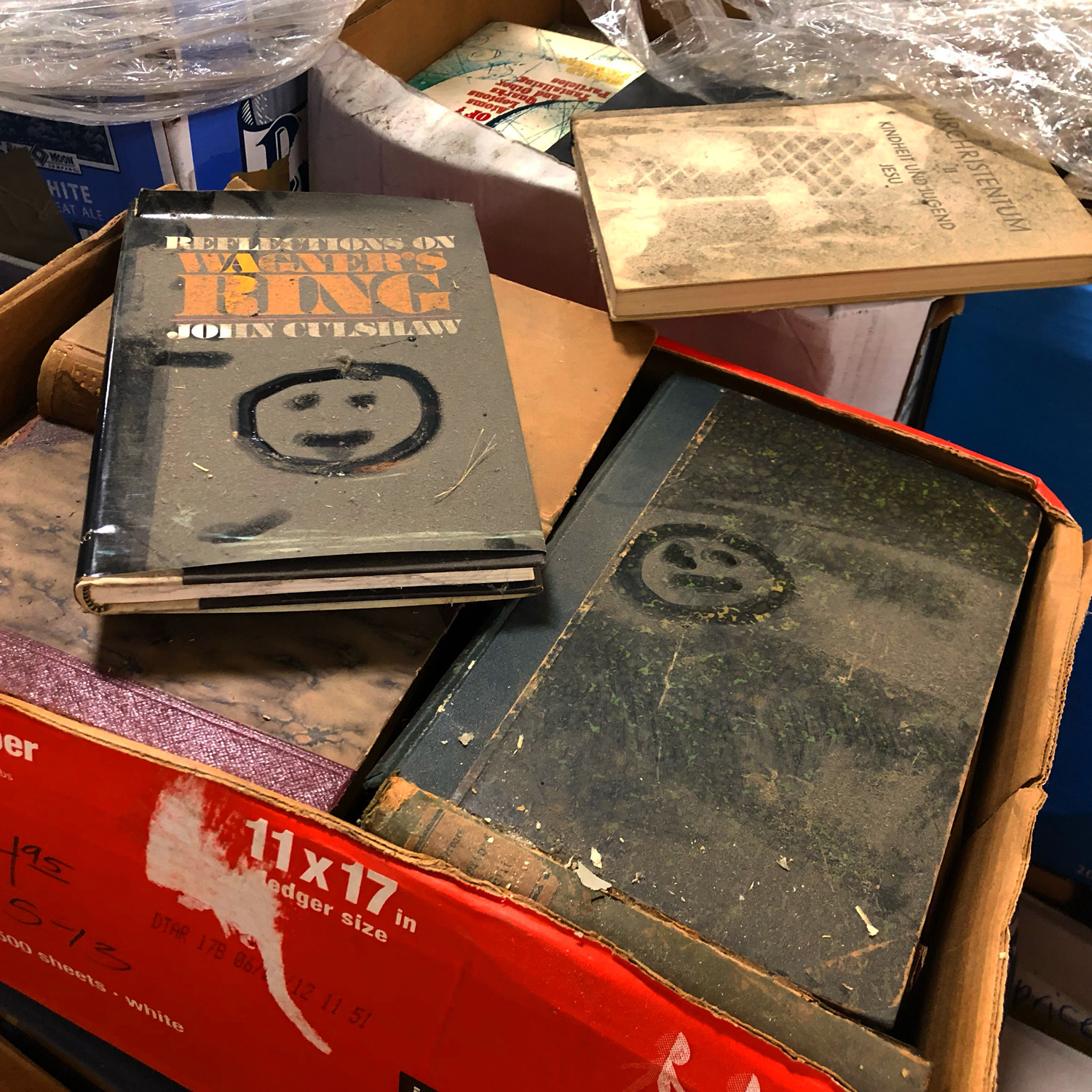 It has taken nearly seven years to go through them. There are still a number of them that were created of very difficult and problematic books. Some years ago I had no idea what to do with such material. I’ve learned a lot in the last few years. It keeps this enterprise interesting.

I was having a cookout at my house Saturday evening. I wasn’t nearly ready. I went home and rushed through cleaning the house, hiding stuff in closets, blowing the leaves and tree debris off the driveway and porches and decks and then prepping food to burn on the grill.

I was toast when the most of the guests arrived over an hour and a half late. A “few” martinis was not a great idea.

Still, I’m told the food and company was good. The after party was amazing. I’m a lucky fool.

Sunday I dragged my bedraggled self into the warehouse and ploughed through more books. The work I did was like bailing water from a sinking ship with a teacup.

Monday I arrived in the morning a little like a general on the morning of an unavoidable battle. I marched around the warehouse. In the Books By the Foot section, I espied a cart laden with old and older copies of The Joy of Cooking.

We get so many of these. They are such an important of many people’s domestic lives. We get far too many to sell individually. So we offer them By the Foot. They seldom sell, but in this case a Texas hotel had ordered 25 linear feet of them.

I had to smile. It was absurd but at the same time a sort of victory.

Then I looked outside onto the dockyard. A fleet of UHaul trucks was mere yards off our docks.

Clif was busy getting our 24-foot truck emptied. And a van. He, Ernest and a helper would go to Virginia. I’d be left behind to coordinate the home-front battles.

One warehouse helper had called out sick. The stores would need to have their full vans swapped out. I went to the office and demanded:

“Three warm bodies who are able to lift lots of boxes.”

I got those poor folks oriented. They were troopers. They’d been hired for data entry, and here they were being thrown into the breech.

I then put myself into full Tetris mode. Long, long ago I played video games. (Thank God I kicked that habit early on.) But I’d learned a lot from that puzzle game. I’ve described each of the thousands of pallets of books and stuff here as puzzle pieces. There is a finite amount of floor space. You can go up in the air one level by stacking one pallet atop another.

I began manning the pallet jacks and the forklift here and there and everywhere.

The most obvious way to make space was for sorters to empty boxes on pallets and thereby empty pallets. The poor sorters had their spaces cramped even further as I pushed just…one…more…pallet of “raw” books at each of them. I searched the vast building for nooks and crannies as more and more pallets of books were created at loading docks #1 & #2. (There are 21 docks here.)

The Reston team wouldn’t be back til mid afternoon. I hopped in a van and headed south to do a Gaithersburg van swap.

I did a whirlwind inspection with the manager. It looked good. Great in fact. Maybe too good? Is something wrong? There are no piles on the floor. The shelves aren’t jumbled.

That makes my paranoid self suspicious…

But I had to get back to make more spaces. When I got back and reversed my full van to dock #1, the big UHaul at Dock #2 was only about half empty.

There were still two full trucks out in the dockyard. I told Nelson we would pay the extra day rent on them both and continue Tuesday.

The only empty space on the property (beside the parking lot—which was no option—because it was raining for the first time in a couple months) was the recycling trailer. It was only half full. I hopped into the forklift and lined one side with recycling Gaylords. That left one side we could roll pallets of Nelson’s raw onto!

That helped, but we were still crushed.

Clif and Ernest returned in mid-late afternoon with another full truck and a full van.

We all did what we could, and then the day ended.

Tuesday the battle recommenced. This time Clif and Ernest were on site to help. It was touch and go, but we got Nelson’s trucks emptied.

Wednesday I decided I should go to our Hagerstown store. I have neglected it. When I went in, there were messes here and there. Many bookcases were sloppy.

This was my fault.

The manager arrived about an hour later. I took her aside. “Your staff is not doing what they should. This store is sinking, and the only way to raise it is to get them motivated to care about the books and the customers.”

I was out pulling books for a huge art order. I was looking in categories where you might not think you’d find art books. Birds for example…we had lots of Audubon. And a chicken cookbook amongst the aviary.

I did a walk through with the manager and brainstormed with her on sections that could be improved.

I’d let them experiment with a Biography section a couple years ago. I KNEW it wouldn’t work, but I’d let them experiment. It was about 6 bookcases long. I’d discovered years ago that although customers think they want a bio section, it is by nature a very random mess. You’d find Clinton next to Cleopatra. Madonna next the Madonna. There at the end of the section was the title Zelda in the “Z’s.”

“Let’s kill this section. People will look for Madonna in music. The Madonna in religion. Dickens with Dickens. Zelda certainly belongs in ‘F’ in literature with the other Fitzgerald stuff. We’ll send Cleopatra to Egypt. The Clints can go to Presidents and First Ladies.”

“Then we can use these bookcases to expand some categories that actually sell.”

On Thursday Tim appeared and said he had finished painting the Frederick City Farm.

The verdict is still out on then venture.

“Roberts’ Folly”? Or will it become something good and fun?

Now the week is ending.

We are back to the usual grind. The space crisis is over. Some other crisis will arise next week.

But the field is ours!

And we rescued some more great books.

Among them this snaky thing slithered in. 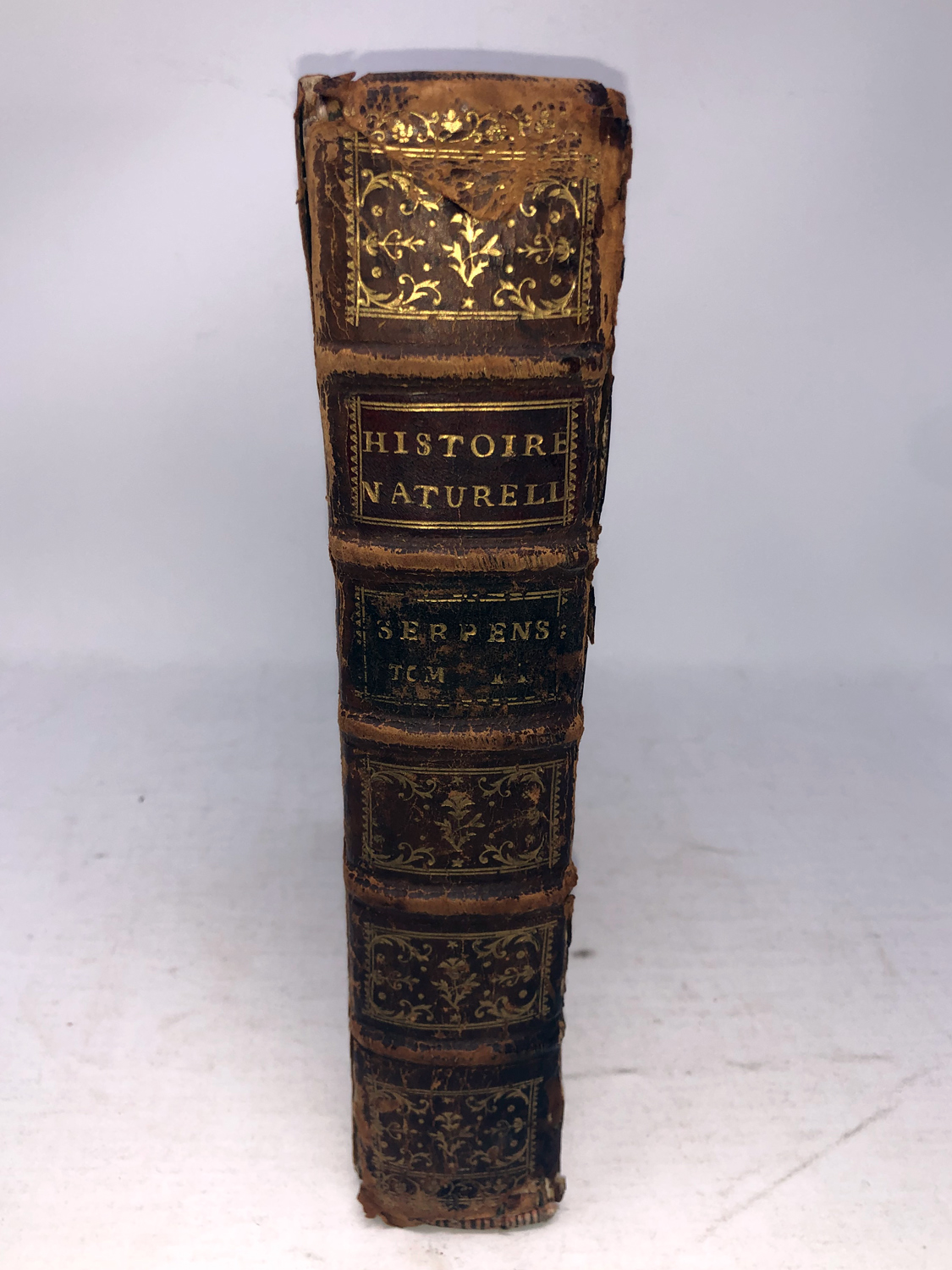 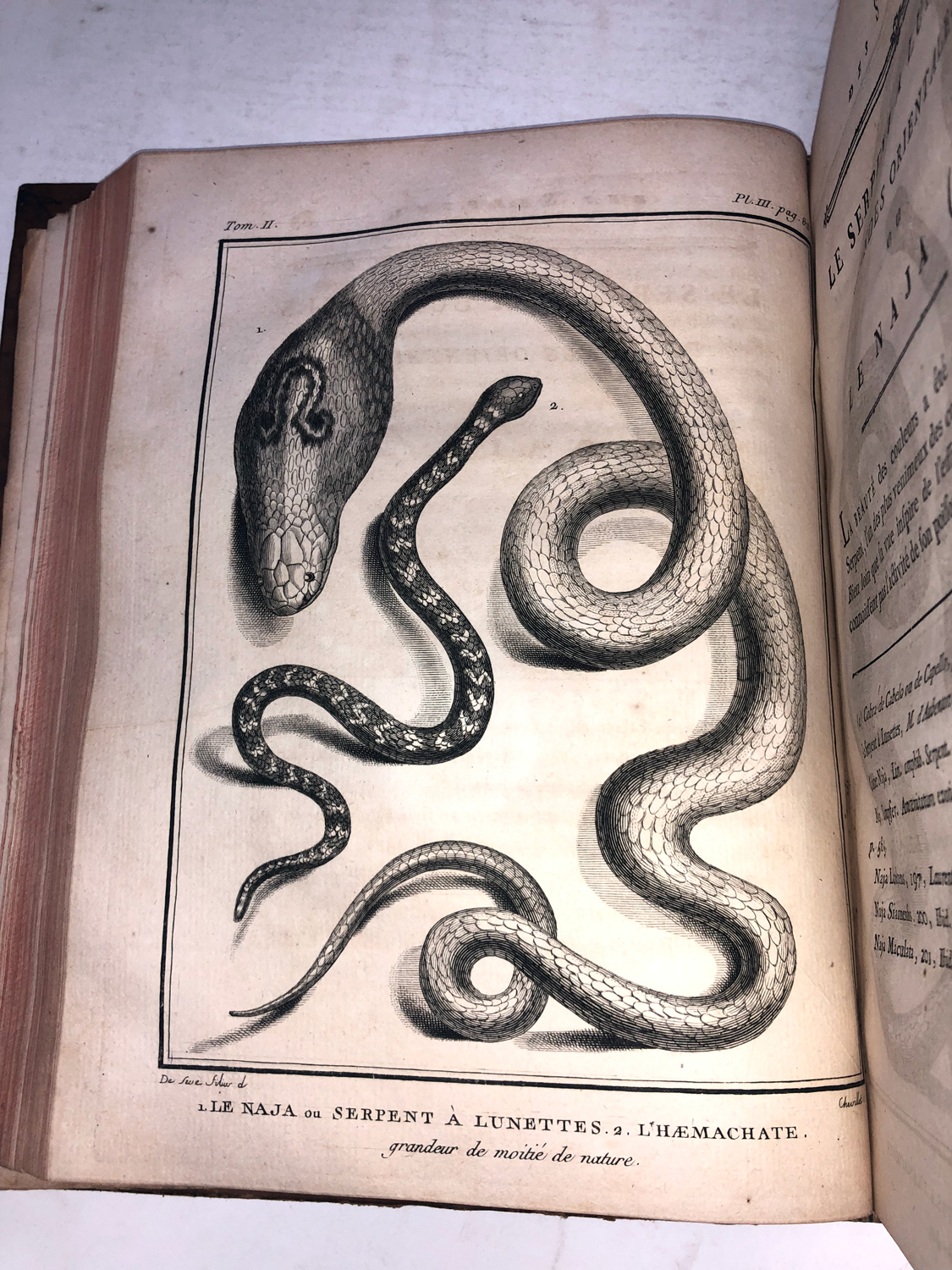 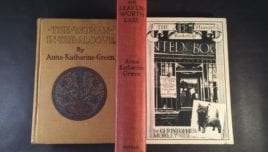 A Mrs. Minnich called me for an appointment about a year after I opened in 1980. She told me she had some collectible mysteries... END_OF_DOCUMENT_TOKEN_TO_BE_REPLACED