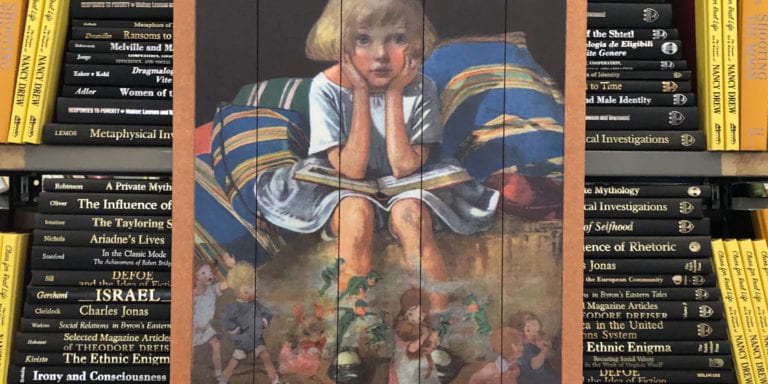 All suddenly the wind comes soft,
And Spring is here again;
And the hawthorn quickens with buds of green,
And my heart with buds of pain.

My heart all Winter lay so numb,
The earth so dead and frore,
That I never thought the Spring would come,
Or my heart wake any more.

But Winter’s broken and earth has woken,
And the small birds cry again;
And the hawthorn hedge puts forth its buds,
And my heart puts forth its pain.

A week ago was the first kiss of Spring. It was a surprise. 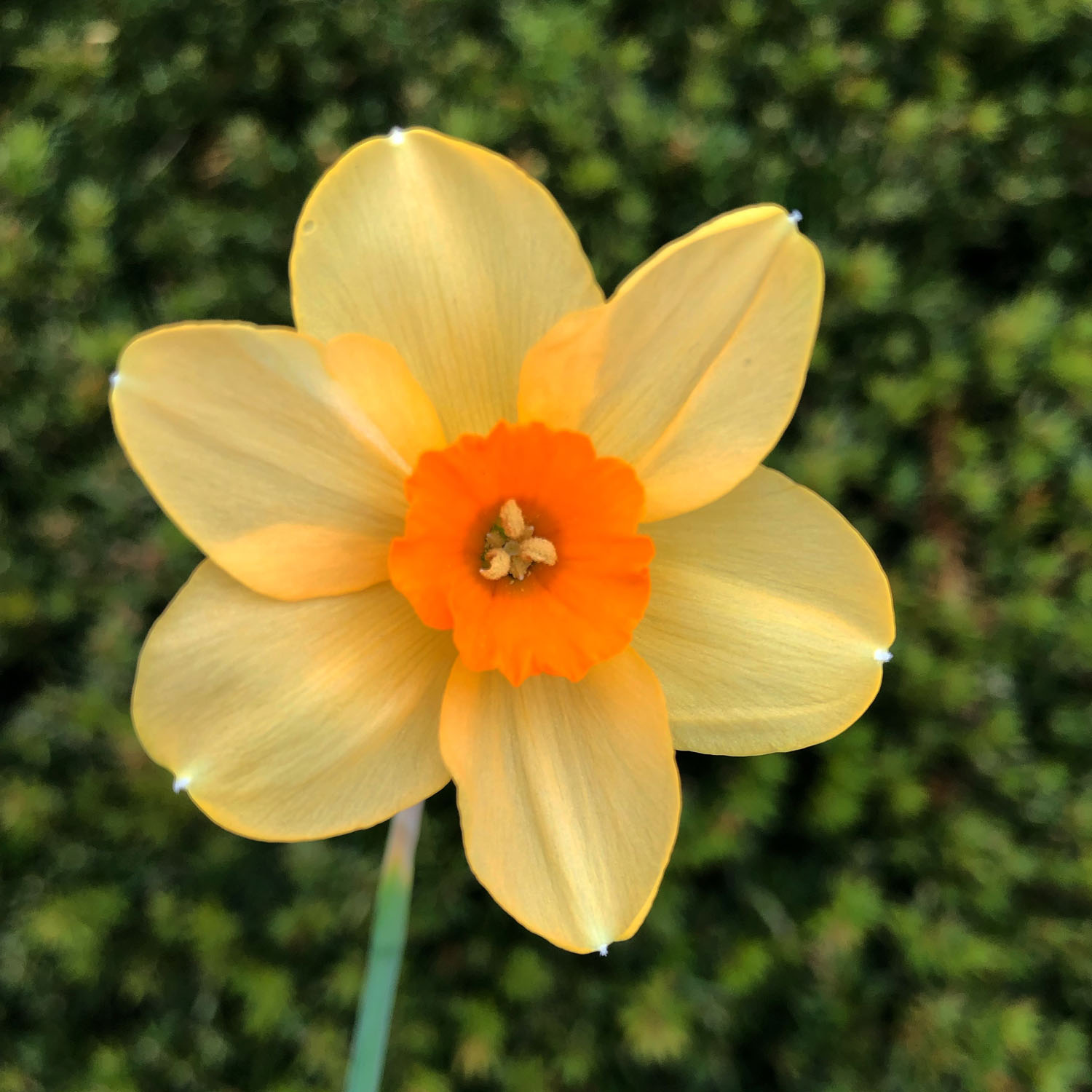 I have watched this Spring especially closely. I wanted to pay attention to each day’s progress. I wanted to be sure to savor its successions. I endeavored to record, in my mind, the slow overture. It was almost as if I somehow knew this Spring would be a first.

And here we are. It happened. And I am smiling for this first “First Spring.”

The mornings are in the 30s. The afternoons in the 60s. I have a fire at night. When I arise, there is no reason to stoke it for the day. Lately I’m burning wood from deadfalls near the house. If I burn those, I don’t have to stack them. If I use deadfalls, I don’t use stacked wood from the barn. Each day some boots, coats or gloves march downstairs to the cedar closet.

Last Sunday I sat upon the ground with my back against a south-facing wall. The night before I had attended the Lucia Micarelli concert at the Weinberg Theater. It was one of those evenings that change everything. She played pieces I had never heard of, and I thought myself versed in classical music. She performed Barber’s Adagio for Strings toward the end. When I walked out on the old streets of Frederick, Maryland, they felt new. Up the promenade along Carroll Creek and then across the pedestrian span. I had parked upon the far side. And that made all the difference.

Sitting out in the sun, I was warm and content for the first time…in a long time. I thought of all the books waiting in the building behind that wall. They wait. They are not lifeless objects. They wait. When you are ready, they will pour their dreams and truths and opinions into whoever chooses them. Your hands hold a gathering of leaves. You may start at any page you wish. The ink on the paper becomes words. The words form sense. Sense flows into your eyes and enters the vast theater beneath your temples. You live, learn, laugh or cry. The book gives all these things to you. It wants nothing in return. It will be there year after year. Waiting patiently upon a shelf.

In the week since Spring’s first, first kiss, the quiet overture has opened into the First Movement. Last night, Thursday, I experienced an early crescendo. Upon the mountain where I live, thousands of daffodils have opened. The “Early” Narcissus are building toward their peak. Over the next month and a half the Mid-season and Late Daffodils will have their time. Three movements to that flower’s annual symphony. The motif of that work is life from death. Color from dun dormant earth. Green and gold covering the land and then falling aside for the next performances of the cycle. 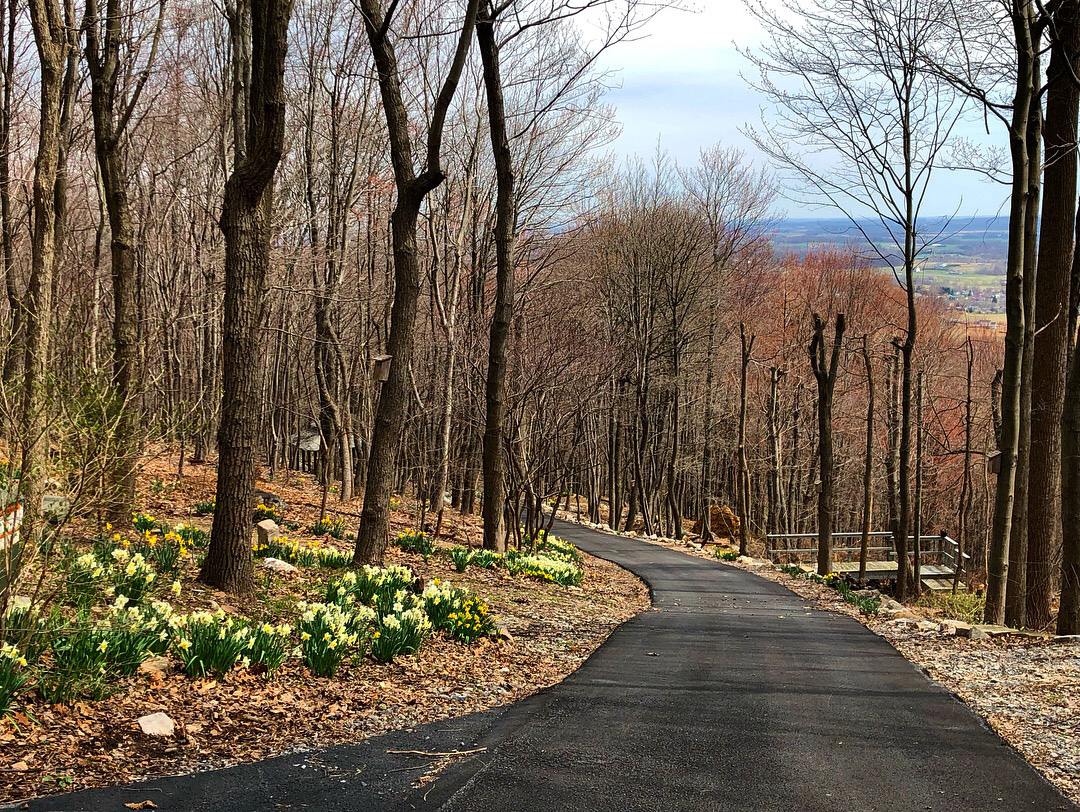 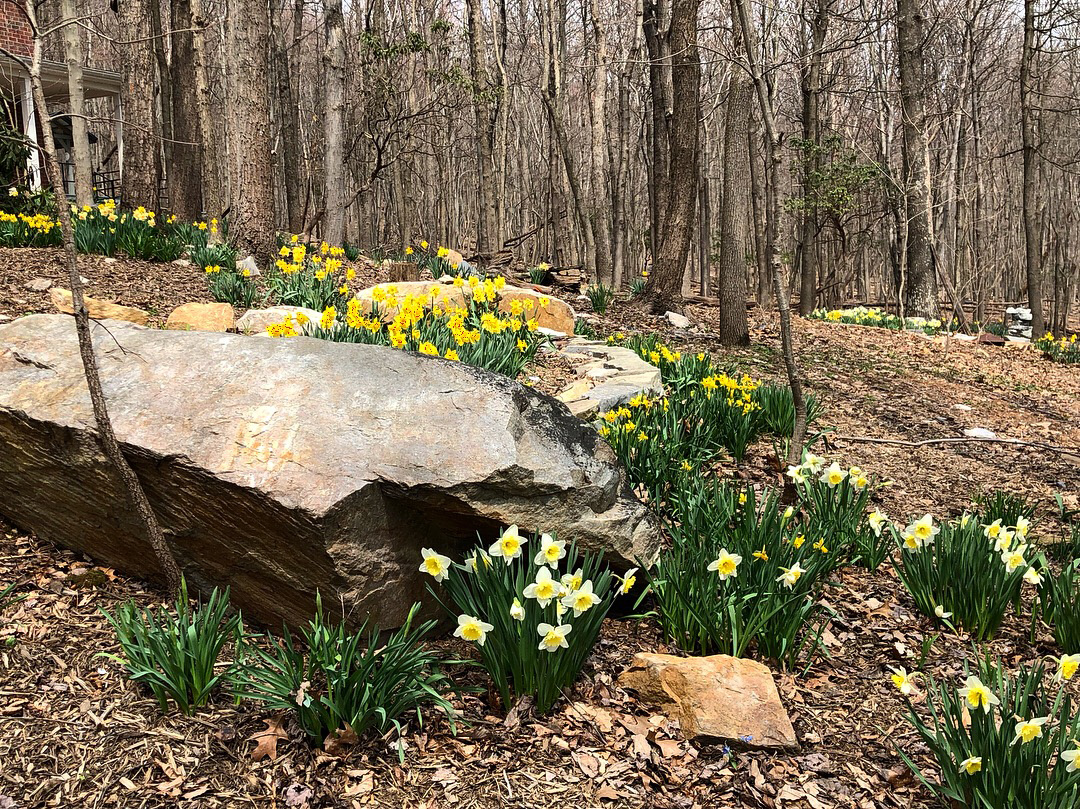 The Narcissus story is not a happy one:

Narcissus was a hunter in Greek mythology, son of the river god Cephissus and the nymph Liriope. He was a very beautiful young man, and many fell in love with him. However, he only showed them disdain and contempt. One day, while he was hunting in the woods, the Oread nymph Echo spotted him and immediately fell for him. When Narcissus sensed that someone was following him, Echo eventually revealed herself and tried to hug him. However, he pushed her off and told her not to disturb him. Echo, in despair, roamed around the woods for the rest of her life, and wilted away until all it remained of her was an echo sound.

Nemesis, the goddess of retribution and revenge, learned what had happened and decided to punish Narcissus for his behaviour. She led him to a pool; there, the man saw his reflection in the water and fell in love with it. Although he did not realise in the beginning that it was just a reflection, when he understood it, he fell in despair that his love could not materialise and committed suicide.

But he has given his name to something we can all look upon and love. The daffodil is not selfish or vain. It gives itself to any who pass by.

We can see, touch, hold, possess each bud. Sadly, they must wilt and fade in to memory.

However, these flowers are noted for returning year after year. They give themselves perennially.

Perhaps that is why I have watched this Spring so closely. So, when the season ends, when that time ends, I can close my eyes and recall that first kiss. I can replay the symphony in my mind and take comfort. There was, indeed, a first, first kiss this Spring.

I can hope there will be a Summer Symphony. And Autumn. And Winter.

I cannot see that far ahead. I can only watch this Spring evolve from day to day and savor its sweetness. And write part of this Spring’s story in my “book”—my memory.

And give a taste of it here in the beginning of this, the 100th book story.

One hundred stories. Thank you to those who have read and commented. I do not think I could have continued this long in a vacuum. The basic intent was to capture the times—now and the not too distant past. The books, readers, collectors, booksellers, friends, antagonists… that have come onto the stages I have stood upon…

…to capture time and memory and experience and emotion as books do.

Recording them has been as a lifeline to me. Adrift and at loose ends for a spell—now each Friday has become a goal, a duty, a “need.”

William Meredith once told me a writer must “need” to write. I studied with him for three years. That was many, many years ago. For my part, I am so glad the need finally possessed me in the summer of 2017. I hope you have enjoyed some of these true and not so true stories as well.

I hope the need does not abate. There are many old stories already written that are waiting to be tweaked and freshened and presented.

The week began with an new van. We buy so many books at our Gaithersburg store that the vans left there fill very fast. That often creates logistical problems down there and up here—in the massive Frederick warehouse. I made the “CEO” decision that two vans should be left down there.

Basic economic theory is the basis for values in the secondary book market.

The vans are for “supply.”

A rare book may not have much value if the demand for it is low or non-existent.

I purchased this book from an expert colleague last fall at the Boston ABAA Book Fair. It is a beauty and by a highly regarded author. It is signed by him. It is beautifully bound. Only 200 were produced. 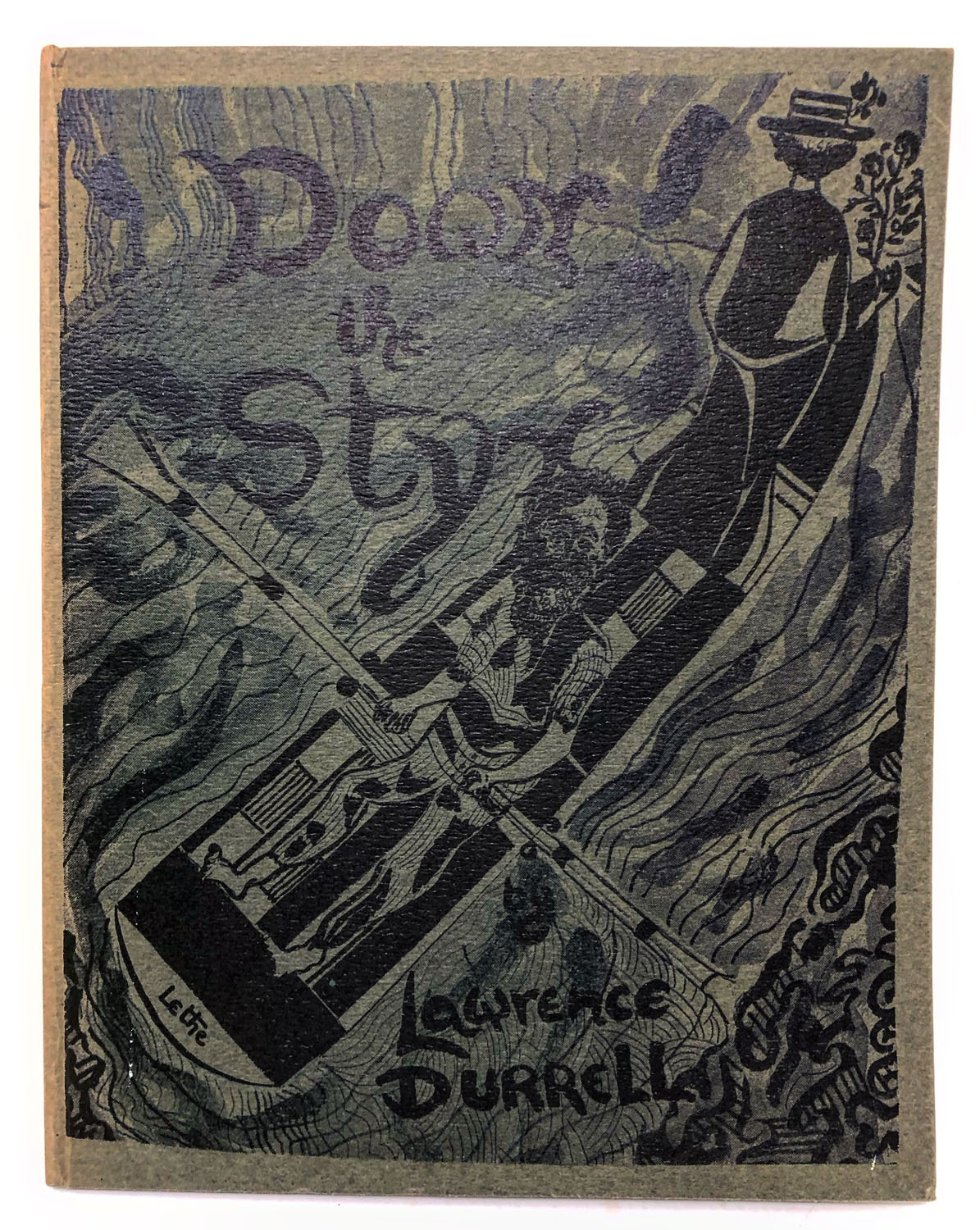 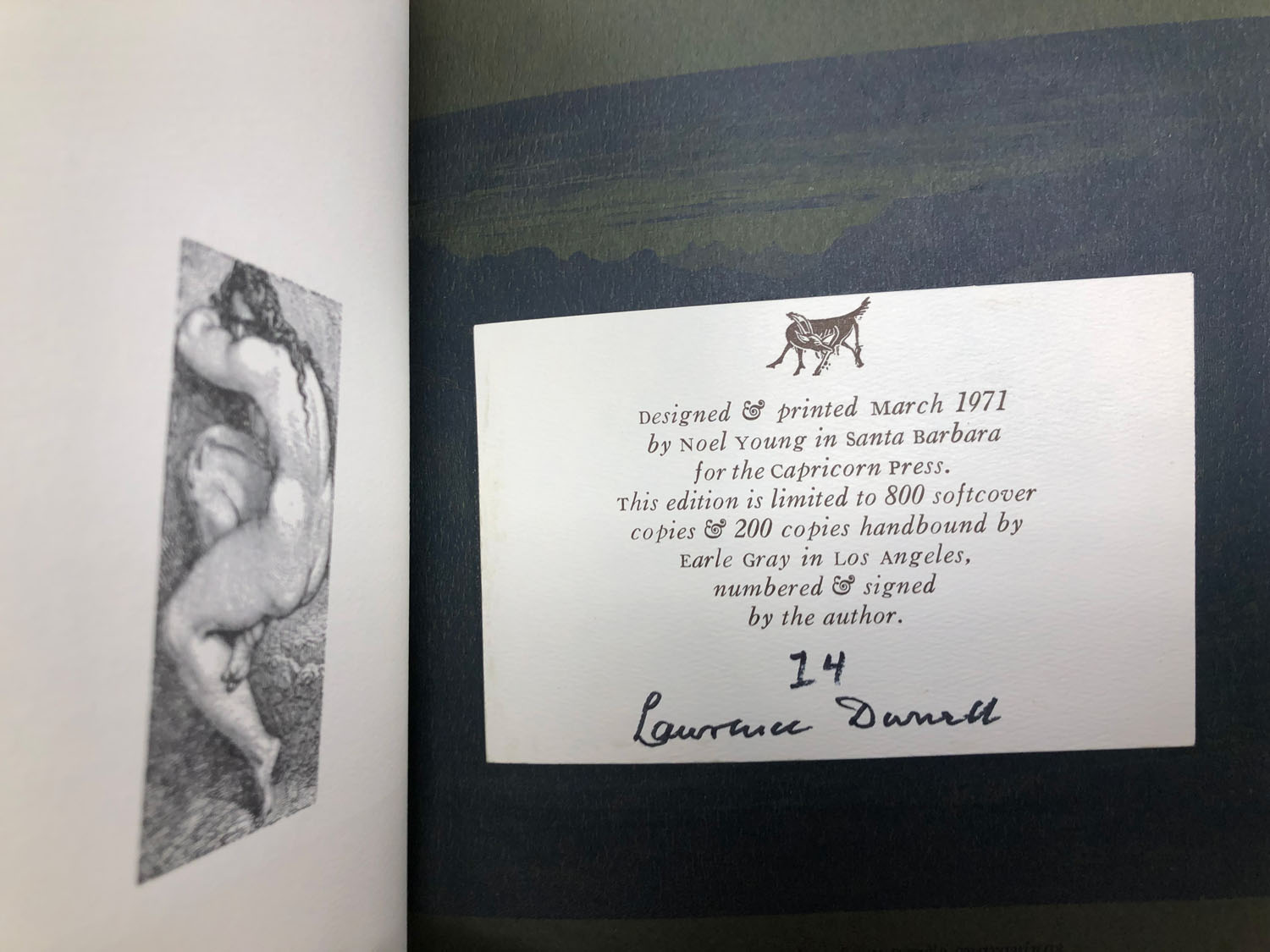 No one is willing to pay a hundred bucks for it? Would I have gone after it if it weren’t a “bargain”? Was it a bargain?

Someone’s collection of hyper-moderns arrived at the warehouse this week. Thirty-five lidded bankers boxes stacked upon a pallet. Each lid heavily taped, so I needed to fetch a box cutter to get to the books inside. They are from a charity sale. That is even sadder. There was no market for them—or at least this many of them at $5 each.

I had them staged on carts. 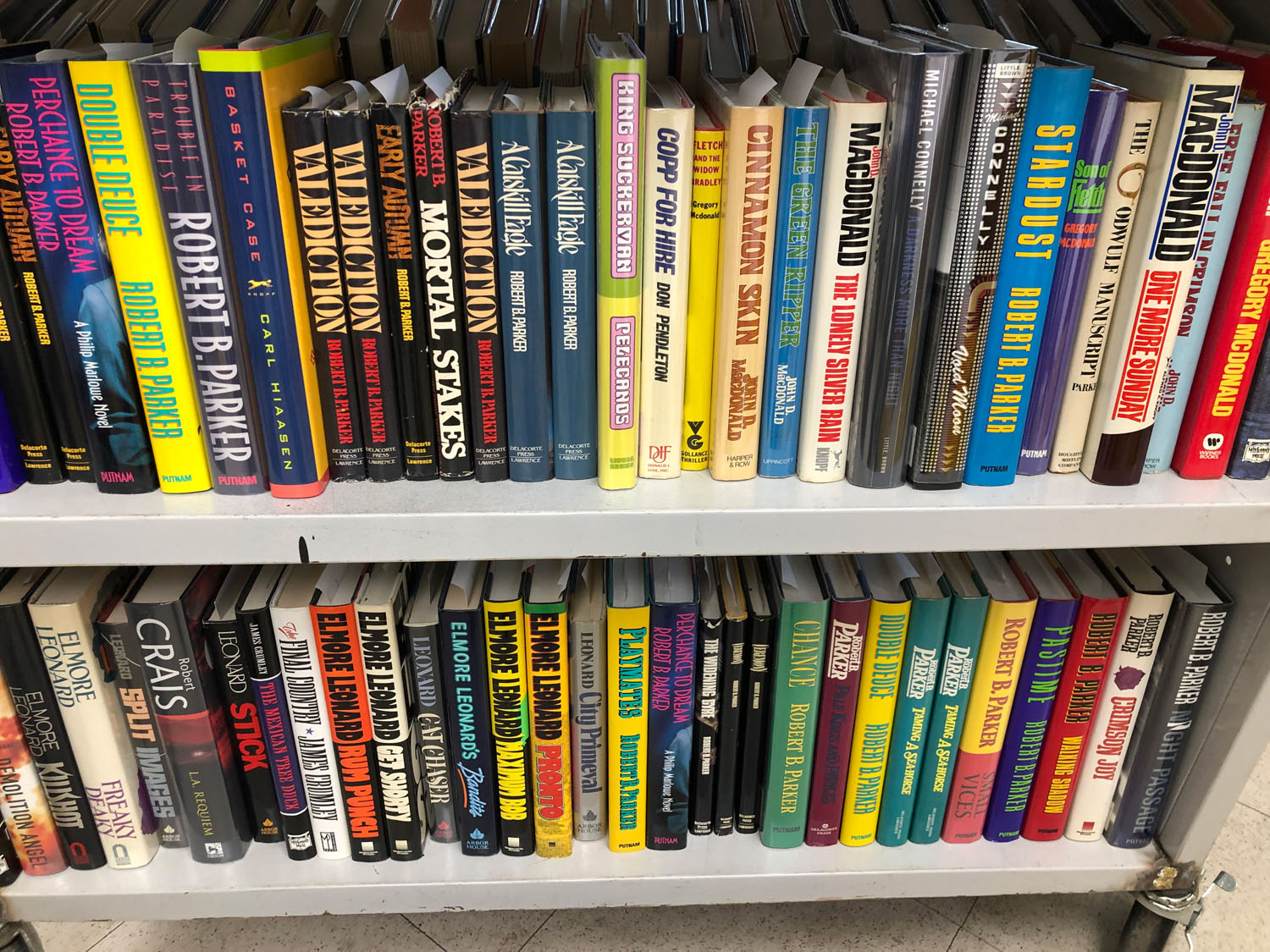 They were assigned to a data entry person whom I trust could be sure they were indeed first editions and, if they were signed, to find and note that in our online listings. 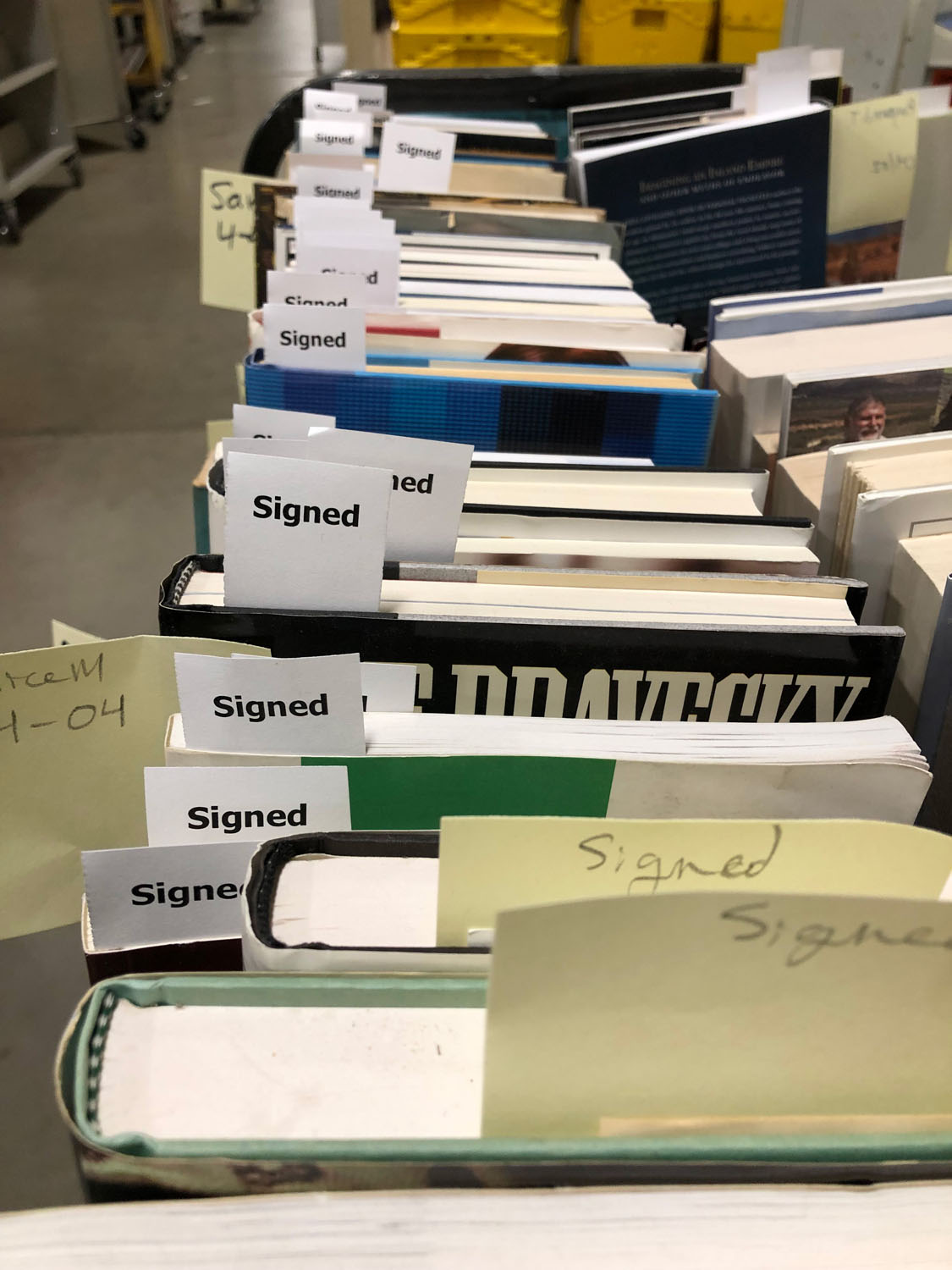 They were beautiful and shiny. The gloss of the mylar dust jacket protectors gave each book a polished feeling.

I noted bits of paper barely protruding from the top of almost every book. I began pulling them up. They were research notes. Someone had looked up “comps” on a selling site—likely www.abe.com. The range almost always started at “5.” $5 is our default price for common signed hyper-modern firsts. Is that a fair price? Much higher, and they languish here. Any lower, and we would lose money on handling and shipping. Maybe they were seeing our online prices.

Like it or not, they are five dollar books. 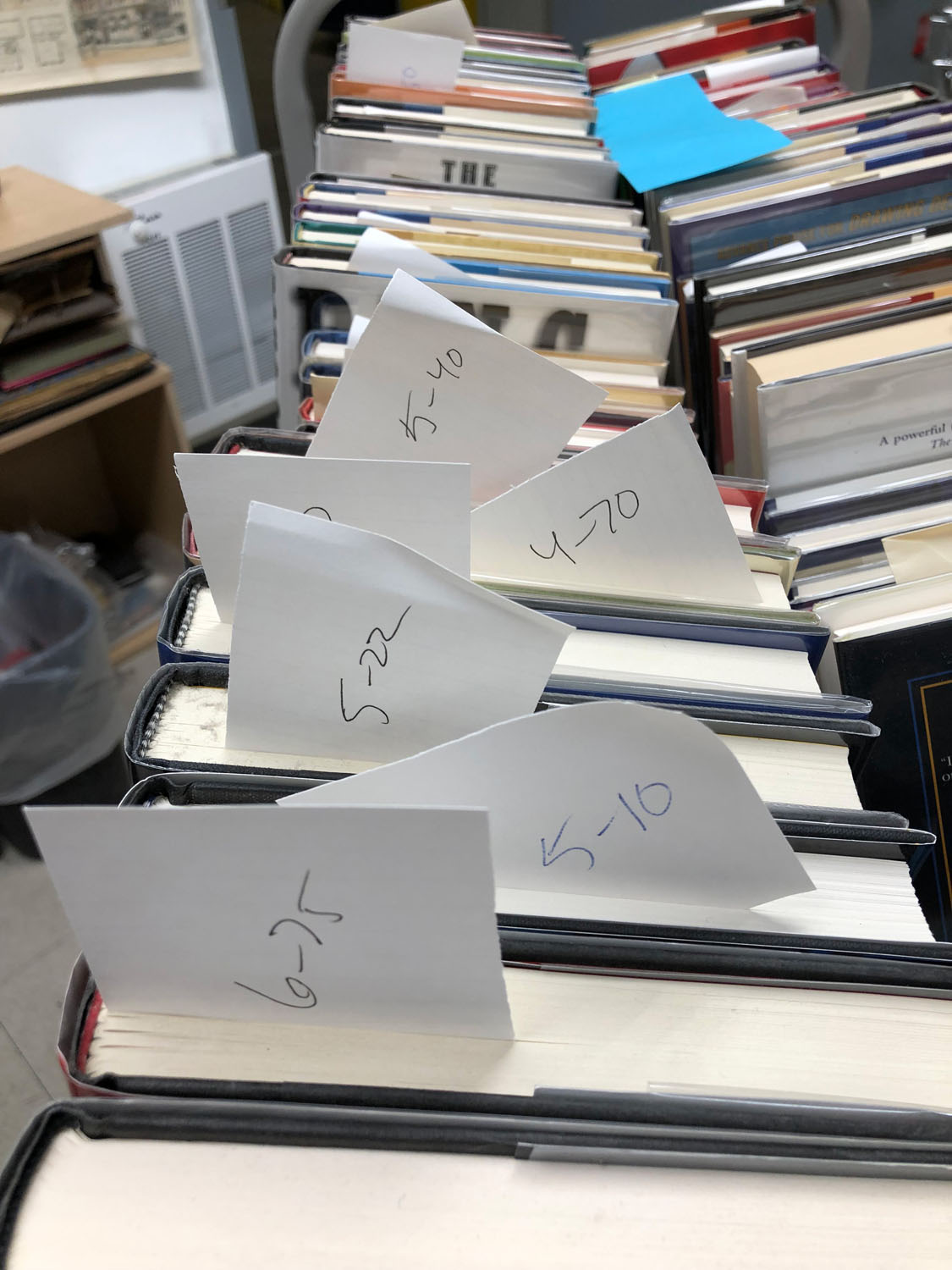 I collected a lot of these myself. I paid full retail price for many. I even subscribed to a few new bookstore programs. They would often have popular authors sign their new books while on tour. If I prepaid, they would get one signed for me. I recall getting James Lee Burke’s Robicheaux mysteries from the Lemuria bookstore in Jackson, Mississippi. When he began inserting his personal politics in the stories, I soon lost interest. Don’t hit me over the head with your dogma.

I let those books go long ago. They did not stand my personal “test of time.”

There were a lot of signed Burke books in this group. 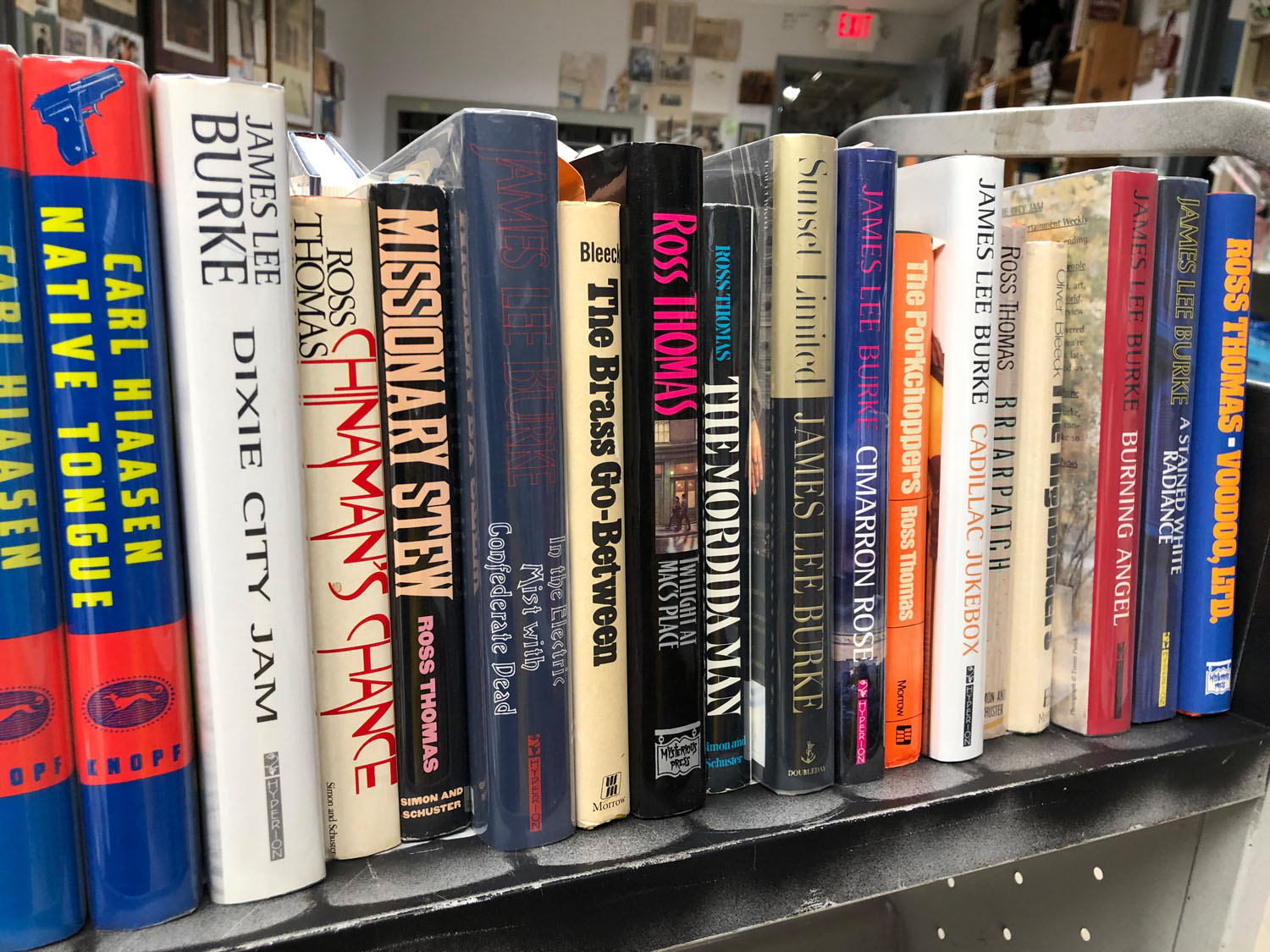 I collected Lawrence Block mysteries as well. Then he became dark and sometimes preachy. I stopped subscribing to his signed first editions from the now-defunct mystery bookstore in Bethesda, Maryland whose name escapes me. I still have the early bibliomysteries—the Bernie Rhodenbarr series. I suppose they still evoke the times when I was just starting to learn the book trade.

The season of the 9.5″ tall brightly jacketed mysteries and contemporary fiction with rows upon rows of shining spines has ended in almost every bookstore in the world. 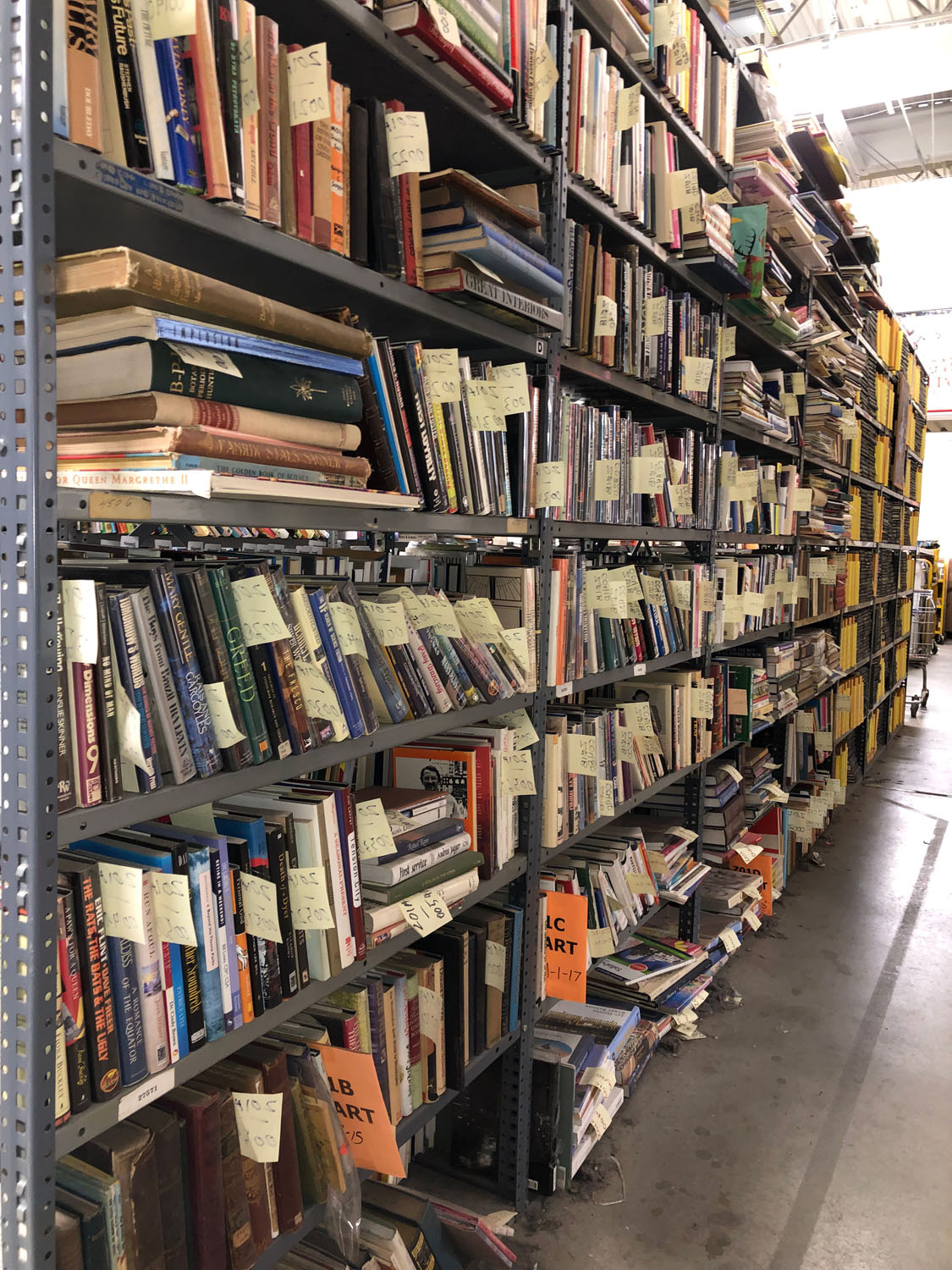 Most are about five bucks. Many are worth that—even unsigned. I would reread a few of these given light and time.

Now I mostly collect books I feel are “forever.” Some very old. Some quite new. Many of the books that used to speak to me are now mute.

They had their seasons and faded—to my heart anyway.

The second week of this Spring is ending. I am smiling. I have not smiled for several Springs. Before that, I cannot recall. The world was different then.

And if some things end with this Spring’s passing, if I will never cross that bridge again, I will always have that first first. Time cannot take that away. I can turn to that page anytime. If you pass by and catch me staring out and away, my eyes unfocused, well, perhaps I am rereading that passage. This Spring’s Story. Please do not interrupt. Wait until I return to this time and place.

Nothing can take that chapter away.

Death? I do not know. I hope not. I believe it will not.

But perhaps if indeed Death can take that away from me. It cannot destroy the story I have written in this “book.” Only neglect can affect that. Until then it will wait upon this “shelf” like any volume for you or someone yet unborn to discover in the vastness of cyberspace. And they will share this first, first kiss of Spring and the rest of this song. 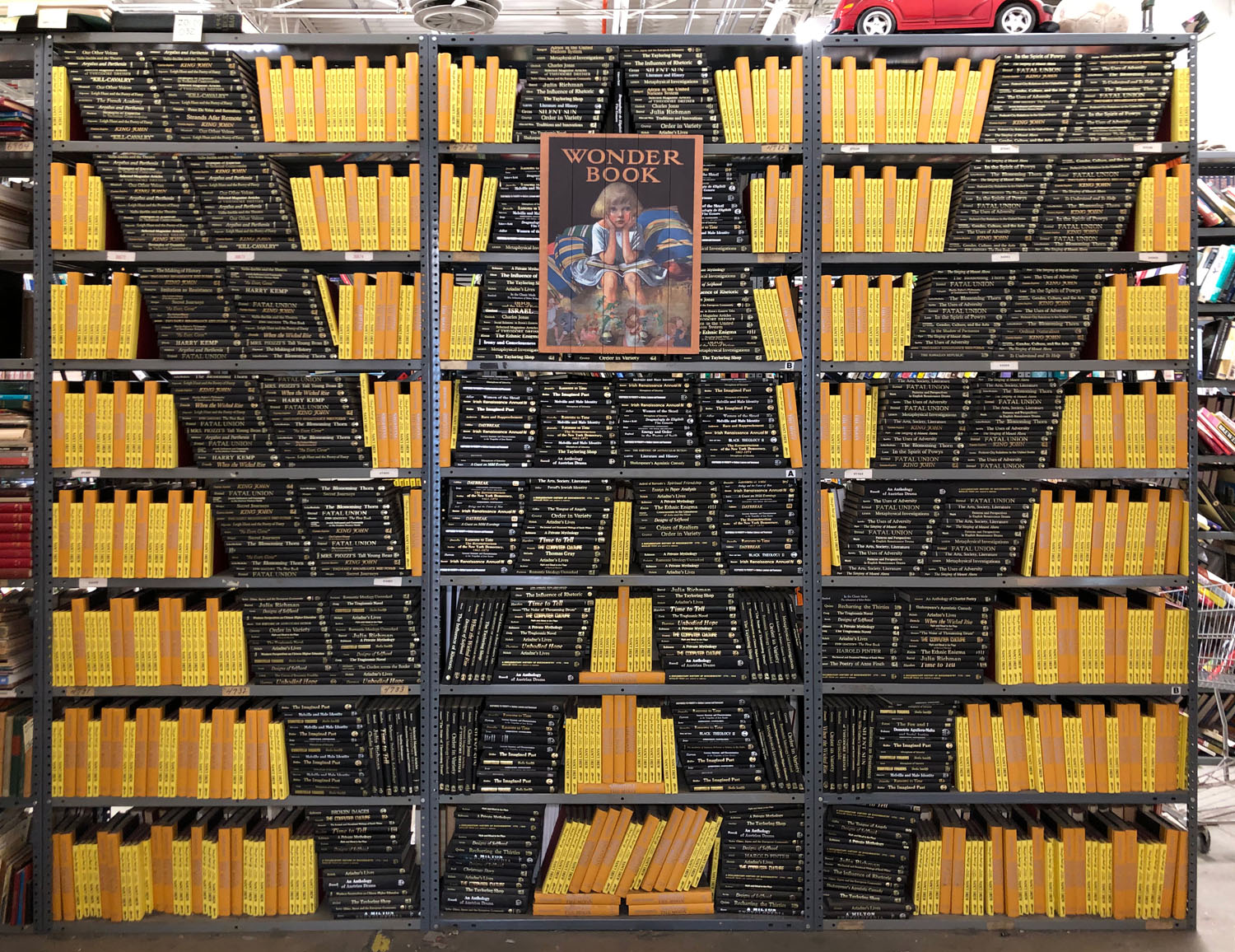 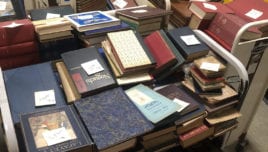 It is getting so long! Pulling a comb through the tangles every morning is a pain and painful... END_OF_DOCUMENT_TOKEN_TO_BE_REPLACED