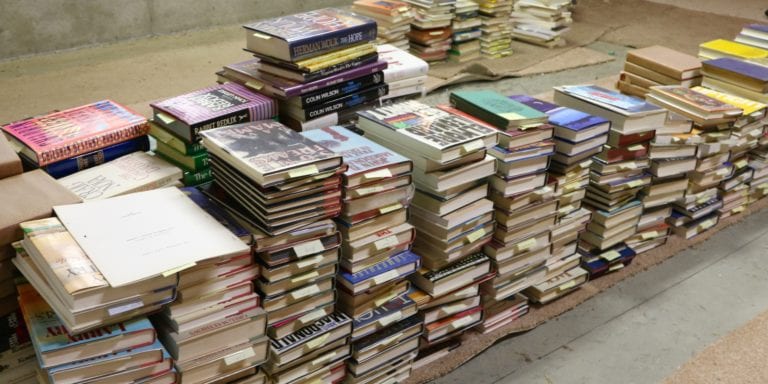 by Pat and Allen Ahearn

In 2006, the book trade including collectors, dealers, librarians and the book-scouts (what few are left) has changed radically with the introduction of the internet and the large search services. These changes have happened over just the last eight years.

We’ve been around the book trade for over 50 years now. We started as collectors in the 1950s, issued a few catalogs every year in the 1960s and early 1970s (under the name Allen Ahearn-First Editions), and opened the Quill & Brush as a book and art store in 1976.

Initially, our goal was not to make money but to support our own collection by selling duplicates or books we found on scouting expeditions. We achieved this goal — at least the part about not making any money.

Over the years that we’ve been associated with the book trade, it has gone through many changes. Gone are the great stocking-of-the-libraries days of the 1950s and 1960s when, we are told, a bookseller could go to huge bookstores in major cities with a wants lists from libraries and spend days accumulating books on the list, then go back to shop or home, mark them up, mail them to the institution, and go look for more.

By the 1970s, when we became more involved in the trade, not only were the great stocking-of-the-libraries days over but most of the large stores were gone. Locally, Lowdermilks in Washington closed at the end of the 1960s, and there was no successor. In most cases smaller shops moved into the area, but there was no longer a large central establishment. At present there are large bookstores, like Wonder Book, but except for those who won their own buildings, such as the Strand in New York City, most are located outside the large cities. The reason being that the rents in the cities or even in the close-in suburbs are unreasonable for large spaces.

In those days, and up until 1998 or so, catalogs were the primary means of selling to a far-flung clientele. Book fairs, which are a good way for booksellers to meet new collectors, existed, but the number per year were relatively small. During the 1970s and 1980s the number of fairs increased, so, by century’s end, we had gone from perhaps a few fairs a year to a few a week. Now, we see many of these fairs disappearing again as most of the smaller and part time dealers have the ability to reach a world market instantaneously over the net.

Over the past three decades, the book trade was slowly evolving, but nothing could have prepared us for the changes in the last eight years. The Internet has drastically and irrevocably changed the way we sell books and the way collectors and others book purchasers buy their books. Although the Internet has been around awhile (we have been on it with a home page since 1995), it was only in 1998/9 that the number of books on line increased dramatically. Books that previously may have taken years to track down could be located in an instant using the Internet. At the beginning of 1998, Advance Book Exchange (ABE) had 1,500 “dealers” or subscribers on line, listing a cumulative total of approximately 4,000,000 out-of-print books. By the middle of 1999, the numbers were up to 4,500 and 12,000,000, respectively. Now, we believe, they advertise 12,000 subscribers with about 70,000,000 books.

There is no doubt that the availability of so many books has reduced the prices of common books. In the far off past (1997) collectors and dealers book buying universe was defined by the catalogs received, the stocks in the local stores, and books seen in bookstores on visits to other towns or cities. Now, one can see almost the total availability of titles, as so many books are on the net.

Book prices are set by supply and demand. If the supply goes up drastically, as it has, prices have to be effected. So, if there are 200 copies in fine condition of a certain first edition and 200 later printings, book club editions and reading copies, the prices of these books will be priced less than comparable copies 10 years ago.

Of course, this represents a golden opportunity for the collector to buy collectible copies by the authors they like at a reasonable price. We know that there are so many copies of certain titles that it will be years before the prices go up. But we have noticed over the last six or seven years where there were 20 or 30 collectible copies in 2000, now there may be two or three. There may be 20 copies on line, but 18 will be reprints, ex-library or beat up copies without dust jackets. The other day we were looking for a Patrick O’Brian English first edition. Nice copies were in the $500 to $600 range. There were six copies on the net. None of them were in America. Three in the UK, two in Australia, one in New Zealand. We’re sure that if we had looked a few years ago we would have found many more copies available.

Nick Basbanes, in his book A Gentle Madness, called the late 19th Century and early Twentieth Century the Golden Age of book collecting, 60 years when the building of great libraries became an emblem of wisdom and accomplishment. We think that the current period will be looked back on in 10 years or so as the Golden Age when supply pushed the prices of good collectible books down and smart buyers took advantage of this to build good collections.

Of course, on the other hand, the net has shown that many books we had thought were relatively common, were actually not common, and the nice copies, initially listed of the net, were bought up during the first few years and now the prices for nice copies of these books are far above the prices in 2000 because there are few if any copies for sale.

The only thing we know for sure is that for fifty years we’ve been told that the first edition market will never hold up, and for almost that long we’ve been told that many of our books were priced too high. Can you imagine someone asking $100 for a first of The Catcher in the Rye! In fact, we know the first statement has not turned out to be true, as the first edition marketplace continues to be an active. As for the second comment, our prices may just be a little ahead of the time. We asked a fellow dealer at a fair recently if a certain book he had in his booth was really worth $2,500. He said, “Not yet.”

We in the modern first trade have a sense that the general antiquarian dealers don’t feel we’re real antiquarians. We’re a little sensitive about this. We ourselves thought we understood the term, and when asked to define the difference between an antiquarian book and a modern first edition we always used the example of a Churchill first edition, perhaps My Early Life published in 1930. If it is a very nice copy in the original cloth in a fine dustwrapper it would be considered a modern first edition, but if the dustwrapper was missing and the book was pretty beat up, or if the covers were gone and it was bound in full leather, we understood it to be an antiquarian book. We understand eighteenth-century-and-earlier books as being antiquarian and assume if we sell a Dickens, Melville, or Twain that maybe we are dabbling in the antiquarian world. But what of a Jack London first, particularly in a dustwrapper. It’s quite old, a hundred years now. Is it an antiquarian book, or is to be forever a modern first edition? Are Hemingway, Faulkner, Fitzgerald, and Steinbeck forever to be “modern”? They’ve lasted as “modern” throughout almost the whole of the twentieth century. Will they be able to hold on to the title throughout all of the twenty-first Century? And what of those recent books, published in the last few decades of the twentieth century? Are they all a century old now?

Well, somehow we will continue, the buyers and sellers. But the collector should try to buy the best copy available and either buy signed or inscribed copies or go to a book signing and get the author to sign your books, because the signed copies, even of common books will always their value better than unsigned copies.

Good luck and good books to you.

Pat and Allen Ahearn became booksellers in 1962, specializing in first editions, a specialty that continues today. The Quill & Brush (named for our initial focus on books and art) was started in 1976. Allen’s own first book, The Book of First Books, was published in 1975 and revised in 1978, 1983, and 1986. G.P. Putnam’s Sons first published a revised and expanded edition of the book as Book Collecting: A Comprehensive Guide in 1989 and, in 1995, published a revised and updated edition with Pat joining as coauthor. 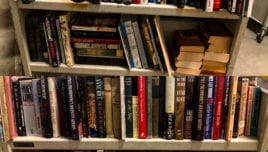 WELL! It has been quite a week! "Don't let the bastards get you down." I received versions of this... END_OF_DOCUMENT_TOKEN_TO_BE_REPLACED