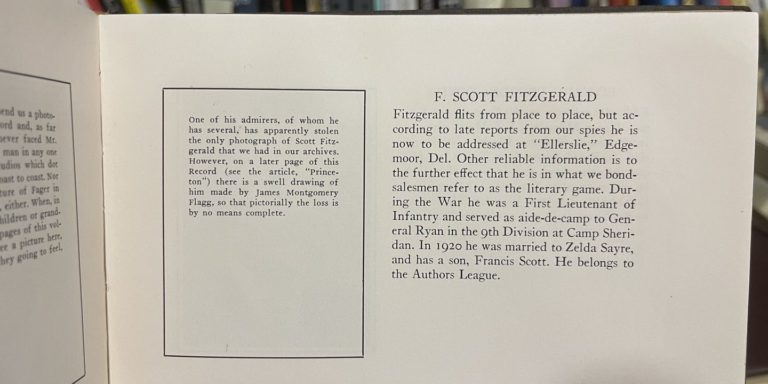 If I could go back in time, what bookstores would I visit?

Growing up in the (then) bleak suburbia of Rockville, Maryland, there weren’t many choices.

As my parents weren’t frequent travelers or bookstore seekers, I wasn’t exposed to big city stores or more exotic locations.

Most of the books of my youth came as gifts from my three older brothers. I also appropriated books from their rooms when they went away to college. (I can confess this now as the last brother passed away last April 15th.)

Some vintage shops would be too exotic for my tastes. To go back to Sylvia Beach’s Shakespeare and Co in the 1920s would be a bit intimidating. I was at the current location the week Notre Dame burned. That is not Beach’s shop, however. Her store was elsewhere on the Left Bank and closed in 1941.

I see “Shakespeare and Company Kilometer Zero Paris” rubber-stamped on endpapers fairly often. That mark is in lieu of real bookseller ticket. Actually, a bookseller ticket is more like a “stamp” than anything else.

What is Kilometer Zero? In Paris, it is this: https://en.wikipedia.org/wiki/Kilometre_zero

What about the Gotham Book Mart—another woman owned and run icon?

There have always been a lot of great female booksellers in my experience. As a young bookseller, the book shows I attended were very well represented by woman booksellers—was it 50%? Was it because the book trade was more welcoming than others? One thing I’ve always noted, women were not crazy as male booksellers so often are. (Present narrator’s excluded?) I wonder what the ratio of women vs. male booksellers is now in the various trade organizations?

Be Not Inhospitable to Strangers Lest They Be Angels in Disguise

Is telling. I’ve never been the victim of the “crank” bookseller in any woman’s bookshop or show booth.

Well, the book trade is open to anyone. You can still start your career on a blanket on a sidewalk. What other trade can boast that?

An iconic (and crazy) high school English teacher took our small class of “creatives” (I think the experimental course was actually called “Humanities.”) to the legendary Saville Bookstore in Georgetown. He was a tiny very skinny man with a ginger goatee and very long fingers which were often around his nose. In a statement of some of the fashions of the times, he frequently wore a sweater suit. Flowing brown knit pants and a matching “jacket” that hung loosely to his knees. He would usually sit on a high stool and talk down to us. But I was very lucky to have him as a teacher. He introduced me to many of the arts I may not have otherwise discovered until much later in life. Opera. Old movies. He was a Garbo fan and would often screen silent films in class on Saturday nights. Maybe we stopped at the Georgetown shop when he took our class downtown to see a ballet or Leopold Stokowski at the Kennedy Center. THAT was my introduction to a “real” bookstore. Prior to that, it was Waldenbooks in the mall or the paperbacks on the metal wire spinner rack at the drug store… It was a stretch for a highschool kid to get down to Saville from Rockville.

Prior to that, most of my books came in the mail via the Scholastic Book Club in elementary school. The teacher would hand out a catalog to each of us. I would study it meticulously and tick off many, if not most, of the books on the order form. (I guess I had the “book addiction” from an early age.) My parents were very generous indulging my affliction, but they would usually ask me to scale back the orders a bit.

I think the bookseller tickets* I most frequently see stuck inside older books are in books purchased from the Old Corner Bookstore in Boston. It must have been quite the hub for Boston literati and tourists visiting the revolutionary heart of Boston. It is still there—sort of. But the Chipotle that occupies it now (I think) doesn’t offer any books. It would be fun to see it in the 1920s with the tables stacked, and the shelves packed with the short fat octavos that were the standard then. I can dreamily imagine all the pristine colorful dust jackets illuminating the place.

* Bookseller tickets: A sticker placed in a book to identify the store that offered the book for sale.
https://www.ioba.org/book-terms/bookseller’s-ticket

Perhaps the bookstore I would first visit in time travel would be Goodspeed’s—probably in the 1920s as well. Money flowed then. As did booze and some exquisite literary output.

Anything That’s a Book

That has always resonated with me. Before I ever heard of Goodspeed’s, that was my bookselling mantra. I respected all my customers, whether they were buying 25-cent comic books or series romances at 3 for $1 or my “better” books—often over $10!

I could always hope that buyers would evolve—much as I did from Scholastic Book Club paperbacks and comic books to the sort of things I’ve fallen in love with over the years—once I discovered they existed and could be bought!

And I desperately needed lots of quarters and dollar bills to pay the rent and buy more books to sell! I wouldn’t turn any book away. Nor would I turn anyone’s spare change away.

Goodspeed’s Book Shop opened in 1898 at Beacon and Somerset streets in Boston, Massachusetts. Opened by Charles Eliot Goodspeed, the shop quickly became well known for its carefully curated selection of books, prints, autographs, and maps. The logo on their sign, which featured a monk reading a breviary and the words “Anything that’s a book,” became an icon. In 1925, George Talbot Goodspeed graduated from Harvard and joined his father at the family business. After the elder Goodspeed passed away, his son managed the shop. In 1995, at the age of 93, George Goodspeed closed the storefront, with the intention of moving to online sales at a much-reduced rate. Goodspeed died in 1997, signaling the end of an era.

During its years of bookselling, Goodspeeds made its reputation by acquiring American literature; the first children’s book printed in America was among their purchases. The Goodspeeds were also among the first to recognize the importance of Audubon’s natural history prints and to anticipate the growing popularity of genealogy studies. George Goodspeed’s memoirs, The Bookseller’s Apprentice, published in 1996, recount the best stories of his life as a renowned bookseller.

This humble book got me thinking of this. 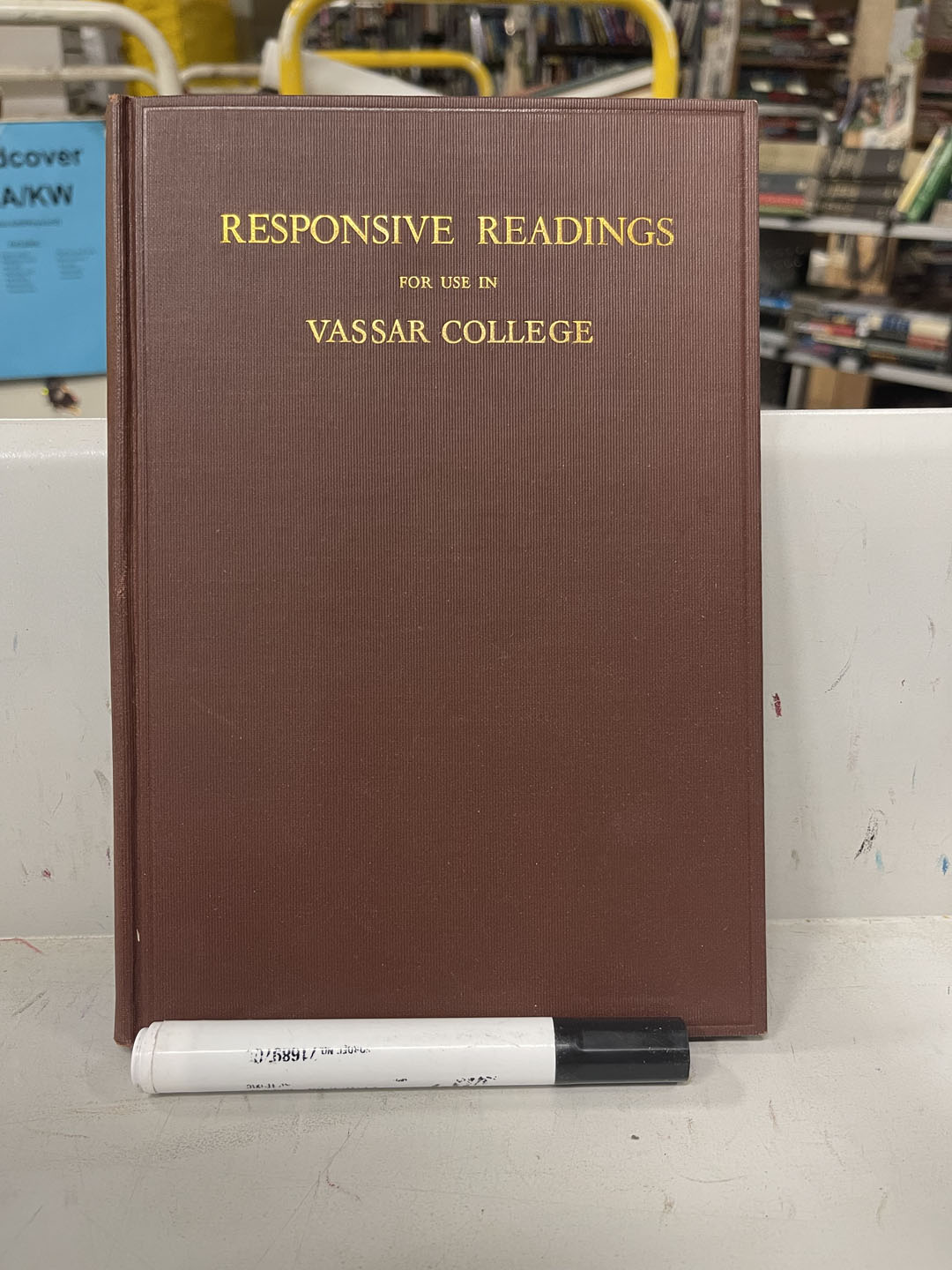 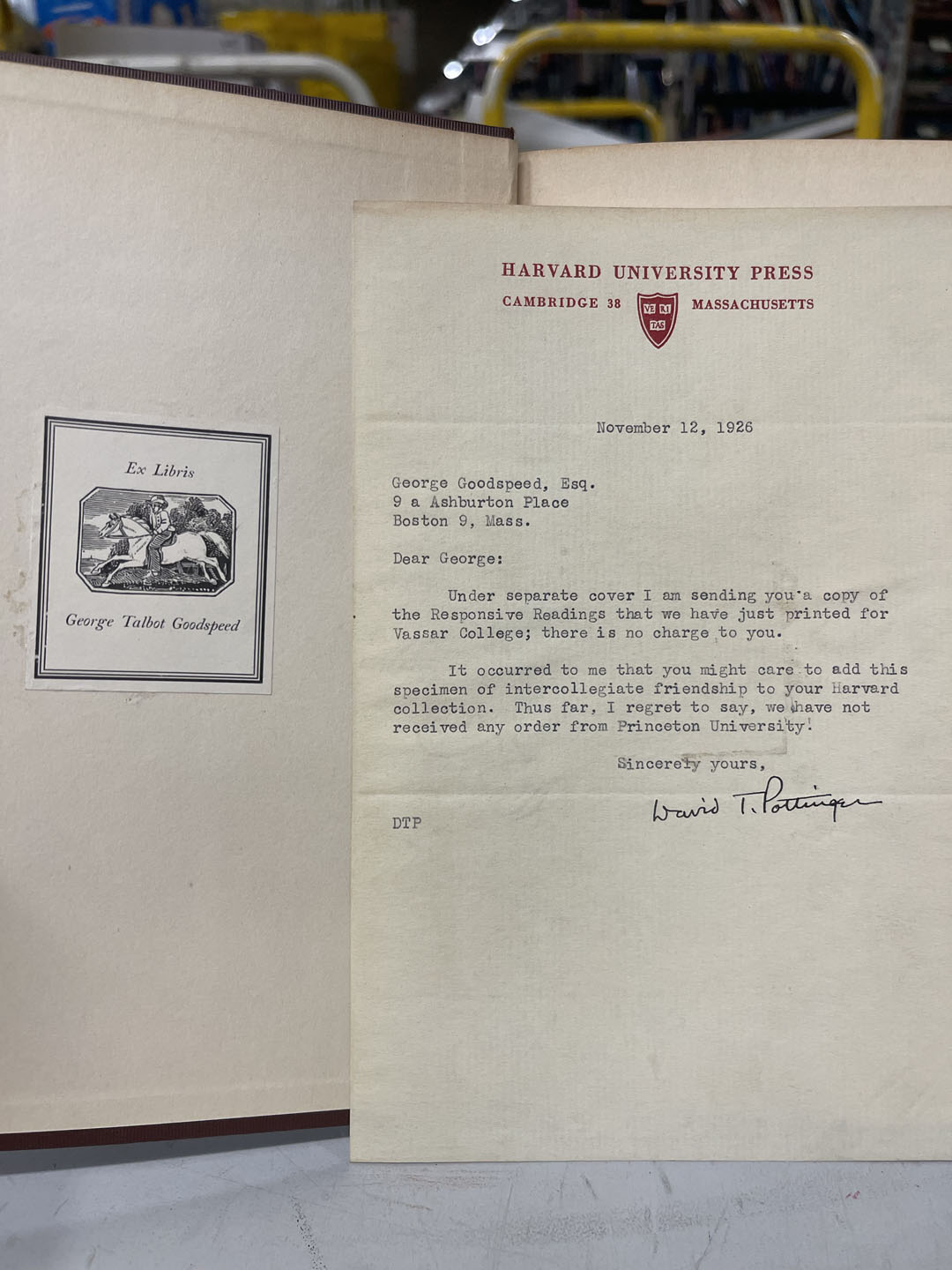 Why I opened the book to look inside—I have no idea. There couldn’t be anything of interest or value in a Vassar lower level English textbook. I can’t open every book I handle. Not even a notable fraction of them. But I did. And there was a bit of bookselling history inside.

A letter from the David Pottinger* of the Harvard University Press to George in 1926 gifting him the humble book to add to his personal Harvard collection. And Goodspeed’s bookplate neatly affixed to the center of the front pastedown.

Another time traveling book that took me along with it on its journey for a little while.

I do usually look inside books with unreadable spines or, as in this case, no spine at all. 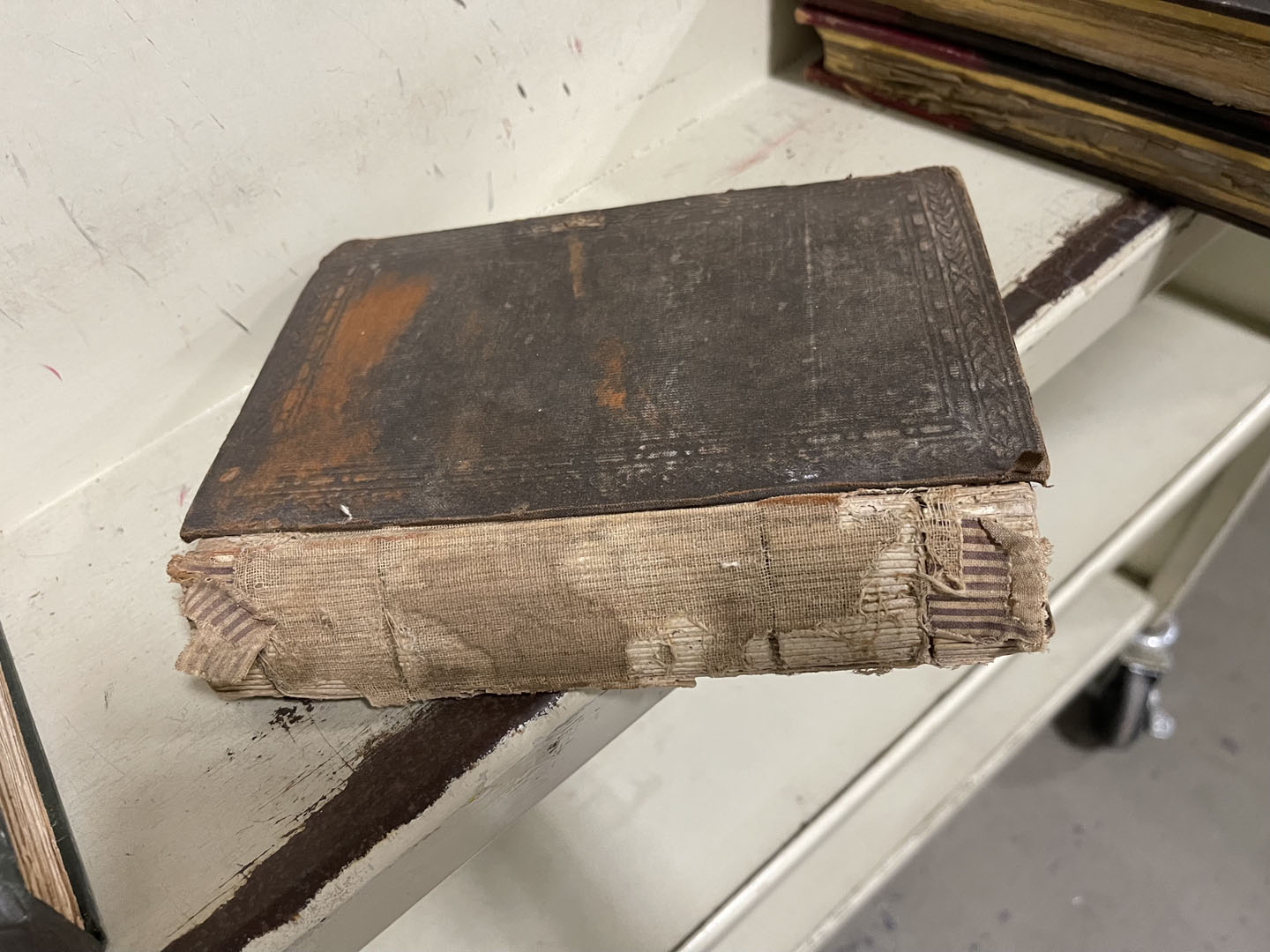 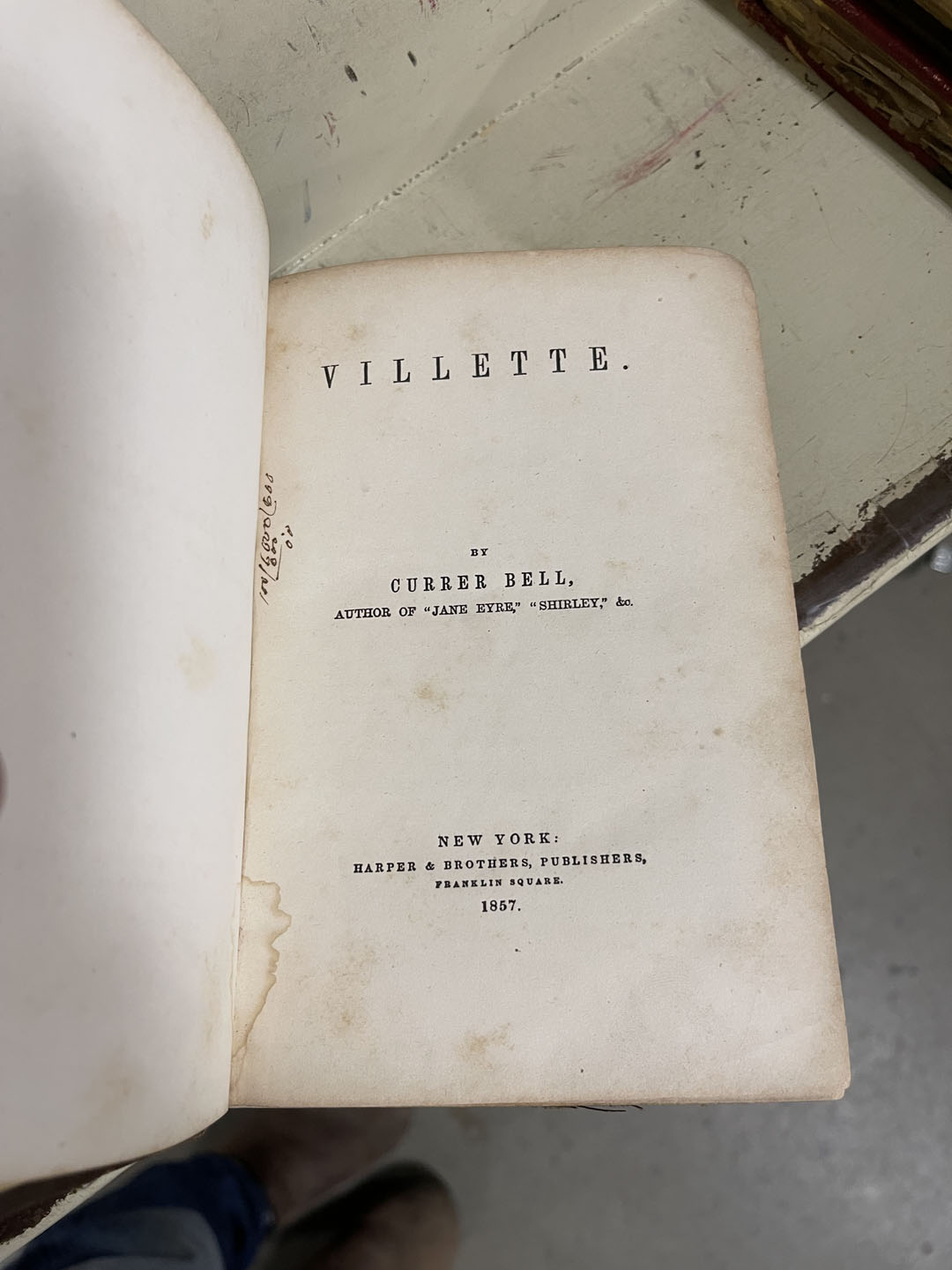 Who was Currer Bell? I’m sure 95% of you reading know this already. (Figuring if I have 20 readers, 1 isn’t aware she is Charlotte Bronte.)

Larry also brought in what he says is the last of the Ivy League (and other top schools) yearbook hoarder. Her collection was unceremoniously dumped in a damp garage while the house is being fixed up for sale.

Yearbooks are notoriously hard to sell. I’ve never understood why. They are, by definition, small print-run limited editions (except in larger universities.) Most are full of local ads. The hairstyles of different eras alone are fascinating.

I gave my older son a few of the early 20th century Columbia and Stanford yearbooks—his alma maters. So far he hasn’t returned them.

In this lot, I noticed the Tenth Anniversary of the Princeton Class of 1917. Sure enough, F Scott Fitzgerald is listed in it. No photo, though. Someone stole it from the Princeton archives! Imagine that! The text mentions his “son” Scott—who was actually a daughter—Scottie. 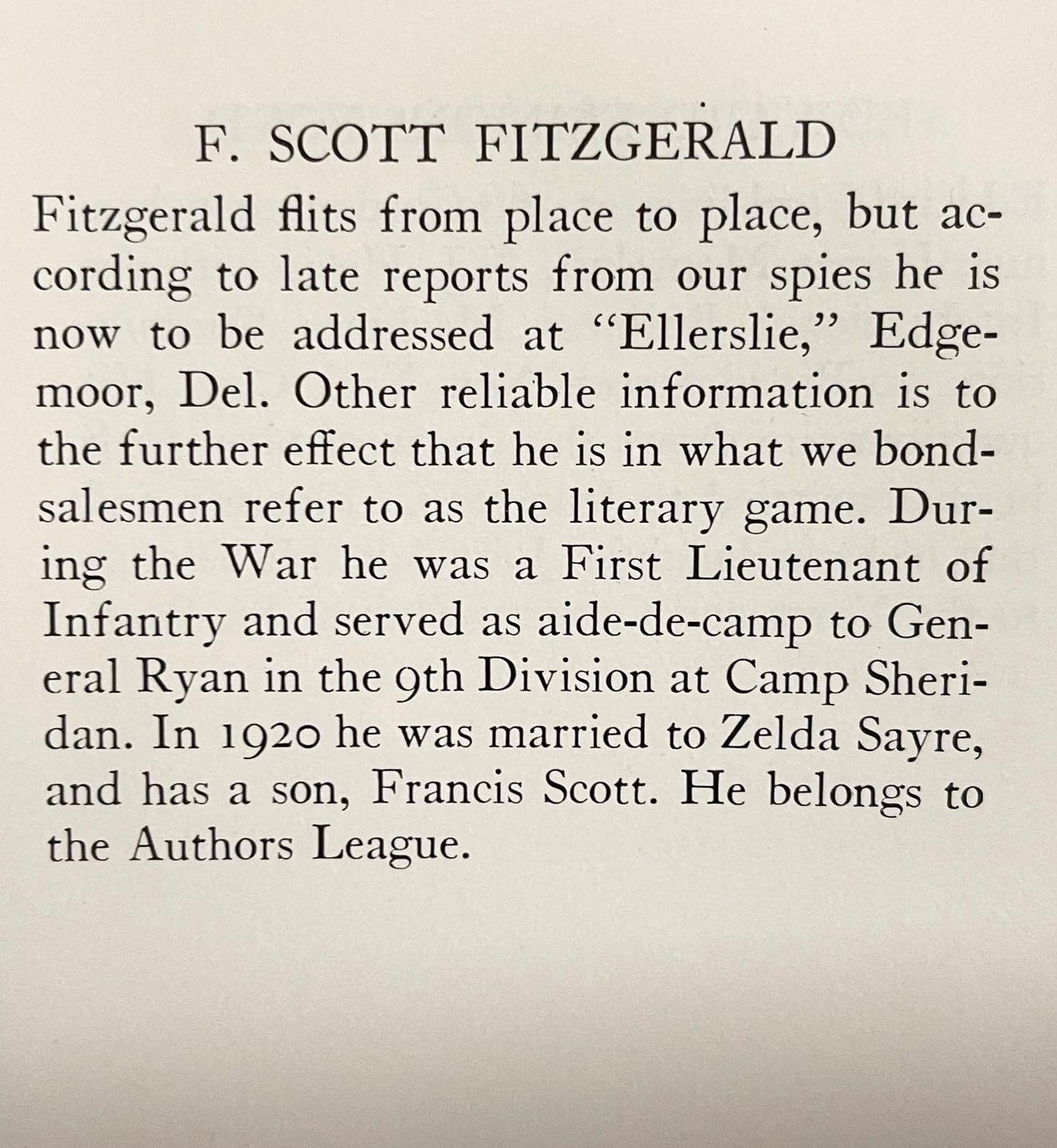 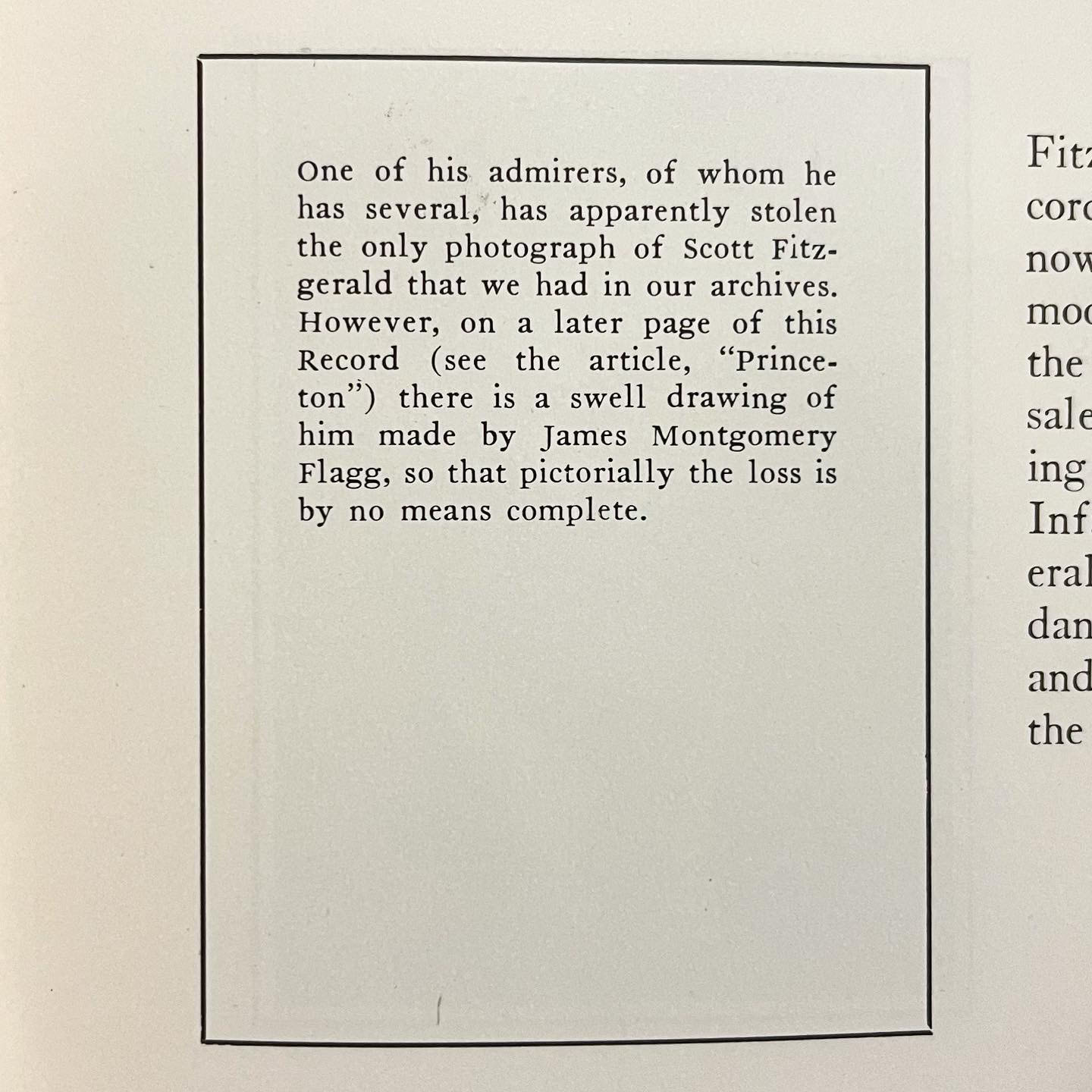 An easy mistake, I suppose. There was no instant knowledge a la Wikipedia et al. And it was, after all, the Jazz Age, and who cared about the details?

The text also hints there is more Fitzgerald in this book. I had to flip through it to find “Princeton”—a multi-page essay by F Scott Fitzgerald and a drawing of the man by James Montgomery Flagg.

Fitzgerald, Zelda and Scottie were all buried in Rockville, Maryland where I was also “buried” for many years.

He also spent a decade growing up in Buffalo, New York. I was born and spent my first 13 years there.

Sadly, I didn’t go to Princeton. Perhaps that would have made all the difference.

We got another request for books for a movie set. I can’t tell you the name yet but 99% of you would recognize the title. They need 25 linear feet of books pre-1975 for a man’s apartment:

he’s a man in his 60’s??
[xxxxxxxx] is the actor’s name.
He teaches English.
He loves fly-fishing and tying lures.
He was in the Navy and he reads a lot about vampires!!

The weekend involved more carts than usual for me.

These are the herd of bad carts in the northeast corner of the 3-acre warehouse: 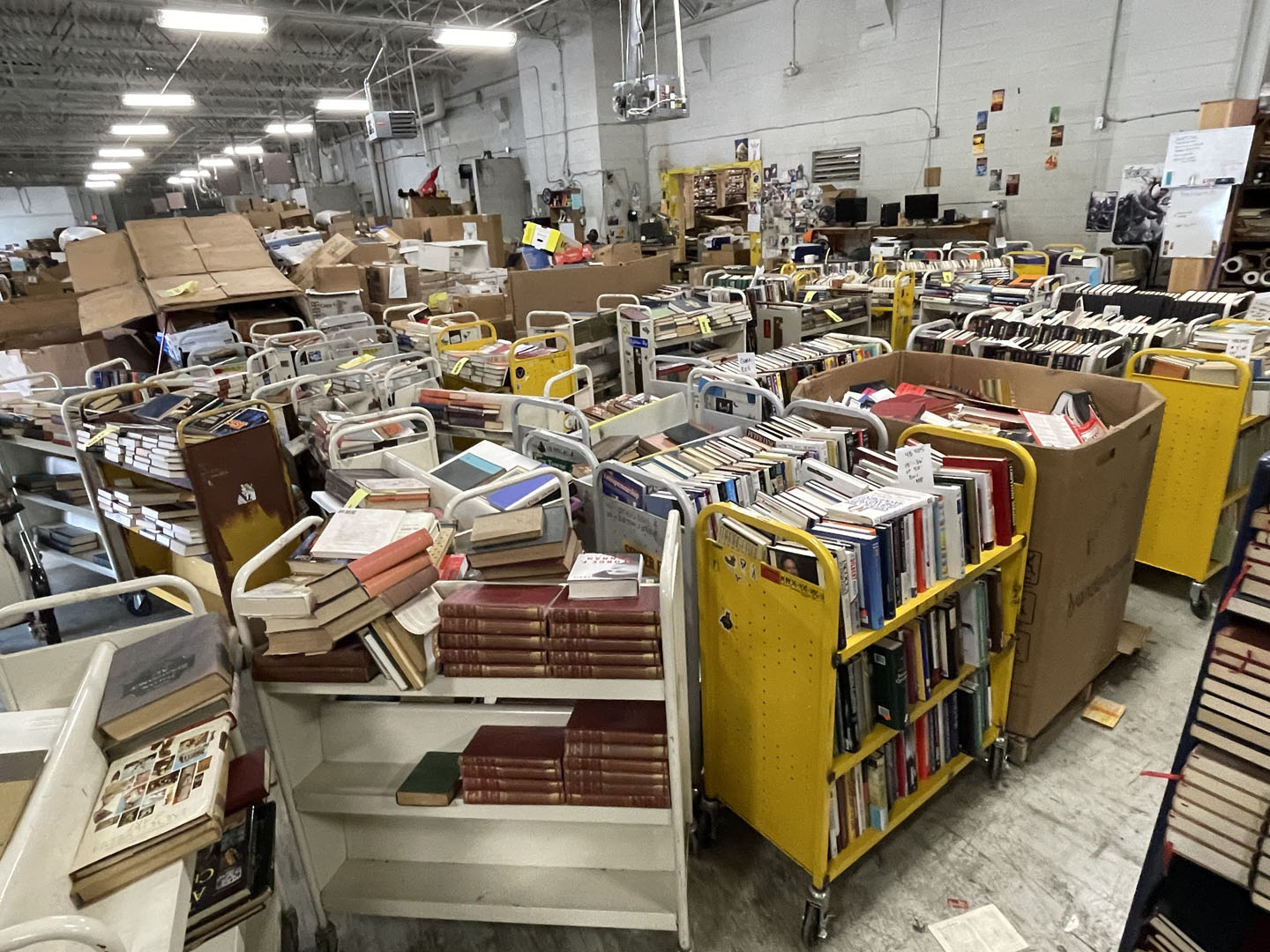 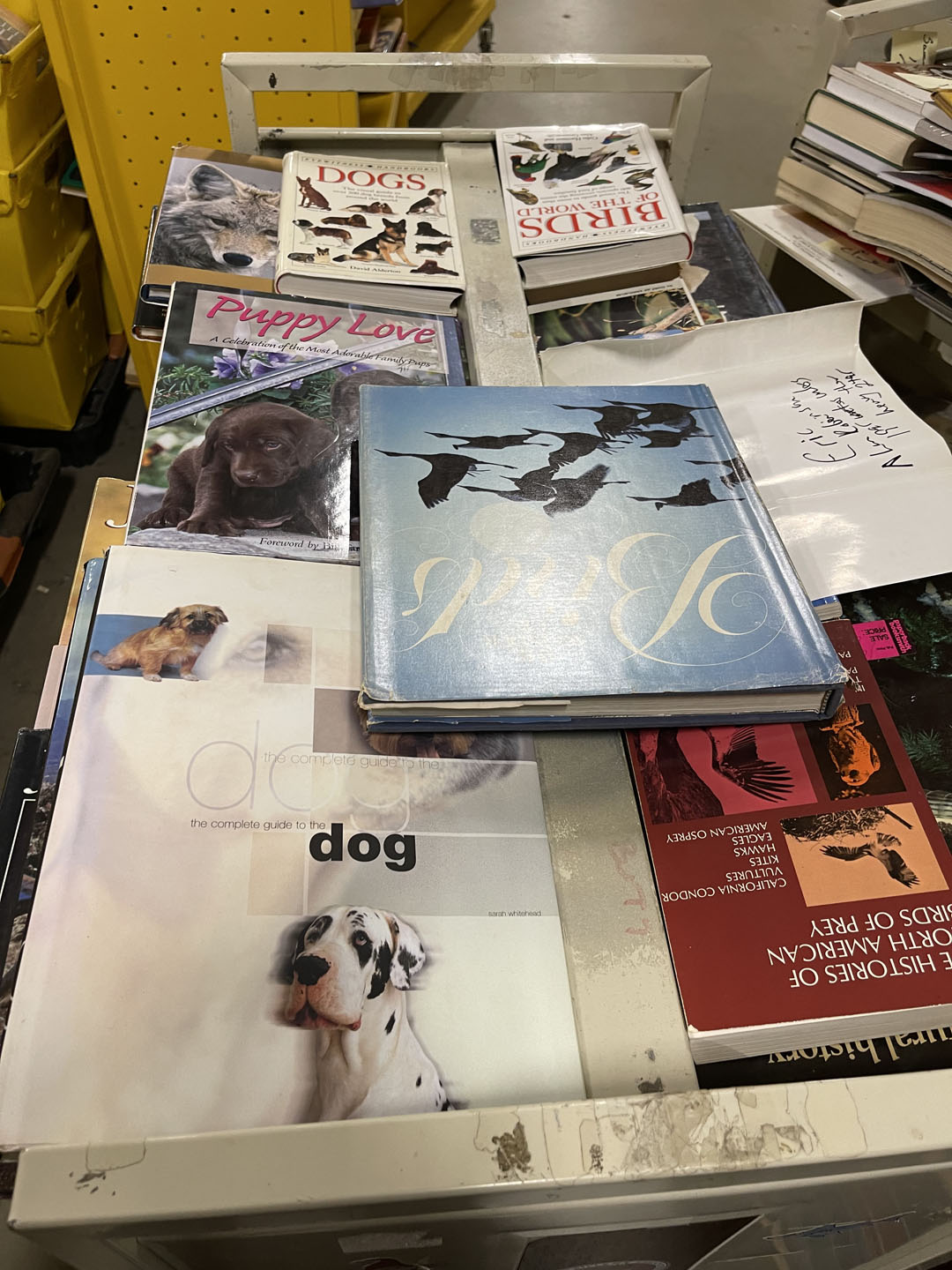 Suitable only for Books by the Foot.

This is a herd of good carts in the southwest part of the building:

These will be added to our online inventory. Most in our Collector’s Corner feature.

The week flew by. I had to do so many things I didn’t want to.

Finding exotic data for the accountant… other things too tedious to bore you with.

Today, I’ll meet with the architect and contractor about design ideas for the new warehouses.

I kind of like this warehouse building nearby. Current trends are for VERY high ceilings. We are looking at 30 feet or more. Maybe we will promote the 2—52,000 square foot buildings’ “cubic feet” as an enticement. 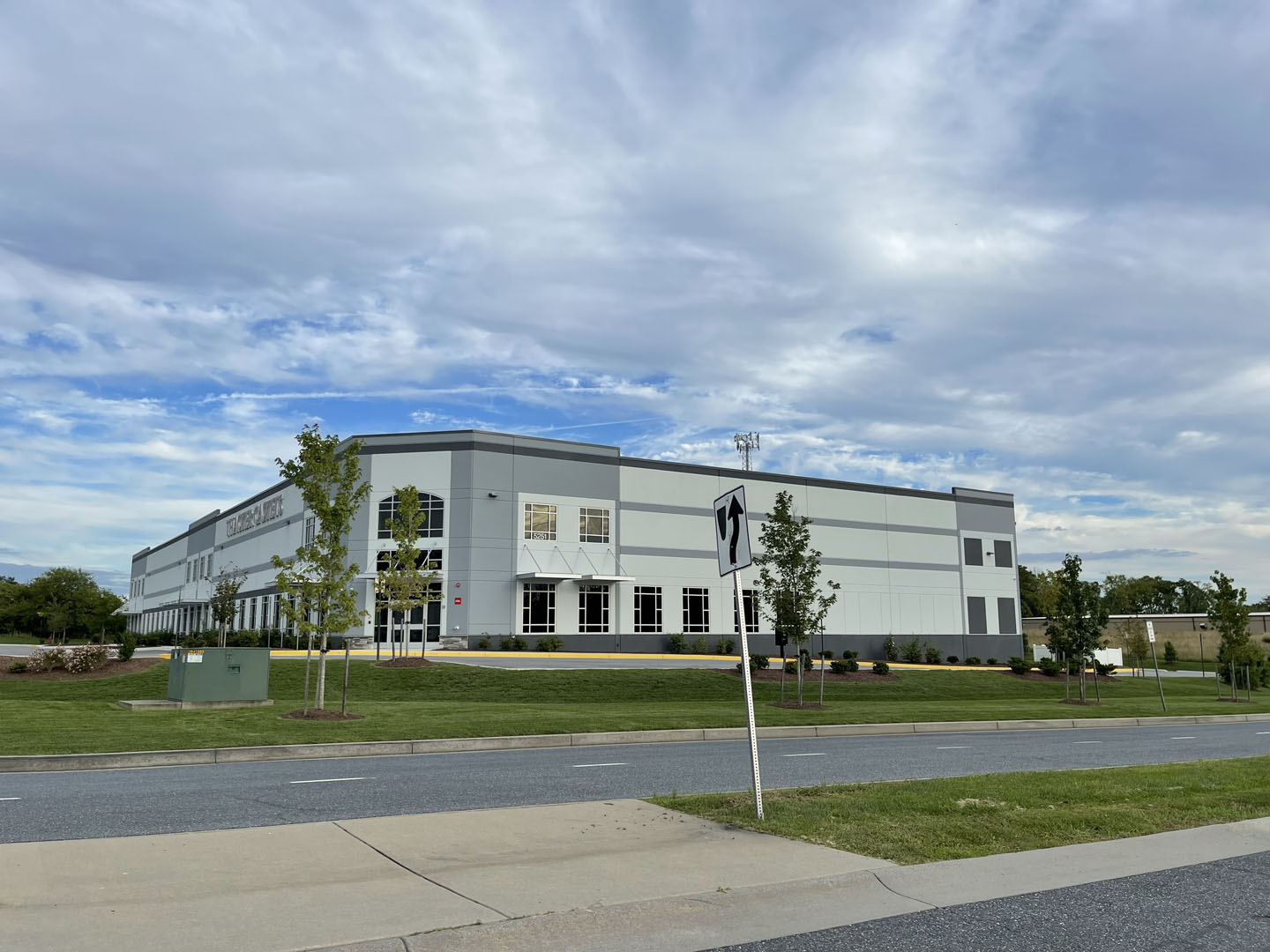 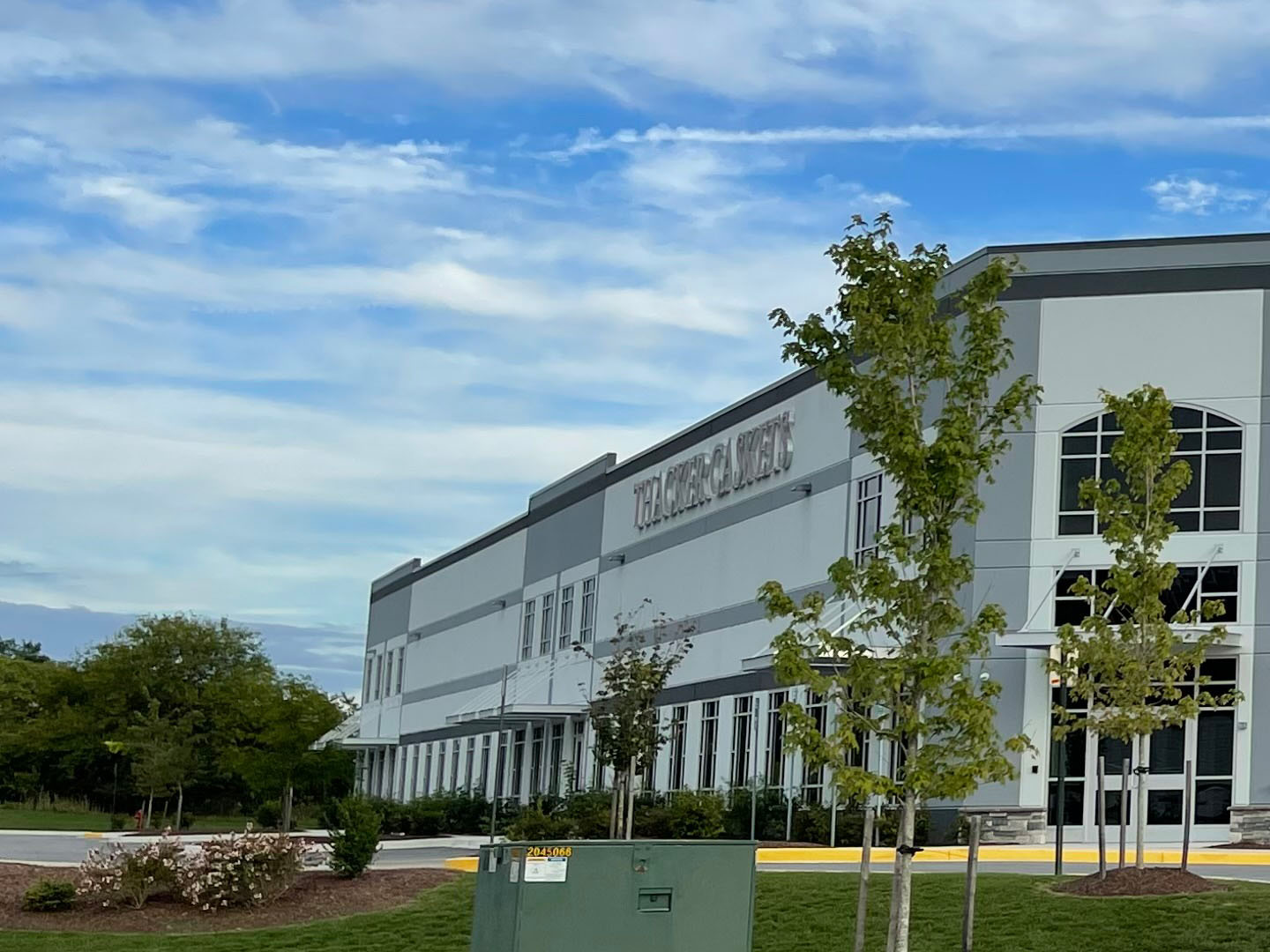 I like the lines of this warehouse if not the contents. I’ve never been inside. I imagine it is… striking.

I planted the last of the hosta hoard I was gifted. I transplanted about a dozen bleeding hearts. Their roots are so fragile. And I’ve begun transplanting Redbud tree seedlings. In time, there will be a grove of them.

This weekend, I’ll plant these beech tree nuts. I picked them up from the lawn of the Frank Lloyd Wright House in Buffalo.

There’s only one beech tree I’ve found up here in my little 28-acre forest. It’s been the subject of stories I’ve written here. Sadly, they have stalled. The word “book” is derived from the old Nordic word for “beech.” There’s a story there… somewhere. It just needs to be put down on paper. 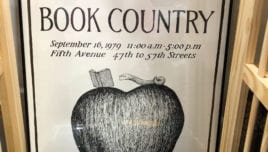 When I went back to the Honey and Wax booth, it was still there in the glass case. Booksellers use glass cases to highlight.. END_OF_DOCUMENT_TOKEN_TO_BE_REPLACED