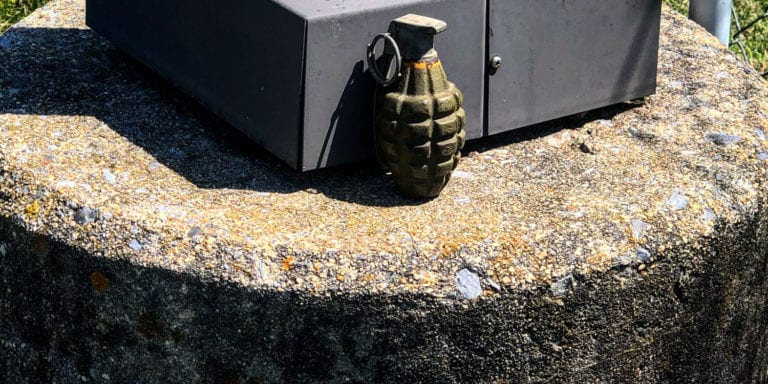 It is Friday again. Summer is 2/3s over. The desiccating heat of late June and most of July has turned to a quite temperate August.

Tuesday, August 18, early afternoon. The building is evacuated. A sorter found a hand grenade in a random box. She alerted Clif. He took it out into the dockyard and set it on a concrete pillar that is a base for a light pole far away from the building.

I called the police.

“We found a grenade at Wonder Book…”

We are waiting for the bomb squad.

The initial responder was a regular police officer. He asked if we were sure it wasn’t a paperweight. I assured him it wasn’t a hollowed out dummy. Clif told him it was very heavy. Everything pointed to it being the real McCoy. He went up to it and bent and inspected and took pictures. I supposed he texted the images to HQ.

“You better evacuate the building.”

I went inside and stepped to a wall phone. I pushed the paging button and made an announcement to everyone in the three-acre building.

“This is Chuck. We need everyone to leave the building through the front door.”

I went outside and briefed the 50 or so people on duty.

“The police told us to evacuate the building. I’m guessing this will take at least half an hour…”

I decided to go back inside to the docks should anyone come into the building. Truth be told, I also wanted to watch the process.

It is strange to be alone in the building on a weekday. Fans are blowing. The ambient music is playing. I’m surrounded by cartloads of books waiting to be packed.

This is costing a lot of money! Should I deduct the hours all those folks are being paid to stand around in the west parking lot?

Just another weird day at Wonder Book. But in 2020, the COVID year, it somehow makes perfect sense.

I’ve inspected the box it came out of. Under a layer of old sheet music it was a “perhaps-deceased-very-elderly-lady’s” box. Letters tied in ribbon from the 1950s. Old photos. Knitting. Church stuff. A few framed things, including a “Welcome to My Kitchen” cross-stitch. A small bundle of “Air Mail” letters with 1950s postmarks tied together with ribbon.

There was a World War 2 era military publication on hand-to-hand combat in the box as well.

My guess is it belonged to her long deceased husband.

The munitions guy is here. He’s not suited up beyond a vest, so it must not be the kind of unstable thing that would just go off. I thought they’d pull an armored truck up next to it, and a guy in full head to toe armor would get out. He would pick it up with long tongs and set it into a bombproof container.

He just walked right up to it. He bent and inspected it. The most notable thing about him was the heavy-duty eyeglass straps crisscrossing the back of his head. I suppose it wouldn’t do to have your glasses slip off your nose onto something explosive. He picked the thing up and fiddled with it. I suppose he twisted off the fuse or detonator or whatever. He went back to his truck and brought some devices and set them on the ground to scan the thing or something.

I was later told it was a WW2-era device. Mk2 or something.

There were eight police cars and a bomb-sniffing dog but not very much excitement.

It took about an hour and a half from my call to the police until we could go back into the building. The staff was paid to stand in the sun on the far side of the building and chat. At least it wasn’t very hot. I’d observed from inside the loading docks. It was 60 yards away, and there were solid concrete walls and steel dockplates between me and the bomb.

Afterward, one of the bomb squad guys asked to look around. He walked in and “oohed and ahhed” at all the biblio-chaos here. He quickly understood why we would have no idea of the source of the particular box the thing was found in. I had unpacked the contents of the box and laid them out onto a cart. He looked through the little display and became intrigued with the slice of life laid before him. He pulled a few letters out, and they were indeed from an Air Force Specialist in Denver talking about his training.

“What do you do with old letters like this?”

I looked at the sad little pile that was likely much of what was left from this woman’s time on this planet. They would have been just mildly interesting had she not had a grenade in the box with them. There was certainly nothing explosive in the rest of the box’s contents.

He took pictures of various things and said that was all he needed to know.

He straightened and looked around.

This place made no sense to him.

The world of bomb disposal makes no sense to me.

But we both serve a function in a civilized society. His can be much more…”immediate” than ours.

Thank God there are people out there who know how to do this kind of stuff.

Still, it was intriguing to see his interest in the historical artifacts linked to some soldier’s souvenir that disrupted the day here and made his day a little interesting.

Maybe he will become a collector.

When we were no longer a threat to the health and safety of the neighborhood, I thought about the little green pineapple-like hunk of metal that had made the day exciting.

In retrospect, perhaps I should have pulled the pin and tossed it down the Groundhog Hole to Hell.

Perhaps I could have once and for sealed off the portal that may or may not lead to the Giant Rat of Sumatra. I could even have become the hero that slew the beast!

As a kid, I saw countless movies and TV shows and WW2 documentaries where soldiers would toss a live grenade into a void and…KABOOM!

Fireworks hold no appeal for me at this age.

All week I’ve been working on the enormous Douglas Fratz Sci Fi and Fantasy collection of first editions and signed books.

Annika has made big piles of books she’s researched every day.

I need to look at each one and the Post It notes she has affixed to the front of each. If her data looks ok, I can just write our selling price on the Post It. Some comments I will highlight or draw an arrow to in order to get the data entry person’s attention:

“Review flyer laid in” for example.

Mr Fratz got a lot of review copies due to his work with fanzines and journals. A review slip or flyer from the publisher for an important book is an enhancement to its value. The publisher is reaching out to help the book get an initial audience. Knowing what the editors and promotion people feel are reasons why the book at hand should be read is data about a potential classic BEFORE it became a classic.

If she needs any training guidelines, it is easy to advise her right there.

It is a lot of fun. Kind of like eating popcorn.

Most of the books are in near perfect condition.

Unfortunately, there are almost no books published prior to the 1980s. That pretty much takes the potential for 4 and 5 figure books out of the equation.

Indeed, a lot of the books can be considered “hyper moderns.” These are so overpopulated on the internet that even firsts in great condition only sell for pennies. But not here! I’m putting old style (high) prices on them. Kind of in honor of the man who put this together.

Besides, the price will go lower and lower here until it finds its market.

We have now started a feature on the WonderBook.com website called the Collector’s Corner. It is not completely operational but is in beta testing. There you can search the Fratz Collection as well as other collectible subjects niches.

I hope it works. It has cost a lot of money and time to develop.

If this link works, you’re only seeing a tiny fraction of the books he collected. We have thousands and thousands more to add.

That’s pretty cool. We’ve earned it too. We never “bought” any followers.

In the 5 months (and counting) of COVID, I’ve done almost all the photos and posts. Many are from our storerooms of old leather and cloth books. These rooms contain books of no value other than their looks. Broken sets, forgotten authors, reprints, “hurt” copies. We are their last hope to stay “books.” This is via our #BookRescue division at BooksBytheFoot.com. Most of our clients there are professional Interior Designers, although the public is welcome to shop as well.

I’ve discovered people LOVE the pictures of the old stuff.

Maybe it is comforting.

I wish you could smell these rooms. There’s nothing like the scent of old books in a nice dry enclosed environment. It is kind of leathery…but there is no way to really describe it. If you ever want a tour, contact me. I love showing people around. But don’t just show up. The warehouse is not open to the public except by appointment.

I HAVE been sending a LOT of old books to the stores in recent months. The 3 bookshops are certainly open to the public—every day! (Except Thanksgiving, Christmas and whenever we are shut down by the Plague.) A lot of customers experience the OBS* in a less intense way at the stores.

I don’t do any social media besides Instagram. I’m too private, and I’m afraid I’ll say or do something very stupid. And I’m kind of shy. I hate pictures of myself and rarely show my face.

Here is a very rare selfie:

If you get a chance, check out @booksbythefoot for biblio-eye candy. If you “follow” us, who knows, you might become the lucky #10,000. There’s no prize, I’m afraid…lol.

Here’s a sneak preview to the next Round and Round story (#23.) I’m told people don’t read the second story on weeks when I’m driven to write 2. I suppose it could also be because the old bookseller stories are tedious… But I’m too impatient to hold it back. There are readers anxious to know what happens next in the weird old bookshop.

This is for both of you:

This story will be formally sent out on Tuesday—so if you receive notifications of these stories, don’t read it twice! 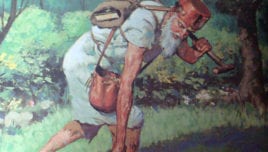 This story is all legend and faded memory... Almost immediately after entering the book business, I began hearing stories of Johnny G... END_OF_DOCUMENT_TOKEN_TO_BE_REPLACED